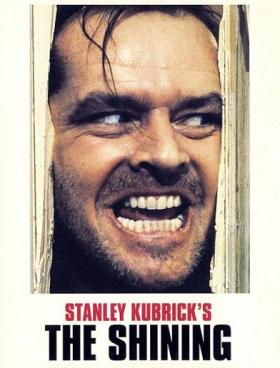 Have you ever had a movie in your life that has built up such legendary status that you almost don’t want to watch it? Stanley Kubrick’s The Shining was like that for me, but not always. Back in high school I tried watching it a few times, but kept hitting roadblocks. One time, a bunch of us were watching it in a friend’s basement where we were sleeping over. I think we got to the bathtub scene when a friend started freaking out and demanded we turn it off. I begrudgingly obliged and it wound up being the kind of movie that got swept away.

As I mentioned when reviewing Stephen King’s book, I picked up a DVD copy of the movie last year, but still hadn’t gotten around to watching it until today and you know what? I kind of didn’t like it.

I’m trying to separate my recent reading of the book from the viewing experience, but it’s kind of impossible at the moment because the book — which I loved — is still so fresh in my mind. I understand that, when adapting a work, you take some liberties with the source material, but there were so many that just seemed like odd changes. I’m sure there’s reasons behind those choices that we’ll never know the answers to or completely logistical ones, like Kubrick claiming to change Room 217 to 237 at the request of a hotel that didn’t want people to stop staying in the former.

The biggest mark against this film, though, is that I just didn’t care about any of the characters. I despise Shelley Duvall’s Wendy. She’s such a simpering, silly, cloying character with nothing really going on in the beginning of the film and just becomes a bawling, running maniac by the end. Meanwhile, Jack Nicholson’s Jack Torrence seems to have zero arc in the film. In the book, we’re more inside his head and understand that he’s really trying to become a better person, but wound up in a place that wouldn’t let that happen. We know that a part of him feels bad about what he did to Danny. But in this version, we only hear about that before he goes crazy from Wendy. So, is he ever really a good person or just a nutbag simmering just enough away from a roiling boil to get by? Plus, I’ve got to say, Nicholson’s portrayal goes a little over the top for me. There’s a cartoonish nature to what he does that it kind of taints the rest of the film from Wendy’s wandering around freakout to Danny’s Tony voice.

While watching I wrote something down along the lines of, “This movie has a lot of freaky visuals, but it doesn’t really go beyond that.” I then read in the trivia for the film on IMDb, that Stephen King said something very similar about the movie basically being a rad looking car with no engine. That really sums up the way I felt about this film at the end of watching. I totally understand why people get freaked out by elements of this movie. The girls in the hallway? No kidding, I think about that image every single time I stay in a hotel. The idea of the bathtub ghost still creeps me out (though it didn’t look as great in person as I remembered)  and the random people Wendy runs into all have a general air of off-ness to them.

And you can not argue that Kubrick and his people shot the heck out of this movie. It looks amazing at all times and includes some amazing shots. But, at the end of the day, I assumed I’d be feeling more than just a bit of ookiness from visual creepiness. 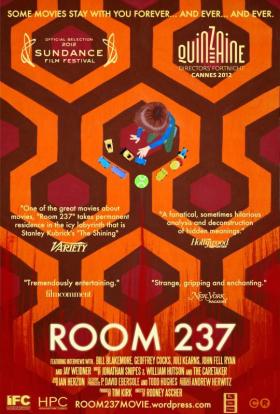 After watching The Shining and not being super happy with my experience, I figured I’d move on to Room 237, a documentary that showcases all kinds of theories about the film. There are basically two ways to judge this film as a viewer, you’ve got the actual theories presented by the interviewees and the way the film itself is put together. Regarding the former, I’m fairly certain some of these people are out of their minds. As far as the latter goes, I have some problems.

This doc presents itself in a way I’ve never quite seen before. Most of the visuals are clips from The Shining, other Kubrick films and what I assume is stock footage. Not so strange, right? Well, it is when you realize that you never, ever see the people talking. This makes it very difficult to figure out who is speaking and to which theory they subscribe. While they do get notified by text on the screen in the beginning, that’s the end of the identifiers.

Because the interviewees are only auditory participants in the film, that means that some actions described are represented by scenes from Kubrick’s films. This was pretty confusing in the very beginning when one guy was talking about going to see the film and you’re seeing Tom Cruise from Eyes Wide Shut going to a movie. I wonder if part of the motivation here is to replicate some of the off-ness of the film.

While watching, I had a pretty interesting realization: this movie feels like a podcast turned into a film. That might sound like a strange way to describe it, but there’s one part fairly early on where an interviewee interrupts what he’s saying to go tend to his crying kid. That makes me think that this thing was recorded aurally but not on video. There’s also a ridiculous amount of “ums,” “ahs” and “likes.” I’ve never cut together a documentary, but I have done a podcast. It can by a pain to excise all of those delaying words people use while trying to come up with their next thought or word, but doing so gives you a better final product in my opinion. The fact that those are still in there become even more of a negative strike when you realize they don’t have to cut around facial movements. Those cuts would be difficult when dealing with video footage, but much easier when working with pure audio (at least in my limited experience).

On to the theories themselves. One suggests that the film is about Native Americans, another the Holocaust and another about how Kubrick supposedly hid an apology for filming a fake moon landing. Other people don’t present theories so much as point out crazy inconsistencies in the films like the typewriter changing colors throughout the film, the impossible structure of the hotel and perceived clues supposedly hidden in various objects seen on screen. There’s a lot to unpack here and, to be honest, many of these people seem to have leapt to an insane amount of conclusions, but I will say that it’s amazing how much intense scrutiny this film has inspired in people. Still, I think that you could probably do a lot of similar digging into just about any movie.

Being a bit of a contrarian who didn’t enjoy the source film as much, there is a part of me that wonders if all of this film criticism is in response to the fact that Kubrick made a movie with amazing visuals, but completely unlikeable characters. Is it possible he just made a stinker? I doubt anyone in Room 237 would think so, but there’s a small part of me that think that might be the case.