My Pocket is overflowing with stories I want to read, so I figured I’d spend New Year’s Eve cleaning things out and creating one last Casting Internets post for the year.

One of my all-time favorite toys, Inspector Gadget for the spotlight on Fwoosh. I had two different versions of this toy, but both broke. Wah wah.

In 1963 a kid sent a bunch of authors a questionnaire about symbolism. Most of them said it just kind of happens, which I’ve always suspected. Thanks to my wife for sending me the link and Mental Floss for posting about it.

Back in October, Clive Barker wrote a piece for THR about the time he gave up on watching horror movies because the experience was just too intense.

This one’s also from October, but I loved reading Fred Armisen talk to Esquire about filming the above video with the Clash.

I heard about all the craziness that went down with the Kim’s Video VHS and DVD collection after the store closed on an episode of Killer POV, but reading the actual Village Voice story from 2012 is long yet fascinating.

Joe Dante’s using FundAnything to help make his next movie Burying The Ex starring Anton Yelchin and Ashley Greene. I don’t have any extra money, but I hope this one gets made. (via Deadline) 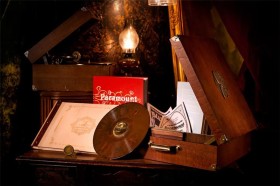 Jack White’s The Rise And Fall Of Paramount Records Volume 1 vinyl set is insane. Just look at it and if you have an extra $400 buy it from Third Man Records.

Esquire celebrated Nirvana Week back in October by talking to Rob Sheffield about the band’s lasting legacy. The Kurt Cobain/Taylor Swift comparison therein is pretty right-on.

According to Rolling Stone, there’s a never released Johnny Cash record from 1980 coming out called Out Among The Stars coming out on March 25. This seems like pretty good news to me.

Here’s something I never thought I’d write, but this Joe Jonas piece on Vulture is pretty intriguing.

And finally, enjoy 9 minutes of rad action movie lines. (via The Mary Sue)