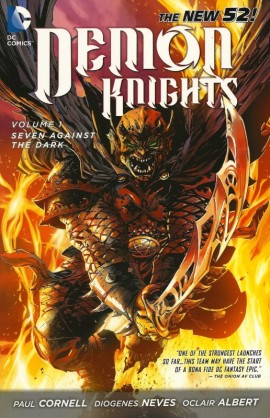 I tried unsuccessfully to start this review with an extended metaphor comparing DC’s New 52 initiative to dealing a deck of cards. It didn’t work out so well, but there is one aspect that I will stick with: Demon Knights is a nice shuffling of characters from different eras dealt together in a new context that play well together. In a lot of ways, this Paul Cornell book is what I was hoping for from more of these New 52 books, fresh takes on old characters that remain true to the characters while not relying on old continuity to tell tales.

And that’s basically what you get with Demon Knights, a book that finds known characters like Vandal Savage, Madame Xanadu, Jason Blood/Etrigan The Demon and Shining Knight along with newbies The Horsewoman, Al Jabr and Exoristos all hanging out in a town under attack from The Questing Queen (who I assumed was Morgaine La Fey) and Mordru in the middle ages. For various reasons, all seven stick around and decide to fight against the overwhelming odds set against them.

Cornell did some wonderful things with this book. Not only does it meet the rubric I mentioned above, but it also does such a good job of introducing all of these characters, balancing their various stories and also telling a tale in seven issues that feels complete while also leading into something else. So many of the New 52 books I read feel like stepping stones or incomplete stories which isn’t bad in and of itself when you’re dealing with monthly comics, but you can’t ignore the fact that so many of these books had creative shake-ups and what not. It’s nice to feel satisfied with a story that also works as a larger chapter.

On a similar level, the book works kind of like something along the lines of JLU or one of the other animated adaptations of these larger comic book universes in that it takes elements I’m familiar with and does different things with them that work because they’re in a completely different setting. I’ve read Jack Kirby’s Demon and then Matt Wagner’s mini, a number of various Savage appearances, Grant Morrison’s Seven Soldiers and also knew enough to figure out who Exoristos was pretty easily. That familiarity didn’t hinder my reading of this, but also wasn’t necessary to enjoy the comic.

Also, while the Seven Samurai-ish set-up of this story isn’t the most unique thing in the world, this comic does something that a movie like 13 Assassins doesn’t in that you learn about the characters as the threat looms, not ahead of time. When you’re watching a “let’s hire assassins” movie in that case or “let’s band together to fight dragons” comics, you kind of want to get right into the action. Cornell does that while also taking a few tangents to get more into characters like Shining Knight and Horsewoman before swerving back around to the big time action.

Artists Neves and Choi also came together to tell a really dramatic, big cool story packed with swords, fire, demons, dragons, robot dragons and priests getting their faces burned off. So much goes on and their kinetic, but clear styles really work well with the material.

All in all, I’m happy to keep this book in my collection. I’d like to get the other books before the series got cancelled and will at some point, but unlike so many other trades I read, I’m not worried about whether the rest of the series will “ruin” how I feel about this one because it stands so well on its own.