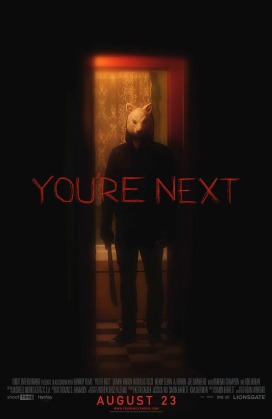 I don’t watch nearly as many horror movies as I used to. Part of that is the season — I find myself wanting to watch action flicks or dumb 80s comedies when it’s warm out — but a much larger part is the fact that I have two kids who not only hog the TV, but also sap the energy out of me. Because of that, I cherish my movie-and-TV-watching a lot more than I used to. I’m much less likely to spend that time watching something bad or untested. I’d heard a lot of good things about You’re Next from director Adam Wingard by say of the excellent Killer POV podcast, so when the movie popped up on Netflix Instant, I was in. Not only did I actually watch the whole thing in one sitting (wholly uncommon these days), but I also really enjoyed the experience.

The basic plot of the film is that a rich family meets up at the parents’ request for a weekend that includes boyfriends, girlfriends and spouses. Unfortunately for the assembled, a trio of murderers wearing masks — wolf, tiger and lamb — decide to start taking them out one by one. What the attackers don’t know, though, is that one of the girlfriends, Erin (Sharni Vinson from Step Up 3D!), also happens to come from a family of preppers and can more than take care of herself.

One of the complaints I heard on Killer POV was that the prepper reveal felt a little clunky. I’ve got to disagree. She displayed plenty of crazy abilities (not only being able to kill a man with a kitchen mallet, but also knowing ways of keeping the house and its inhabitants safe) and only explained herself when asked by one of the other girlfriends. This seemed earned to me. How else would a 20-something college student of any gender know how to do these things, especially in a crazy situation?

I think one of the reasons the film was so appealing to me was that I’ve often thought about stories where the killer chooses the wrong people to take on. That’s obviously a major component of the slasher genre in respect to there being a survivor or two. Obviously that person had skills that kept her or him alive, but what if they really picked on the wrong person, in this case a strong young woman who’s perfectly prepared to knock their blocks off.

All in all, You’re Next offered up a solid round of performances from the whole cast, a story I hadn’t seen before and kept me entertained long enough to watch the whole movie in one sitting, so for all that it gets the UM seal of approval.