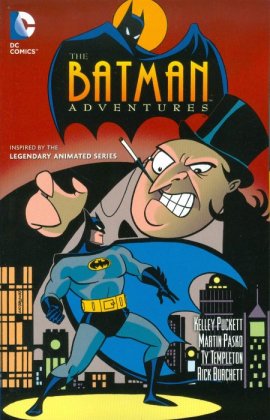 In a recent post over on my dad blog PopPoppa.com, I reviewed the delightful Batman ’66 Volume 1, a series set in the same universe as the 1960s Adam West TV series. I noted that the series would be a pretty great place to start if you were looking to give younger kids a good jumping on point for Batman. While it does have a good deal of crime, it’s very much in-line with the tone of the TV series which means its lighthearted, fun and also very funny.

I’m always looking for comics that I can read to my daughter when and if she’s interested in going down that route, so when I was at the library, I also picked up the first volume of The Batman Adventures which was amazing, but not something I’ll be passing along to my kiddo at this point. I wasn’t super surprised because the cartoon this is based on — Batman: The Animated Series — is also kind of dark.

That being said, though, these are still some pretty great Bat-comics that would be great for an older kid or anyone interested in checking out the Dark Knight’s comic book exploits. The series kicks off with an already-established version of Batman running around Gotham putting a stop to hooligans like Penguin, Catwoman, Joker and the rest. I appreciated that writer Kelley Puckett avoided the tired idea of going through Batman’s origin in the first issue. Everyone knows who Batman is and why he does what he does, it doesn’t need to be reiterated and isn’t. I also appreciated that, even though the first three issues can and do stand alone, they also work as an overarching drama that pits Bats against some of his greatest foes.

These 10 issues show exactly why Batman is the kind of character that people have been reading about and following for 75 years. He does whatever it takes to save people while also showing that he has a heart. While reading these issues ostensibly written for children, I found myself thrilled with Batman’s exploits, worrying about people and even feeling bad for bad guys like Killer Croc and Clayface. These delightful adventures are brought to life by a quartet of artists who do a killer job working within the style presented by the TV series. I’m actually a big fan of Mike Parobeck who drew four issues going back to the Justice Society Of America miniseries’ he worked on in the early 90s that introduced me to a team I’ve loved ever since. If you’re looking for a continuity-light, easy access series of Batman comics to read yourself or pass to an interested party, I can’t recommend this collection more!

I’m also giving Adventures Of Superman Volume 1 a big thumb’s up. This is a series that appeared digitally first, then collected into single issues before being brought together into a trade. Unlike The Batman Adventures, this book is actually an anthology with a variety of killer writers and artists doing Superman stories from a continuity-free place that has no connection to existing media (ie, it’s not based on a TV show or cartoon).

The beauty of these stories is that they come from such a creative place. When it comes to a hero like Superman who has been around forever and is an important part of DC’s publishing plan, you can get to a place where the comics and stories feel artificially manufactured or even half-assed. But, because these are short stories brought to you by some of the best and brightest this industry has to offer, you can feel that — even if you don’t necessarily dig the tale — it came from a truly creative place.

AOS is also nice for people like me who have a long-standing love of Superman, but don’t care for what’s been done since DC restarted the continuity a few years ago. I’ve said that “my” versions of a lot of these characters aren’t being published anymore (but thankfully still exist in the 20 longboxes sitting in my garage), but many of the stories in this collection have that feel which is really nice.

If you’re a Superman fan who feels like your favorite hero is constantly written off as a Big Blue Boring Boy Scout, I’d say that Adventures Of Superman Volume 1 is the perfect book to hand to someone as proof that that is not the case. Yes, he’s a great hero, but he’s also a great character whose adventures I don’t think I’ll ever get tired of reading.