When I started reading Superman comics, the character was about six years out from his post-Crisis reboot which de-powered him a bit and made a conscientious effort to make him the last Kryptonian (hence a clone Superboy and extra-dimensional shape-shifting Supergirl). Another major tenet of those days was that Superman because Superman as an adult. This was the Superman I knew, though I also understood that the Golden and Silver Age were jam packed with elements that didn’t fit into that rubric. I try my best to keep an open mind for Superman stories that don’t fit into that mold, but sometimes they throw me for a loop. Luckily, I didn’t have that problem with Geoff Johns’ retelling of the Man of Steel’s life in Secret Origin.

Johns worked with the amazing Gary Frank on this miniseries after they teamed up on Action Comics a few times. Essentially, this is the definitive origin story for the post-Infinite Crisis DCU which has since gone the way of those aforementioned older ages. Still, there’s plenty of Superman-fueled goodness in here for people to dig into.

The first issue is set in Clark’s earlier days when his parents reveal his alien origins to him. He’s mad about the whole thing, but still uses his abilities to help people when he can. We also find that Lex Luthor grew up in Smallville too and even encountered Clark. My favorite part? Young Clark doesn’t like the Superboy costume his mom made him, which makes perfect sense when you think of a modern teenager running around with his underwear on the outside. In the next issue, Clark heads to the future to hang out with the Legion. I wish Frank could draw a thousand issues of Legion comics, I really do, he’s perfect for them.

The last four issues follow Clark as he gets to Metropolis and working at the Daily Planet while also revealing himself to be a hero. One of the interesting things that Johns does in this book is take some of the classic elements and making them make sense in more modern times. The costume thing is part of that, but so is the fact that the Daily Planet is still a paper that exists (instead of all the ones that have closed down in the past decade). For my money, that’s one of Johns’ strongest talents, integrating old craziness and making it work even in a world where aliens come to Earth and save the day all the time. I even like what he did with Metallo and Parasite, though I’m not a fan of the former’s design this time around (you can’t like everything, right?).

So, no, this isn’t MY Superman (everyone has their own) but it still tells a great Superman story that’s not unrecognizable. One of the problems I’ve had trying to read the New 52 Superman books is that he just doesn’t seem like Superman to me. This is still on point and fits in with what I like about the character: he’s the ultimate orphan who still wants to fight for his larger family, humanity. 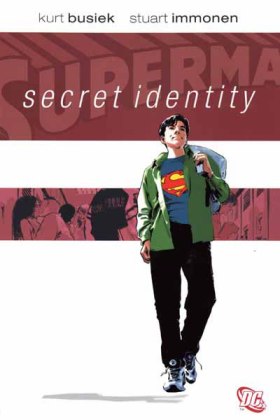 Superman: Secret Identity is one of those books that everyone loves and I just never got around to reading. I actually have the last three issues in a box out in the garage, but wasn’t going to fully skip the first issue. Luckily, the library had a copy, so I dove in right after Secret Origins.

This story by Kurt Busiek and Stuart Immonen is actually about a person named Clark Kent who’s in a version of our world. His parents named him that as a joke because everyone knows about the comic book and pop culture icon. But, after a mysterious meteor hits nearby, Clark gets Superman-like powers and starts experiencing some of the fictional hero’s ups and downs.

In a way, this book reminds me of Paul Cornell’s Action Comics story “The Black Ring” in that you find yourself learning about Superman by comparing him to the character you find yourself reading. This version of Clark follows some of the fictional version’s path, but he also finds himself living in a simpler world than the one in the comics, but still one filled with a certain amount of danger for him and his eventual family. He also deals with concepts like secret identities in ways that feel more realistic than some of the ways they are dealt with in ongoing comic book series’ that not only try to keep things interesting year in and year out, but also come from a variety of different minds and voices.

As it is, Secret Identity is a wonderful take on Superman from two very distinct, but complimentary voices in Busiek and Immonen. I was familiar with the artist’s work on books like Adventures Of Superman, but here he keeps his figures smaller and more realistic, while playing more with darkness and shadows than I remember him doing in the the mainstream superhero work. Together he and Busiek nail that real-person-dealing-with-the-unreal idea that the writer has become famous for in his comic book career.