I have very little experience with horror films from other countries. I could illustrate this fact by naming the very few foreign horror films I’ve seen, but it wouldn’t be overly impressive. Ever since I started reading about horror on the internet, I’ve heard about the Italian masters from the 60s and 70s like Dario Argento, Lucio Fulci and Mario Bava. I’d only actually seen four movies from that trio– Black Sabbath, Zombie, Mother Of Tears and Suspiria, my most embarrassing post ever — so I figured it was time to remedy that.

Luckily, Amazon Prime has a ton of Bava’s films available to stream. I’d seen the poster for Hatchet For The Honeymoon (Il Rosso Segno Della Follia or Blood Brides) before so that seemed as good a place as any to start. This one’s about a fashion designer named John Harrington (Stephen Forsyth) who explains in voice over that he enjoys killing young women. As he follows his murderous passion, we come to understand that he’s trying to recreate a traumatizing moment from his childhood so he can understand what really happened. He’s married to Mildred Harrington (Laura Betti) who embodied the idea of fierce decades before that Project Runaway kid and tries to hook up with and then murder one of his models, Helen Wood (Dagmar Lassander). In other words, he’s basically Dexter or Patrick Bateman before things start going downhill. 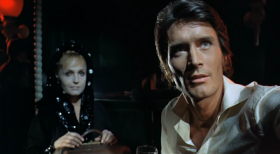 In Harrington’s case, his decline starts when SPOILER kills his wife. It happens at about the halfway point a fuels the rest of the film, but it still resides in SPOILER COUNTRY. Anyway, the cops are sniffing around which is bad enough (his models keep disappearing, so naturally he’s asked a few questions), but the worst part? Mildred appears in all her fierceness as a ghost that only he CAN’T see. John rolls into a club trying to hook up with some ladies, but they  get freaked out because his wife’s right there. I love this turn on the haunting idea because I’m fairly sure I’ve never seen or read that bit before! I’m far from the most well-read or -seen person around, but after years of movies, books, shows and especially comics, a new take like this is pretty rare and appreciated. I also liked how Mildred could just change the rules whenever she wanted. As much as I love a good set of rules, it also bugs me when supernatural elements are supposed to have hard and fast ones. They’re ghosts right? I like when they can do whatever the junk they want, whenever they want.

My personal experience watching this movie was kind of funny and shaped how I think about it now. As the work-from-home parent of two kids I’m pretty busy even with my mom coming over to watch the kids from about 10 to 5 every day. In other words, I wind up dozing off quite a bit while trying to watch these things.

In the case of Hatchet, I fell asleep right after John offs Mildred. So, on day one I was feeling the usual towards him. But, turning it back on the second night, I came in with a cleaner slate and almost felt bad for him for being haunted. I literally had to remind myself, “Yo, he MURDERED her. That’s why she’s haunting him. He deserves it big time!” Once that clicked I was back into the headspace Bava and company intended for me and was along for the ride. I only mention all this because my concept of a giallo is a gonzo piece of filmmaking that’s all over the place, which was the case for me as I watched it, though not in a way the filmmakers could have planned for.

I’m pretty happy with my first giallo viewing experience in years. The soundtrack was fantastic. Bava’s a master director with a lot of interesting tics that I’ll be watching for in his other films (he really loves the zoom, the colors are a bright delight and he frames his scenes beautifully). Also, while this wasn’t as bloody and gory as I thought it would be, it still had some delightfully deranged violence accented by highly entertaining performances. And yeah, it’s gonzo at times. What would you do if your dead ghost wife was haunting you and you were trying to nail down your next victim? Probably not run into your creepy mannequin room stocked with dresses and the like. But that’s exactly what John Harrington does! (By the way, I have a friend named John Harrington, so every time he was mentioned by full name, I giggled).

After this fun viewing experience, I’m definitely staying on the Bava train.Lisa And The Devil will be next, maybe followed by one of his non-horror flicks.