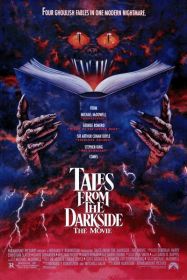 Early this month I worked on a list for CBR that might eventually get published about the best classic horror movies to stream on Netflix and Amazon Prime. That lead to me watching Tales From The Darkside: The Movie for the first time and I think it’s up there with Body Bags as one of my all-time favorite horror anthology films!

That got me thinking about the George A. Romero-produced TV series than ran for four seasons from 1984-1988. Basically, a new take on the Twilight Zone/EC Comics, these half hour episodes offer a variety modern horrors many of which (at least in the first two discs) revolve around then-new technology like word processors, answering machines and multiple phone lines.

I got the whole series from the library which meant I only had it for about a week. With such a short tie allotment and a lot of other things I wanted to watch, I only got through about two discs. most of which came from the first season. Even so, I feel like this is one of the best modern scary anthologies around and deserves more attention, but also an eventual full watch by yours truly.

Much like my beloved Tales From The Crypt, I appreciate how this show can be downright creepy in one episode and then off-the-wall funny in the next. Here’s a few thoughts on the episodes I caught.

The pilot, “Trick Or Treat” features an old man holding most of the debt in a small town who allows kids to go through his house on Halloween to find all the IOUs and wipe out the debt. He uses all kinds of great special effects in his place to scare the crap out of them, but ultimately gets his in the end.

Boy, “The New Man” is a glorious story the plays with your head. There are so many possible explanations for who or what’s really going on that it makes it a joy to experience and (I assume) watch over and over again. “I’ll Give You A Million” and “Pain Killer” were solid, but then you’ve got Danny Aiello literally gambling with his life in “The Odds.” Gosh, he’s a great actor as is his counterpart in the episode, Tom Noonan (Frankenstein’s Monster in Monster Squad!).

The terribly named “Mookie and Pookie” stars Justine Bateman AND Tippi Hedrin. More importantly, the episode really jumps into the new realms of supernatural occurrences that could come from all the new technology popping up in the decade. The same can be said of “Word Processor Of The Gods,” adapted from a Stephen King story a few episodes later. He returns in the last season for the chilling phone-centric “Sorry, Right Number” and the Harry Anderson-starred “All A Clone  By The Telephone.”

Things got funny for a pair of episodes called “A Case Of The Stubborns” and “Djinn, No Chaser.” The former stars Christian Slater as a kid whose grandpa is literally too stubborn to believe he’s dead until he sneezes part of his face off. The latter, based on a Harlan Ellison story, plays like a fast paced comedy about a couple ruined by a cranky genie played by Kareem Abdul-Jabbar.

Finally, there’s an episode called “Slippage” that really hit home as David Patrick Kelly’s character realizes he’s basically coming undone from reality as the people all around  him — his wife, friends and even mother — stop recognizing him. That kind of story has always kicked me in the gut and, I think, works particularly well in the TV anthology format.

Oh, one other thing I wanted to mention that struck me as interesting while watching these episodes: the characters and actor skew surprisingly old. Sure, you’ve got young talent like Slater and Batman, but the first few episodes mainly star not just adults, but people middle aged and older. You really don’t see that much in television or horror these days, but I think it adds something to the scare factor. Like, if this can happen to the seemingly established or unflappable, then what about us?!