Mr. Dastardly and I mix it up with George A. Romero’s amazing Night Of The Living Dead, Dawn Of The Dead and Day Of The Dead, a true trilogy of terror.

Listen here, if you dare!

If you like the show, rate it on iTunes or leave a comment here on the site. 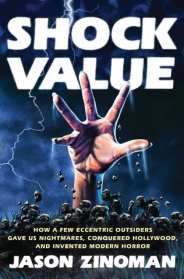 If you’re keeping track, and I’m not sure why you would be at this point, I’m still muddling through Stephen King’s The Stand. And yet, I stray away from time to time to check out other books like Jason Zinoman’s Shock Value, which I stumbled across while looking for various horror films in my library’s database. With a subtitle like How A Few Eccentric Outsiders Gabe Us Nightmares, Conquered Hollywood, And Invented Modern Horror, how could I not bite, especially around Halloween! END_OF_DOCUMENT_TOKEN_TO_BE_REPLACED

As I mentioned yesterday, I got to an early start when it came to watching horror movies this fall. So, I’ve got a lot to talk about! First, if you haven’t already, check out a pair of lists I wrote for CBR. One’s about movies and shows to follow Stranger Things up with while the other focused on the best classic horror movies to stream on Netflix and Amazon Prime!

END_OF_DOCUMENT_TOKEN_TO_BE_REPLACED

Early this month I worked on a list for CBR that might eventually get published about the best classic horror movies to stream on Netflix and Amazon Prime. That lead to me watching Tales From The Darkside: The Movie for the first time and I think it’s up there with Body Bags as one of my all-time favorite horror anthology films!

That got me thinking about the George A. Romero-produced TV series than ran for four seasons from 1984-1988. Basically, a new take on the Twilight Zone/EC Comics, these half hour episodes offer a variety modern horrors many of which (at least in the first two discs) revolve around then-new technology like word processors, answering machines and multiple phone lines. END_OF_DOCUMENT_TOKEN_TO_BE_REPLACED 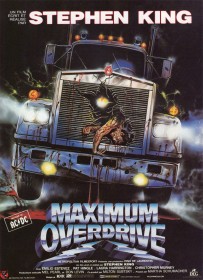 As I mentioned in my Stranger Things-inspired post, I’ve been watching a lot of horror films lately. And you can’t have a mention of that Netflix series without thinking of Mr. Stephen King, now can you? Well, I read and listened to a crazy number of his novels earlier this year (and am still sloooooowly working my way through The Stand) but I’ve also watched a few of the films he’s worked on.

While flipping through movie options on TWC On Demand I saw Maximum Overdrive as an option and immediately turned the film on. Usually, I spend a ridiculous amount of time thinking about my choices, but this was nearly instantaneous. END_OF_DOCUMENT_TOKEN_TO_BE_REPLACED

Goodness gracious! I was looking through my unpublished drafts and found this post about the rest of the horror movies I watched during October. There’s some good stuff in here, so let’s jump back in time a few months and think scary thoughts!

After a super busy September and October, I’m still catching up on all of the movies I watched for work and fun. After focusing on new films early on in the season, I decided to go through my movie collection and Netflix to make a list of films I wanted to watch leading up to Halloween. The list had a total of 26 films, though I wound up removing five. All told, I watched 13 plus the seven films making up the original Halloween franchise. I’m saving a few of them for another post, but I did want to throw out a few thoughts about what turned out to be a major rewatch experience.

As it turned out, zombies were a huge part of this year’s list. Dawn and Day Of The Dead easily made the list along with Dance Of The Dead, the Dawn remake and World War Z. I didn’t get to those last two, but I keep seeing more and more things in those two Romero movies that I love. I’ve been seeing a lot of people dump on the zombie genre lately. To them I say, watch those two movies. They are amazing films, not just horror flicks. Meanwhile, I still have a great time with Dance which is just super impressive when you take into account it’s a low budget film that doesn’t look it. This is easily one of my favorite zombie movies from the past few decades. END_OF_DOCUMENT_TOKEN_TO_BE_REPLACED

Towards the end of last week I was looking through my Netflix Instant queue and realized that a whole bunch of movies I wanted to watch were going to leave the streaming service on July 1st. That day has come and gone and I got to watch three out of 20 films, which is just about what I expected to get done.

One of those movies was Tom Savini’s 1990 remake of George A. Romero’s Night Of The Living Dead. I realized as I was cueing the movie up that this was actually my first foray into the world of Romero’s films (even if tangentially) and very well might have been my first straight-ahead zombie film. I remember getting the movie from my beloved Family Video and taking it over to my buddy Andy’s house for an overnight movie marathon. I didn’t remember too much, but that scene where Johnnie gets tackled into the grave stone has stuck with me forever because it came out of nowhere and looked so damn real.

This time around I might have been able to see some of the movie magic involved in that particular scene, I was actually much more taken with the plot of this film. I’m not saying that the remake will ever take the place of the original in my heart, but there is a whole lot to like in this version which goes a few different places the original doesn’t. Those differences are important and, as far as I’m concerned, the only reason to do a remake. You’ve got to have something new to say or do, otherwise, what’s the point?

The set-up of this film is the same as the original in that Barbara (Patricia Tallman) and her brother Johnnie (Bill Moseley) heading way out in the middle of nowhere to put flowers on their mom’s grave. While there they encounter their first zombie. Barbara escapes and runs to a farm house where she meets fellow survivor Ben (Tony Todd), basement dwellers Harry (Tom Towles), Helen (McKee Anderson) and Sarah Cooper (Heather Mazur) and young couple Tom (William Butler) and Judy Rose (Katie Finneran).The group must not only deal with the oncoming hordes of the undead, but their differing opinions on how to stay alive.

I won’t get into all the differences between the films because, honestly, my memory isn’t solid enough to do that without watching the original right after the remake and I had Death Wish sequels to watch, so that’s not happening. Plus, since I saw this one first, the details stick in my head more than the original even though I’ve seen that one far more times. But, the main difference that makes me think this remake has its own value comes in the form of Barbara. While the original version of the character is a screaming mess throughout most of the film, this new version goes through a fantastic metamorphosis that starts where the original character began and changes her into an incredibly capable, bad ass character.

I noticed while watching this time that her evolution can be documented by the clothing changes she makes throughout the film. In the beginning she’s wearing a dress. Not long after she meets Ben, she’s putting on socks and boots. Later she pulls pants on under her dress and eventually she ditches that garment altogether and rolls with just a white tank top. With each wardrobe change, you get the feeling that she’s adapting more and more to this crazy new world she’s a part of. Some people might read this as a kind of “man-ification,” but I saw the changes are coming from a place of pure practicality, but then again, I hate gender-based labels.

So, if you’re a Romero fan who shies away from the many (MANY) remakes of his films or just someone who missed out on this 1990 offering, I’d say give it a shot. Maybe wait until the original isn’t so fresh in your mind, but try to go in with an open mind and look for the good changes within.  Plus, this being a Savini joint, it’s got some rad gore effects and actually looks really great all around. I wonder why he doesn’t direct more.