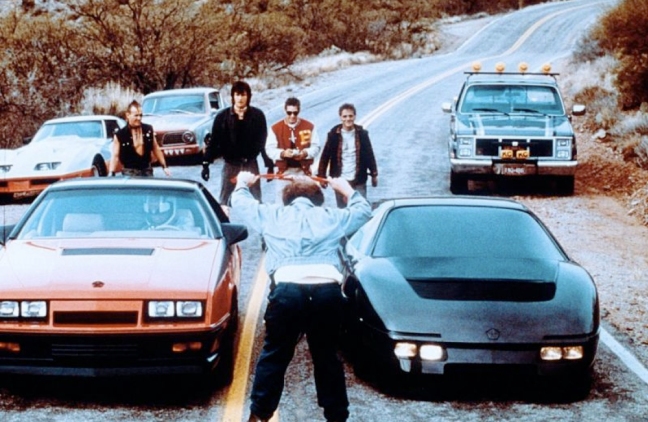 Don’t you hate when a quick synopsis of a film completely undercuts the actual story? That’s what happened when I decided to watch Mike Marvin’s 1986 teen drama/sci-fi/car/revenge film The Wraith on Netflix. In one sentence, the streaming service undercut a major plot point in the film, albeit one that will probably draw people in. Then again, looking at the film’s advertising campaign, they weren’t exactly trying to keep the identity of the film’s mysterious strange much of a secret.

So what I’m saying is that, if you like the kind of off-kilter, bonkers movies I do, then just check it out without reading or watching anything.  If you think a movie with a masked driver using his futuristic car to take out local punks and mid-80s performances by Charlie Sheen, Sherilyn Fenn, Nick Cassavetes, Clint Howard and Randy Quaid, then just watch it on Netflix without reading the spoiler-filled description sentence. I’ll get into more of the details in the following paragraphs.

Sheen plays the new guy in town named Jake who, like any red-blooded heterosexual male, immediately develops a crush on Fenn’s Keri. The problem with that is that local psychopath Packard (Cassavetes) considers her his girl and threatens to pummel anyone who wants to make time with her. He’s got other things on his mind, though as the aforementioned masked man in the wild car keeps killing the mooks in his car-loving gang. All of this takes place in some really interesting locales in Arizona like the rocky swimming hole the kids float around on, the drive-up burger joint complete with roller skating waitresses and Packard’s gang’s remote auto club.

On more than one occasion, the mystery man appears in the car, indicates he wants to race without showing his face (or even helmet) and then the festivities begin as one of Packard’s lackeys anxiously hops behind the wheel to prove himself to the lunatic. The race moves along at a nice pace until the black car puts itself in the way of the other and explodes, only to reappear fully functional not long after as you can see in this clip.

The victims’ corpses appear untouched aside from missing eyes, which is a super creepy touch. There’s also something about braces forming on the mystery man (or maybe they disappear?), but that’s never explained. Oh, another time he just shows up at Packard’s chop shop and blasts the place with a sci-fi gun that IMDb trivia will surely explain the make and model of if you’re curious. He doesn’t actually kill anyone in that scene, just causes a lot of damage. Apparently he likes to keep that part of his life firmly on the road.

As all this goes on, Jake and Keri continue to hit it off and Quaid’s Sheriff Loomis tries to figure out who’s killing his town’s most dangerous teenagers, but Packard’s gang doesn’t feel like helping out until it’s too late for most of them. Okay, we’re getting all spoilery in this graph, so there’s that. As it turns out Jake is actually Keri’s dead boyfriend Jamie who was killed by Packard and his goons. In other words, it’s The Crow but with a car and an even more confusing mythology. Yes, I know The Wraith came out a decade before The Crow film and even a few years before the comic, but it’s the quickest culture touchstone as far as plot goes.

Anyway, after he takes care of his unfinished business, Jake drops the car off with Jamie’s brother Billy and then rides off with Keri on a dirt bike. She actually makes out pretty well in this thing if you think about it. Not only does she get an upgraded boyfriend (I mean, come on, it’s mid-80s Sheen, sorry other dude), but she also gets that psycho Packard off her back. It’s a real win-win.

So, yeah, The Wraith is bonkers and a bit all over the place. I mean, Sheen’s acting varies between “believable cool guy from the 80s” and “reading these lines off of the back of my hand.” Aside from him, I’d say everyone else commits fully to the project, which is admittedly confusing and complicated. Aside from Clint Howard’s character calling the mystery driver a wraith, there’s no talk about how this kid came back from the dead better looking than ever or questions about why his supernatural car doesn’t disappear when he’s done with his mission or why he gets to stay alive in his new bod after cleaning up the bad guys. I’d actually love to see another story, probably just a short, that fills in a lot of these questions and even introduced the powers behind this revenge-resurrection concept. But, it’s a weird, fun concept with interesting locations and a great soundtrack plus awful bad guy bullies who get what’s coming to them. That’s a ride I’m usually on board for.