After enjoying Mario Bava’s Hatchet For The Honeymoon so much, I decided to jump right into Lisa And The Devil (Lisa e il diavolo) because, well, that title is amazing.

I will admit right away that I watched this movie over several days because I kept falling asleep after only getting about 20 minutes in. I almost quit on it actually because it was moving a bit slowly and I honestly wasn’t sure if I’d retain enough of it to give a solid review. Then, I went back a bit and played it during the day while working and, well, it got awesomely crazier!

So, as you might expect, the movie is all about Lisa (Elke Sommer) whose on holiday in Spain with a friend having a great time until she sees a painting of Telly Savals as a demon that freaks her out. She leaves the museum, walks a maze of backstreets and eventually comes to a store that Savalas is in. After wandering some more she comes across a man, his wife and their chauffeur. They all drive until the car breaks down outside a mansion where Savalas is the butler to an old Countess and her son Maximilian who looks a LOT like Ian Sommerhalder.

Not content to let them fix the car and be on their way, the chauffeur mysteriously goes missing while Max starts talking to Lisa like he’s her long lost love. Oh and Savalas has a strange affection for mannequins that look like the people who keep popping up at the house (a few others appear out of nowhere as the story progresses).

Lisa And The Devil gets WEEEEEEEEEIRD at the end. Like way weird. It might have been slow and a bit odd leading up to about the halfway point, but then it’s all dream sequences, mannequins, hammers, scissors, lollipops, the Countess (who is sometimes blind, maybe?), long-dead corpses, a demon speech I should have paid more attention to, airplanes and even more mannequins.

Alright, let’s get SPOILERY here. The last 20 minutes or so of this movie are amazingly insane. There’s no way I understood it all, but I still liked it, so there’s that. Anyway, after seemingly killing everyone, Maximilian heads to the dining room where all the mannequins are sitting waiting for him (this time they’re the actors made to look like dummies instead of the other way around). As he’s understandably freaking out, his mom (who he just murdered) appears, which sends him flailing out the window. Lisa — who spends a lot of the end of the movie unconscious — then wakes up in a crazy-overgrown version of the house, gets back to her hotel, grabs her stuff and winds up on an airplane…where the only passengers are the dummies. The shock of this causes her to turn into a…man? An old woman? And crumble to the floor.

WHAT?! I spent a lot of this movie asking that very question, but it didn’t bother me too much. I think the part in the beginning where she’s wandering around Spanish back streets could have been cut down. I like that it plays off of stranger-in-a-strange-land fears, while also mixing in the demonic, murderous humans and classic scary house elements all in one big ball of weird wax. It also features the few Bava basics I noticed while watching Hatchet: his penchant for bright colors, hauntingly compelling actresses and zoomy zoom. 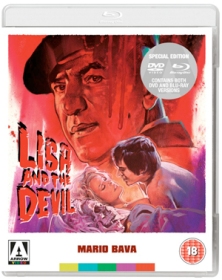 If you haven’t already read about it on the internet like I did, Lisa has a pretty crazy history. It bombed in Italy, so the producer decided to capitalized on the popularity of The Exorcist, by cutting in a bunch of new scenes where the characters were possessed and calling it House Of Possession. That version bombed here in the States, so it wasn’t until 1983 that the original debuted over here and even then it was on TV. Both versions came in a nice Arrow UK set a few years back, but that’s currently out of print. You can rent them on Amazon Prime or buy the newer (and still in-print) Kino Lorber set that looks pretty tasty. I’d like to give the re-cut version a watch and also circle back around to this one eventually. Up next, I think I’ll check out a non-horror deep cut like The Giant Of Marathon, Hercules In The Haunted World, Roy Colt and Winchester Jack or The Knives Of The Avenger.