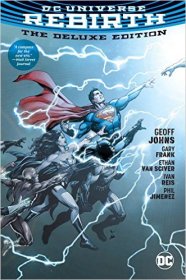 I remember back when DC first announced the New 52, I was talking with a friend who said something along the lines of, “I get offering new readers a jumping on point, but they’re also giving longtime readers a clear jumping off point.” I hadn’t thought of it like that at the time, but that’s basically what happened. Sure, I’ve gone on with a few books here and there, but overall, I didn’t have the desire to really dig into the DCU because it wasn’t the one I remembered, cared about and spent decades with.

I started with the DC Universe Rebirth one-shot which is now collected in its own book. I’ve now read this Geoff Johns story twice. The first time, it didn’t do much for me, but the second time around I had a lot more fun with it. The basic idea is that the Wally West from the previous universe wants to enter this one and appeared to a variety of individuals in an effort to make a connection, and also set up a variety of books to come.

The funny thing about this book is that it repeatedly addresses the problems with the New 52. Wally says that a darkness infected the universe and that love had been missing. Pandora tells an unseen attacker that hope could still prevail before he or she kills her. There’s also the matter of missing years and characters. But, the most controversial part of the book came with the hints that Doctor Manhattan of Watchmen fame made all the bad things happen. I believe that’s being dealt with now, so we’ll see how that goes. Including those characters in the now-main DCU doesn’t offend or intrigue me without actually seeing how they’re used. 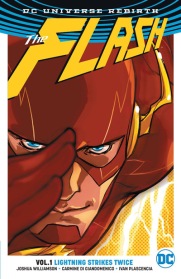 So, moving on from the launch point, I figured I’d read what seemed like the most set-up book of the bunch: Flash by Josh Williamson, Carmine Di Giandomenico, et al. With Wally making his way into the DC 52 Universe, I assumed he’d be a big player, but instead he jumps over to Titans, which makes sense, though I haven’t read that book yet.

Where does that leave Barry Allen? He’s still the always-late CSI tech with super-speed, but in this first batch of issues — Flash Rebirth #1 and the first eight issues of the ongoing — he finds himself sharing the lightning with lots of people in Central City including a cop buddy of his. That’s strange enough, but then he’s got to deal with another speedster trying to kill all of the newbies.

Ultimately, I wasn’t super into this book. The story felt like it could have been cut down a few issues. To be fair, I’ve read a lot of comics, so when all of these people started getting the star of the book’s powers, I figured it wouldn’t last. The identity of the bad guy also seemed kind of obvious to me. Additionally, I had some trouble getting into the art. On one hand, Di Giandomenico’s style has this kinetic nature that accentuates the character’s abilities kind of like a more loose Scott Kolins, but that level of looseness lead to some disconnect with me as a reader. And yet, I’m curious to see what happens with that world’s Wally West as the series continues. Plus, as I’ve seen online, this is one of the books that eventually digs more deeply into the Watchmen connection.

Moving on, I’ve been a Green Arrow fan since Kevin Smith brought him back from the dead way back when. I was fully along for the rides offered by Brad Meltzer and Judd Winick, but fell off sometime during the Green Arrow/Black Canary series. I’ve heard good things about Jeff Lemire’s New 52 run, but haven’t gotten my hands on it yet. Still, I was curious to see what Benjamin Percy, Otto Schmidt and Juan Ferreyra had in store.

The first five issues, collected in Green Arrow Volume 1: The Death & Life Of Oliver Queen, not only feature our hero teaming up with Black Canary, but also questioning his place in the world as a rich guy trying to use his vast resources to help the unfortunate in Seattle. While doing so, he runs afoul of a super creepy organization that sells people and another than burns them. Said groups then target Oliver using people he thought were on his side.

All-in-all, I thought this was a nice set-up for an ongoing series, though I do have questions about how some of the characters know each other. Like I said above, I’m almost completely unfamiliar with the New 52 Green Arrow, so I wasn’t sure if his sister had a deep history, what happened between Ollie and Diggle and what’s up with Shado. At this point, I don’t know if those are answers that come down the line or references to stories that have already happened, but I’ll be back for more when those trades hit the library.

One of the interesting things about the way I read comics now, almost entirely in trade format that I get from the library, is that the idea of value gets removed from my mental equation. When I was buying comics, if a book didn’t strike my fancy in a designated number of issues, I was out and probably wouldn’t come back unless something crazy happened or there was an intriguing creative shift. Now, since I’m not paying for these things, I look at them more like I do television: is it worth my time. With all three of these books, even given the issues I had — I didn’t feel like I wasted my time. Ultimately I had fun and, while I didn’t like everything, I had fun with what I did like and am intrigued enough to come back for future installments.