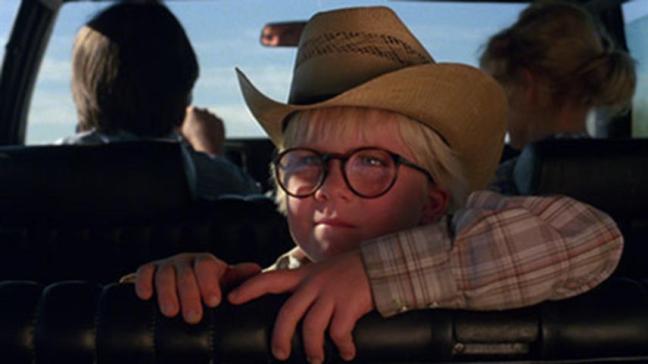 Anyone even remotely familiar with this blog and my tastes will know that I have a lot of love for stories revolving around kids dealing with enormous dangers they have no business getting involved with. Most of my favorites harken back to my days of watching movies like Goonies on TV and the like, but I’ve been lucky enough to discover a few new ones as the years have rolled on. I want to say Cloak & Dagger was the last, but now we can add Dick Richards’ Death Valley to the list!

I first heard about this film on the Pure Cinema episodes focusing on Scream Factory Blu-ray favorites. Host Brian Saur brought up Death Valley and said that the Richard Rothstein-penned filmstarred a pre-Christmas Story Peter Billingsley being stalked by a guy in a weird car out in the desert. Sold. Literally. In fact, when Scream Factory had their awesome half off sale a few weeks back, it was one of three titles I bought. The other two were Night Of The Comet and Assault On Precinct 13 making Death Valley the only blind buy of the bunch and, I’m happy to say, it paid off.

The movie starts with Billy (Billingsley) walking around his home town of Manhattan with his dad, played by Rory’s grandpa from Gilmore Girls (Edward Hermann). At the end of all that they have a strange conversation about the divorce between parents. You’d think Billy would know what’s up considering his mom — Catherine Hicks — tells him they’re going out to Death Valley to visit her boyfriend Mike (Paul Le Mat). But, hey, whatever.

As you can imagine, Billy’s not exactly excited to see Mike, even though the guy does a pretty good job of trying to show him around. Almost immediately this crazy gold car starts following them and doesn’t let up for the whole movie.

It soon becomes clear that this particular area has a problem when it comes to random people winding up cut open. Billy stumbled upon a piece of evidence in a seemingly abandoned trailer that he gave to Sheriff Wilford Brimley that kicked off an investigation into the potential killer. All of which works to bring us outsiders into what the locals seem to have known for a while. 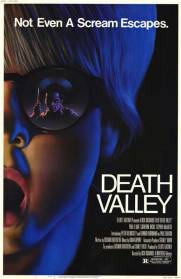 What surprised me the most about this film is that it is, fully, an R-rated slasher/action film. The killer has a penchant for slashing throats and using pointy objects to try and kill folks. He also kicks off a pretty epic shoot-out towards the end that some really interesting, unique and strange moments (he throws a bumper through a window at one point that’s presented in very loving slow-motion.

All around the movie reminded me of the aforementioned Cloak & Dagger — because of the well-known kid actor character in real trouble — but also Steven Spielberg’s fantastic adaptation of Richard Matheson’s Duel. It’s just so big and open and scary anyway, then you add in the psycho killer and the fact that his target is this LITTLE kid and you’ve got the kind of movie that will freak me out. The bigness of the setting and the tininess of the kid really struck me as this movie got going.

Having said all that, I highly recommend keeping your eyes out for the Scream Factory Blu-ray of Death Valley. This one doesn’t come with as many special features of other Scream offerings, but it’s also listed at only about $16 on their site. There is a commentary with director Dick Richards that I’m excited to check out in the not too distant future.