Thanks to an email from one of my editors, I realized it was New Year’s Eve! Funny how that works out. These might be coming out a bit later than the norm, but I figured I would jump in on the whole “End of the Year” list thingy. First up, I’m going to cover my favorite horror viewing experiences of films that came out several years back! 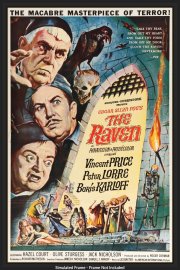 One of the most fun and surprising viewings of 2019 came when I decided to finally watch the first film in Scream Factory’s second Vincent Price blu-ray set when I checked out The Raven (1963)! I’ve already written about the experience of viewing this one for the first time and I just want to reiterate how wrong I was going into this picture. Just look at that poster! It looks like Roger Corman’s taking his then-usual approach of doing straight-ahead Poe adaptations. Instead you get a hilarious comedy where Vincent Price is the straight man, Peter Lorre’s wandering around with bird wings and Jack Nicholson gets possessed and shows some early bonkers tendencies that would become commonplace down the line. Plus, Boris Karloff’s an imposing force and I always like seeing him do his thing out of makeup! If you haven’t seen this one, fix that as soon as possible.

I don’t know about you guys, but I love combing through Amazon Video and finding some truly weird delights. Simon Wincer’s 1980 release Dark Forces (a.k.a. Harlequin) was one such find. The description said something about a politician’s life getting flipped upside down Fresh Prince style when a mysterious figure makes his way into his family. In a way, it’s kind of like Mary Poppins by way of The Omen in that a guy named Wolfe (Robert Powell) works his way into this family by appearing out of nowhere (as a clown) and healing a boy’s illness.

I’d say it gets crazy from there, but it’s actually nuts from jump. The opening credits cut between scenes of a politician dealing with the press and his son’s ultra-depressing birthday party which ultimately leads to his introduction to Wolfe. From THERE, it just keeps getting crazier and crazier as the leather-clad Wolfe goes up against the politican’s fancy, upper crust friends with absolutely no shame or concern. I won’t get into the how’s or why’s from there, but if you’re looking for something somewhat low-key with wild imagery and scenes that will keep you constantly guessing, give Dark Forces a watch.

When it comes to Hammer Horror, I don’t have a lot of experience. The whole “slow burn, something’s happening in an old house, but nothing too exciting” idea doesn’t grab me too much. Even with that in mind, though, I did pick up a Christopher Lee Dracula 4-pack to fill in some of those gaps. This spring, I decided to give Dracula A.D. 1972 a watch and had a great time with this ball of trippy, vampy weirdness directed by Alan Gibson and starring Christopher Lee, Peter Cushing and Stephanie Beacham.

This one kicks off with a period-specific fight between Lee and Cushing that leads to Dracula’s death only for him to be resurrected in London’s swinging ’70s by a cult leader calling himself Johnny Alucard. Never one to stray too far from a Van Helsing, he runs back into Cushing, but also his daughter Jessica, who hangs with Johnny. I absolutely adored this very of-the-moment film that attempted to inject modernity into a series of films that can, at the very least, be considered tired and stuffy. 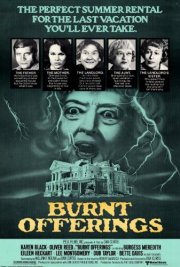 A few years back, Kino Lorber had a sale that I just couldn’t pass up. In addition to a passel of Vincent Price films, I also grabbed a copy of Dan Curtis’ Burnt Offerings (1976). This is one of those films that achieved a kind of legendary status in my mind, but I can’t remember why! Luckily, it turned out to absolutely live up to and even surpassed my expectations (which were vague and amorphous AT BEST).

The film features a couple played by Karen Black and Oliver Reed agreeing to take care of an old mansion — and the strange old woman who lives in the top floor (Bette Davis) — with their son in tow. Things are not perfect in the household which leads to uncharacteristic friction between them all, which seems to be doing something to the house itself. Will it be too late for them to get out and what’s with all those photos? Find out by watching this movie which does an incredible job of creating the perfect mood without being too obvious (it took me longer than I’d like to admit to pick up on some of the changes). You won’t be disappointed, but you may not look at a pool the same way again afterwards.

I was incredibly lucky this year when a very good friend set me up with an international PlayStation 4. In addition to opening up a whole universe of games, it also gave me the means to watch international Blu-rays. So, when Arrow had a sale, I jumped up and down like a crazy person and ordered all sorts of goodies, including the 1982 slasher Pieces from director Juan Piquer Simón ! This one had also garnered a huge profile in my mind, but I remember that it came almost entirely from my favorite horror podcast Shock Waves.

I was a little nervous about a blind buy like this, but it was an absolute delight as a bananas slasher film. It’s got a killer who lost it as a kid when his mom found his dirty puzzle, a college kid who gets WAY too involved in the police investigation into the eventual killings and a totally random bit of martial arts from the college’s kung fu professor. Oh and also one of the more interesting colleges around, leading to wildly unique scare scenes that stuck with me to this day!

Finally, at least as far as new watching experiences go, I finally checked off an all-time classic from my “Gotta See” least: Joe Dante’s The Howling (1981). As with Pieces and Burnt Offerings, I had heard a lot of hype, but as the film went on, I realized I knew, essentially, nothing about the story aside from the fact that it involved werewolves! I already knew I loved Joe Dante’s work going into this one, but I was so damned impressed with the way he handled this story of a reporter falling into a world of lycans, mystery and betrayal starting from the incredible in medias res opening!

This cast also absolutely kills it across the board from Dee Wallace in the lead to co-stars Patrick Macnee, Dennis Duggan, Belinda Balaski, Kevin McCarthy, John Carradine, Dick Miller and beyond. I’ve always thought of Dante as the kind of director who knows how to have fun with his horror — The ‘Burbs was one of my first forays into the genre as a kid without me even realizing it — but The Howling is a scary, intense film that kept me on my toes the entire time. Plus, you can’t disregard the raw, gut-wrenching transformation scenes expertly crafted by the legendary Rick Baker. I still love An American Werewolf In England, but this one might be my new favorite werewolf flick!

Finally, my absolute favorite old horror watching experience of the year came a few months back when my buddy Rickey came up from the city and we went to a horrorthon at a nearby drive-in. We may have only watched Sleepaway Camp and the original Pet Sematary there before bailing (The Exorcist just didn’t seem like the kind of flick we wanted to watch on an increasingly cold fall night at midnight). It was the very first time I’d ever seen a favorite horror flick on the big screen and it was with one of my best pals, what could be better?!