After liking Jim Wynorski’s The Return Of Swamp Thing, one film jumped out to me in his filmography: Chopping Mall! It is befuddling to me that I have yet to write about this film on here, though Mr. Dastardly and I did cover it on our short-lived double feature podcast. It’s an easy favorite from this era that I discovered well after the fact. I’m not sure how hard it is to get your hands on the Lionsgate Vestron Blu-ray, but I recommend it! 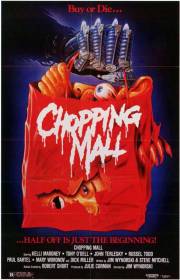 As a child of the 80s and 90s, I was raised on robots, unlike my grandchildren who I assume will be raised by robots. From Transformers to Johnny-5 they were everywhere and they were glorious. I even got hints of more grown-up mechanical beings like Robocop, but wouldn’t see his full film until my teen years. I now have a computer in my pocket that can answer questions and turn my lights on, so we’ve kind of achieved that dream, but not in the delightfully clunky way I assumed it would happen as a child!

And “delightfully clunky” might be the perfect way to describe Jim Wynorski’s Chopping Mall, a mall-set horror-action-sci-fi-comedy that pays homage to several other Roger Corman-produced films (and not just the ones whose posters grace the walls of the restaurant in the beginning of the picture). We start with a killer mall montage and then cut to a mall meeting attended by Eating Raoul‘s Paul Bartel and Mary Woronov (get used to seeing her name in these posts this year!). The mall, which doesn’t actually seem to have much of a crime problem, will now be patrolled by robots at night.

Kinda weird, but whatevs. Let’s meet our leads, Alison (Kelli Maroney) and Suze (Barbara Crampton). They work at a restaurant that’s both run by and frequented by creeps. Suze convinces Alison to come to a party being thrown by her friends in the mall furniture store. This gathering gets uncomfortably hot and heavy for anyone who wasn’t a movie teen in the 80s, but all hell starts breaking loose because, earlier, lightning hit the mall robot guard controls and now they are straight-up murderers. Now the “kids” have to figure out how to survive against a supposedly superior foe!

This is probably the fifth or sixth time I’ve seen this movie and on this watching, I found myself really enjoying the comedy. I even got to wondering if Wynorski could have been a solid funny filmmaker if he wasn’t so damn horny, because even his Swamp Thing sequel had it’s moments. I guess we’ll never know. Anyway, this is the most perfectly 80s cast around and I think they play their parts perfectly. Crampton is an all-star in everything and Maroney is one of my favorite actresses from this era, plus she makes for a smart and capable final girl. This film might also feature my favorite cameo of all time wherein Dick Miller returns as Bucket Of Blood star Walter, who is now a mall janitor who is picked on by…other mall janitors. Two more quick connections: Ace Mask from Return is one of the mean janitors and technician Gerrit Graham will also pop up more than once!

And what can be said about the kilbots themselves? They’re big clunk goofballs that look sort of like that Nintendo robot R.O.B., which I’m a big fan of. Clunky? Sure. Silly? Definitely. Do I still love the needlessly complicated ways they take out teens who decided to get down in a mall furniture store? Absolutely. 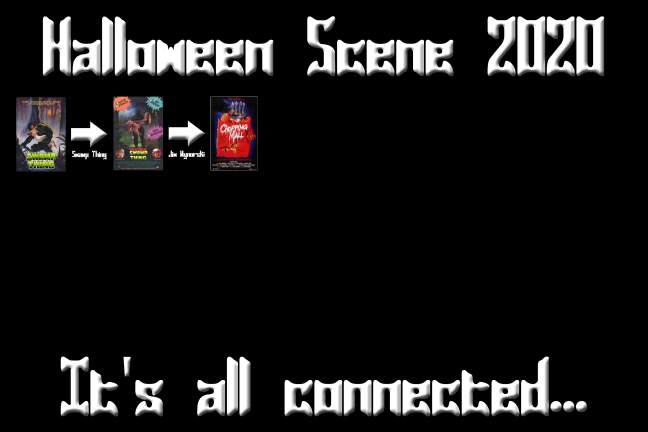