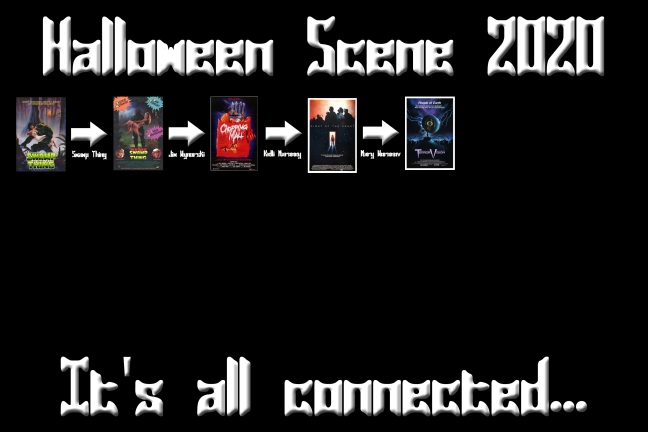 Having watched Night Of The Comet, I found myself wondering what to watch next for It’s All Connected 2020. Unlike with everything else going back to Return Of Swamp Thing, I didn’t have an instant path I wanted to follow. And then I started going through the excellent Mary Woronov’s filmography and a somewhat new old favorite jumped out at me: TerrorVision!

A bananas mix of E.T. by way of Mac & Me‘s beginning but with goopy monsters and swingers, Ted Nicolau’s TerrorVision is the absolute epitome of heightened insanity. Every character in this thing is a cartoon and I could not be happier about it. Parents Raquel (Woronov) and Stan (Gerrit Graham) are status-obsessed 80s swingers who have built a pleasure palace…that also houses their teenage Madonna wannabe daughter Suzy (Diane Franklin), but also a retired military grandpa (Bert Remsen) with his own fall-out shelter down the hall and the young Sherman (Chad Allen) who is equally obsessed with all things military.

As the film opens, Stan is busy setting up his gigantic new satellite dish. Actually, that’s not quite right, the film actually opens on a nice looking model of a prison planet where they’re zapping away a monstrous law-breaker. That thing gets bounced around space and winds up in Stan’s dish and then his house which is a real bummer because he and Raquel brought      home a couple to play with.

Little do they know that the monster is already running amok in their house or that it can perfectly replicate anyone it comes in contact with. Ultimately, the monster uses this trick a number of times to fool just about everyone and results in a scene with all of the adults in the film in one bed together and the kids walking in. It’s funny, weird and disturbing, which is — I think — what Nicolau was going for. The character of Suzy’s boyfriend O.D. (Jon Gries, a.k.a. Uncle Rico from Napoleon Dynamite!) really solidifies this for me because, yes he’s an over-the-top 80s metal head dude, but he’s also a nice guy and is judged as being silly by the 70s holdover dad as he polishes his medallion (not a euphemism).

O.D., Suzy and Sherman all spend a great deal of time — probably too much, really — trying to teach the alien monster about normal Earth living only for them to discover that he is a full-on alien murderer. It’s an odd choice in a film jam-packed with odd choices that I absolutely love because it’s crazy. This is a perfect example of the kind of movie that we just don’t get anymore because it has a wildly unique vibe, but is also silly, funny and surprisingly good when it comes to monster and gore effects.

I honestly have no idea how popular TerrorVision is. I’m sure I’ve heard people talk about it, but not prominently. This is now the third time I’ve written about it here on UM, first in 2011 and then in 2016). I initially caught it on streaming services, but have since picked up Scream Factory’s rad double of it and The Video Dead. And, while I thought about using that as my connection between films, I instead followed one of the actors to another film that can be described as wild and all over the place tonally!