Masters of the Universe Classics

Last week, I showed you all a detailed view of half of the mostly-monsters toys I lined up in my office this year to get into the Halloween spirit. The first batch included a Masters Of The Universe Classics giant, one of Jack Kirby’s hottest creations, Buffy, a trio of Stranger Things characters, my guy Beetlejuice, a pair of Hellboys and horror icons like Frankenstein’s Monster, Freddy Krueger and Pinhead! Want to see who else made the cut [cue cleaver chopping sound effect]?

END_OF_DOCUMENT_TOKEN_TO_BE_REPLACED

I don’t add a lot of toys to my collection, it’s pretty much down to just DC Universe Classics and Masters of the Universe Classics with a few other purchases here and there. Lately, Mattel and the Four Horsemen have been absolutely murdering it when it comes to the MOTUC line. The last four figures I’ve gotten have been amazing. Chief Carnivus, Whiplash, Roboto and now Grizzlor. I don’t even know who Carnivus is, but I love that figure. Same goes for Roboto, a figure I was a huge fan of as a kid, but didn’t make it through my childhood. I’ve still got an arm here and there from him, but not the whole figure. I love figures with interior gears that you can see move. But this post is about Grizzlor, a character I don’t actually remember from childhood, but actually picked up the original figure last summer at a flea market. I knew I was in for a risk considering it’s a hairy figure and could have been covered in germs, but I bought it anyway.

When I got the new Grizzlor in the mail, it actually creeped the missus out and she didn’t want it even touch it, but I immediately fell in love with the figure. Just look at how crazy he is! I especially like the weird 90s Kid n Play hairdo he’s sporting. I had an immediate childhood flashback when I opened the figure to see the green monster crossbow thing. I have a ton of those in my toy box, but couldn’t remember which figures they belonged to. Fun stuff. With so many swords and weapons, I’m glad the Horsemen designed the back of the figure to hold all those figures. It makes him look way more badass. 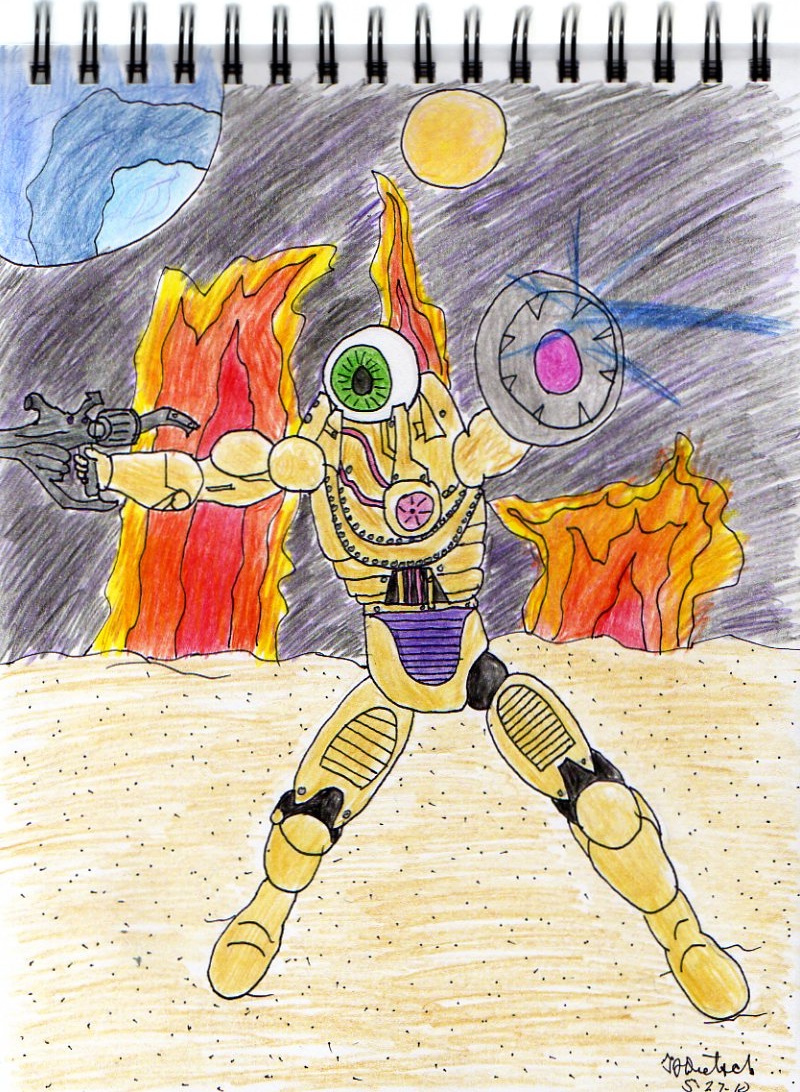 I posted the black and white version of Optikk here a couple days back and mentioned that I spent some time coloring it with colored pencils. When I was done, I didn’t quite like how it turned out. I conceived the fire mountain/geysers in the back while I was drawing and wish I would have thought it out a little better. Dividing the sections of flame in pen may have been alright in black and white, but I don’t think it works as well for coloring. It was fun coloring some crazy alien stuff that didn’t necessarily have to be based on natural color schemes and blending the colors for Optikk’s armor was fun. I learned some stuff from the process and will hopefully remember them next time I break out the colored pencils. 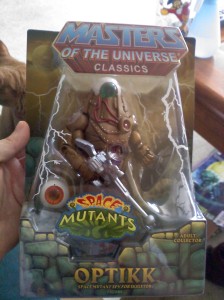 I got my Masters of the Universe Classics Optikk figure in the mail the other day and it inspired me to draw him in a cool action pose on a strange planet. I have absolutely no knowledge of Optikk’s deal aside from the fact that he’s a Space Mutant from the Adventures of He-Man cartoon. He could be good or bad, I’ve got no idea. Anyway, here’s the drawing. I colored it with colored pencils which might have been ill-advised, but I’ve got stuff to do and will scan it later. Enjoy.

Being a freelance writer who works from home I’m pretty much a shut in except for the days I head to the coffee shop (which are basically Mondays and Thursdays), I get wary when the doorbell rings. I live in a condo complex, so sometimes I’m hearing the neighbor’s bell and sometimes, like one day last week, it’s a nice old man who wants to save my soul. Today the doorbell rang twice and both times were awesome. The first was the postwoman delivering my order from MyComicShop which filled holes in my HERO, Richard Dragon, Young Justice and various Justice League series’ (every single post-Crisis/pre-JLA comic, it’s pretty epic). The second was this: 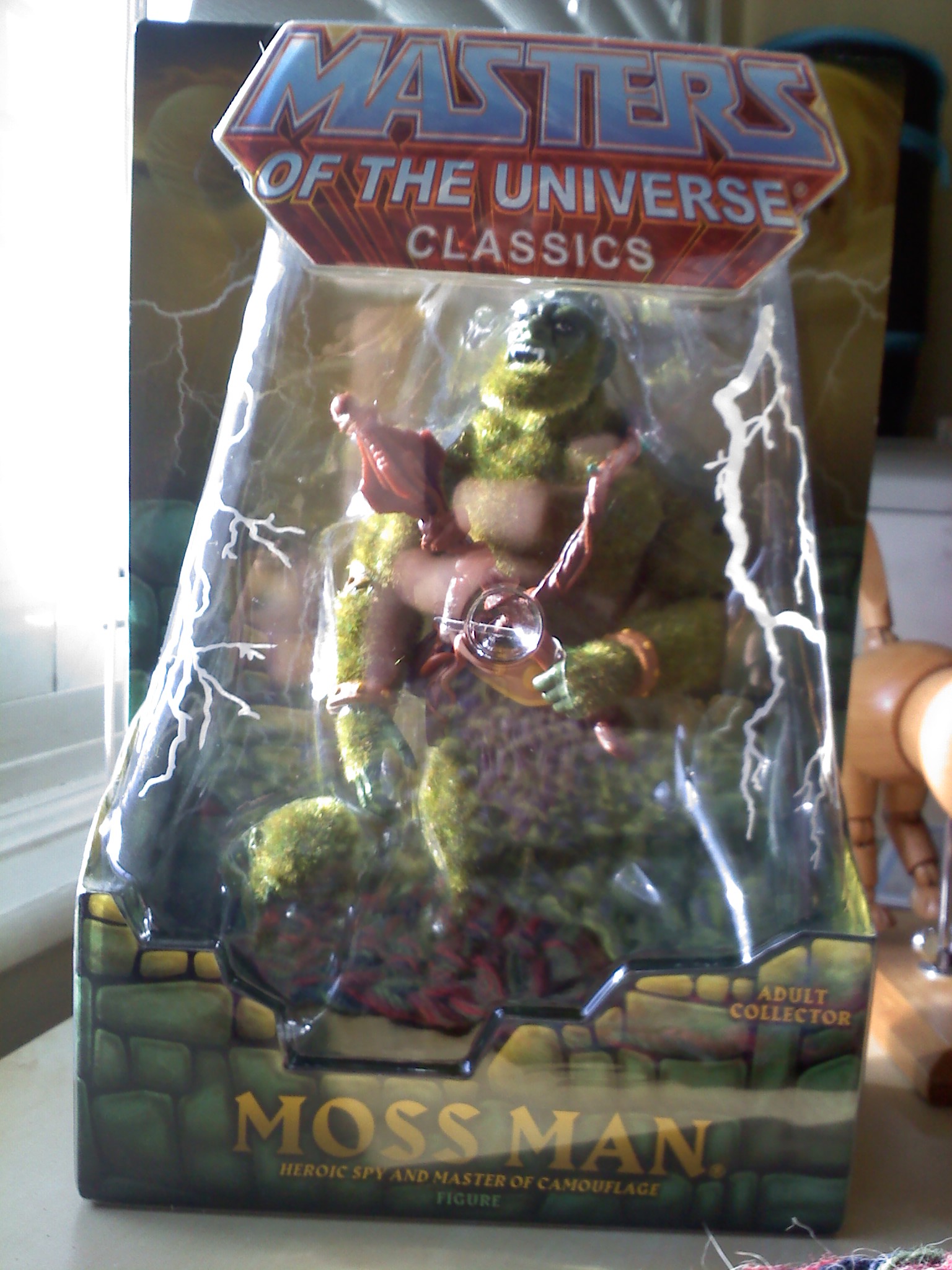 MASTERS OF THE UNIVERSE CLASSICS MOSS MAN! Oh snap. The first thing I noticed when opening up the brown box that the familiar MOTUC white box comes in is the pine smell seeping through the boxes. Man, it’s pretty strong. I don’t remember the toy smelling when I was a kid. I don’t know if it wore off or maybe I got one without it, but he was flocked as a mother trucker. Being one of my favorite original He-Man figures, this is so far my favorite of the group of Masters Classics figures I’ve gotten.

I’m not sure if you can read all the text from the bio, but it basically says that Moss Man is the Swamp Thing of the Masters of the Universe universe. That’s pretty rad. I’m hoping Mattel will start doing something with these characters like a new comic or a video game. That would be sick!

Moss Man here comes with two heads, a bludgeon weapon of some kind (do these things have an official name, I remember tons of He-Man toys coming with them) and a vine satchel with a removable knife. And, of course, he’s flocked (which means he feels fuzzy). Between the pine smell and the feel of the flocking, I got very strong Christmas vibes from him and wished he came with a tiny Santa hat. The articulation doesn’t seem to suffer at all from the flocking as I bent him in some pretty crazy positions and he stands really well. I’d imagine if I were to get all my MOTUC figures out and play with them on the floor in front of the TV for hours like I used to when I was a kid, I could come up with some pretty epic stories (maybe as a precursor for a He-Man comic? think about it Mattel, I play very well with others). 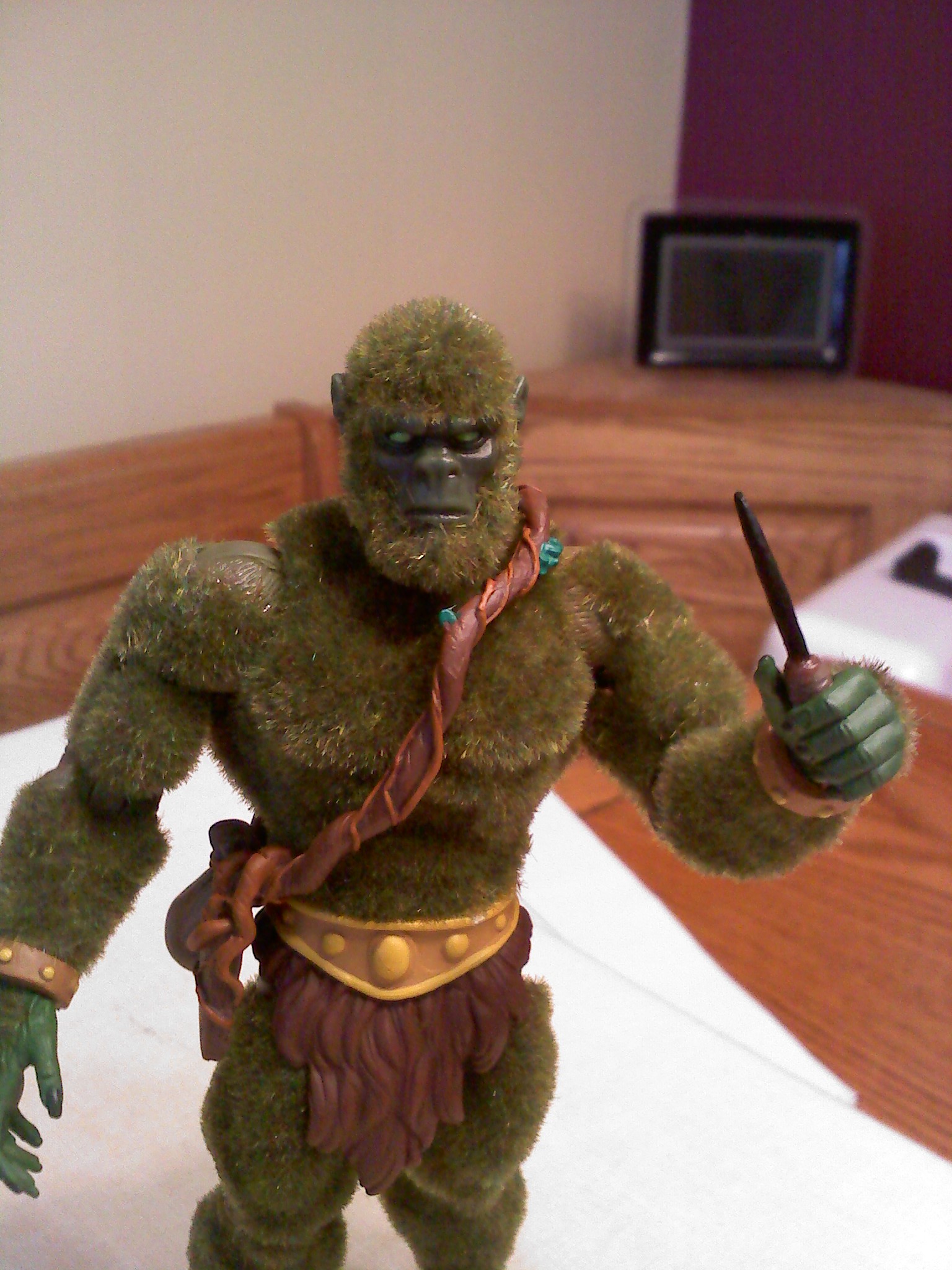 Here you can see the alternate head and knife being wielded. I like the creepiness of this head which I’m sure references something from the He-Man mythos I’m not familiar with (probably the mini comics). It’s been about 20 minutes since I cut open the package and I think the pine smell might be giving me a bit of a headache and I’m almost positive the missus will not be happy with the smell. I like that they did it, but maybe the smell could have been a little more subtle. Maybe it’s time for Moss Man to spend some time in an open window. I hope that cat doesn’t eat him.

Overall, this figure gets…how should I rate these things? Toyboxes! Okay, Moss Man gets 4.5/5 toyboxes with that half a point off for the crazy smell. Major kudos for the flocking and multiple heads, which I’m sure will please most fans (not, of course, the ones who say they love toys, but really just hate everything, there’s no pleasing those guys). I also really dig the removable knife, which looks like it could have just been part of the sack sculpt. The score might drop down if the flocking doesn’t hold. A few pieces came off while I was popping the head on and off, but seeing as how he’ll probably just sit on a shelf forever (or until my He-Man comic book gets picked up) it shouldn’t be a problem. Like all of the mattycollector.com-exclusive MOTUC figures, Mossy here sold out. If you can, I highly suggest getting a subscription if you can spare the cash. It’s the way to go and even if you get a figure you don’t want, I’m sure you wouldn’t have a problem unloading it on eBay or some other toy swap site.

So, this weekend was a little weird, mostly for all of the weird Tarantino-ness that sneaked its way into things. The wife and I headed up north to New Hampshire to visit her folks for Father’s Day. On Saturday we went to this flea market where I picked up Evil-Lynn from the 2002 Masters of the Universe line along with NECA’s The Bride figure from Kill Bill.

Later on, we went to this place called Building 19 where I picked up three books (for $2.98 each). One was the script to Pulp Fiction which I ended up reading for the rest of the day (it reads just as well as it watches), Spike, Mike Reloaded by John Pierson (a book I’ve heard about on plenty of Kevin Smith DVD commentaries) and Sonata For Jukebox by Geoffrey O’Brien, a book that caught my eye like just about any other book with a record on the cover does.

Finally, my Quentin Tarantino weekend ended with a viewing of Incredible Hulk (hey, Tim Roth was in it, he was also in Pulp Fiction and Reservoir Dogs, close enough right?). I wasn’t all that excited about this flick at first, partly because I was one of the few people that liked the original Hulk movie. It’s been a while since I watched it, so there will be a Hulk review up later this week (hopefully). Anyway, I just wasn’t feeling IH. Ed Norton just didn’t feel like Bruce Banner. The Hulk and Abomination CGI looked fine, but the helicopters looked ridiculously fake.

Frankly, the best part of the flick was Roth. He’s super-crazy and the scene where he fights the Hulk as himself (before Abomination-ing out) made me psyched for the Captain America movie. The only problem? Wouldn’t it have been cool to see Roth play Union Jack down the line? Oh well, too late for that now probably.

On a different note, Em and I were talking with the in laws about the upcoming movies and we all suggested that Matt Damon would make a great Captain America. This got me thinking that if it is Brad Pitt, as some of us around the office have thought about, Damon could make a great Hawkeye down the road. Let’s just not wait too long on this, okay Marvel? Thanks.

Um…I guess I ran out of Tarantino stuff, but you get the idea.