My folks came in for a visit this weekend and after watching a few of Lu’s favorite movies, my dad put on Pixar’s The Incredibles. After the difficulty I’ve had showing my daughter Wall-E and Cars, I thought this might be a lost cause, but she was into it, so we wound up watching the whole, nearly two hour movie. I’d seen this flick maybe once before when it came out in 2004 and have fond memories of playing the video game with my wife when we were newlyweds, but aside from that, only remembered the basics: after being retired by the government, a superhero comes out of retirement to face an evil guy on an island. He can’t handle it on his own, so his superpowered wife and kids come to help save the day.

The first thing to hit me while watching this movie is how freaking dark it is. The script gets into some really heavy areas like Mr. Incredible getting sued by a guy he saved who was trying to commit suicide. The deaths of dozens of other heroes at the hands of the movie’s villain as a way of testing his killer robot also get mentioned several times. These deaths or near-deaths might not hit as hard as Nemo’s mom in Finding Nemo or Carl’s wife in Up, but there are a heckuva lot more of them.

There’s also Elastigirl/Helen’s fear that her husband Mr. Incredible/Bob is cheating on her, something their kids, at least older daughter Violet, pick up on. As it turns out, Bob’s been playing hero for what he thinks is a super secret branch of the government trying to build some kind of powerful attack robot, but there’s definitely some romantic tension between him and go-between Mirage. Anyway, as it turns out, Mr. Incredible’s actually just one of a number of heroes brought in by the villain Syndrome to test his killer robots against. Each hero either defeats the robot, offering more data to build a better one, or gets killed in the process. When he’s got it right where he wants it, Syndrome wants to release it on a big city and then swoop in to save it, using a remote to shut it down and look like a hero.

All in all it’s a well put together film with strong family ties and various characters offering emotional relationships to form with the audience. You might not be the middle aged person wanting to relive the glory days, but maybe you’re the repressed youngster who wants to let lose or the teenager who wants to figure out the world or the one trying to hold the family together. Add in healthy doses of superhero fun — from the look at Edna’s costume-testing system to seeing each Incredible use their powers — and there’s a lot to love about this movie. As a long time James Bond fan, I also appreciated the many Bond villain nods that came from seeing Syndrome’s various villainous lairs.

And yet, I don’t know if I love The Incredibles. After watching with my wife and parents, they were totally into it and I was the one voice of dissent, noting the similarities to existing comic book teams, characters and stories. It was a silly discussion to kick off with non-comic fans because I couldn’t possibly make them understand where I’m coming from without laying down lots of evidence that they probably wouldn’t care about anyway. The best I could do was saying to my dad, “What would you think if another band put together a great pop record that actually borrowed a lot of hooks from The Beatles.” It’s not the best analogy and I’m probably confusing terminology, but it works to an extent.

The main problem I have with the film comes from the power sets and how they relate to the Fantastic Four. Sure, Mr. Incredible isn’t rocky, but otherwise he’s The Thing. They also swapped out Human Torch for the Flash, but the main aspect that bothers me comes with Violet’s powers. Sure, it makes sense that the shy teenager can turn invisible, but why does she also have force field powers? Those aren’t organically linked abilities, but were put together for the character Sue Storm by Stan Lee and Jack Kirby. It’s not like having super speed and the ability to vibrate through things because you can shake your molecules. Those both come from the ability to move quickly. Invisibility and force field projection aren’t related making Violet’s powers a direct lift from Invisible Woman/Girl.

To a lesser extent, you’ve also got elements of Watchmen in there as well with the government outlawing superheroes, a theme that had been played with throughout comic book history. I guess what bums me out about The Incredibles is that it could have been more original. Writer/director Brad Bird could have done a lot more to make a completely new story, but by compounding various elements that comic book fans are already familiar with, it kind of bogs things down. Sure, I’d compare any original superhero fiction to my internal library of comic knowledge, but this one hit off so many notes from things I’ve read and seen before that it can somehow overshadow the general feeling of fun that came from the film.

At the moment, I’m feeling more positive about the movie. Seeing Mrs. Incredible use her stretch-y powers on screen was a real treat, the kind of thing I haven’t seen so much done with since the old school Plastic Man cartoon. I also really enjoyed how the Incredibles used their powers together. There’s a more seamless nature to the way husband and wife play off of one another’s abilities — which not only refers to their past as heroes, but also the bonds that form through marriage — while the kids need a little more coaching as they learn how to use their own abilities to stay alive. Combining powers has always been a favorite aspect of team comic books for me, so I enjoyed scenes where Mrs. Incredible turned into a boat and Dash kicked them towards shore at super speed or Violet made a ball and Dash ran them around hamster-style.

If I could just forget about all the comics I’ve read, I’d be fully in love with The Incredibles. Since that’s not happening without a head injury at this point, I guess I’ll remain on the fence with this one.

So, yeah, I sometimes watch Project Runway with the missus. I’m not too embarrassed to admit it (okay a little). However I’m not embarrassed to say that watching that show has turned me into a pretty big fan of Tom & Lorenzo over at their blog. They spend a lot of time talking about TV and fashion, half of which I understand, the other half I don’t. Turns out one of them–can’t remember which–is a big comic fan, so I’m a little surprised that they didn’t call out the fact that last season’s Project Runway winner Seth Aaron seems to have borrowed pretty heavily from Watchmen when designing this piece in their post covering his recently fashion show. 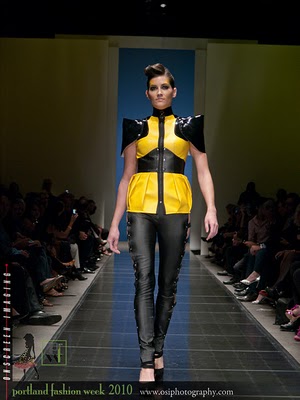 It’s not just the colors, but this immediately made me think of Silk Spectre, not so much the comic version, but definitely the movie version. King of a combination of the current and classic looks.

Monday marked the beginning of the 24th annual CustomCon over on TheFwoosh. It’s basically a virtual Toy Fair in which toy customizers offer up their creations as if they’re pitching brand new lines to real buyers. For more info, check out the site. Today is day three (I’m not exactly sure how long it goes, but I’m guessing a week). I just went through them and while I really dug all the pieces that people put up there, I did have some favorites. Huge props to everyone who contributed, I’ve got nothing but respect for anyone who takes the initiative to actually make the toys they want instead of sitting around and bitching about what they don’t have. Hit the jump to check out the full list of figures that include zombie MiniMates, really detailed Mike Tyson’s Punch Out and Immortal Iron Fist and the Immortal Weapons figures. You’ll be glad you did. END_OF_DOCUMENT_TOKEN_TO_BE_REPLACED

Like every other comic fan (and apparently a lot of normal people, considering how many copies have sold on Amazon) I started re-reading Watchmen after watching the trailer. I wasn’t a huge fan of Watchmen when I first read it back in grade school or high school (can’t remember which). I do remember buying it at a Barnes and Noble after continuously reading about how awesome it was in Wizard. I think I basically didn’t get it back then. I’ve read it a few more times and enjoy it more and more with each read, especially after reading some more of Moore’s work. I’m only four issues in, but damn, this is an enjoyable read.

Back in college, I made a deal with Em where I’d read the first Harry Potter book if she read a trade. I made the mistake of giving her Watchmen. The problem with giving someone with limited comic book experience Watchmen is that it’s just so damn dense that it’s hard to get through. I’ve also discovered by giving non comic book fans different books, that there is a mechanic to reading comics that fans take for granted that new readers don’t necessarily know. The most difficult thing tends to be which order to read the word balloons in (something I still have trouble with). It seems like it should be something uniform like top left, then below that and over or everything in the top row and then the bottom (like a typewriter). I’m definitely off on a tangent here, but I’m curious to see what people who bought the new edition based on the coolness of the trailer think and whether they’ll move on to other Alan Moore comics or other trades in general.

Speaking of Alan Moore movies and trades, Em and I watched League of Extraordinary Gentlemen tonight (a.k.a. LXG, hehe). I actually like this flick. It’s very obviously a huge departure from the first LOEG volume (one of my all time favorite comics, I even wrote a 17 page paper on it in college) but it does have some fun elements. Also fun was trying to explain how much I liked the comic book and how different the movie is and also how much I like the movie. She just started laughing at me and said I sounded like her trying to convince me to watch a chick flick.

In the end she enjoyed (didn’t love) the movie, which is pretty much how I feel. Now I’ve just got to try and get her to read the trade. She’s also looking to re-read Watchmen along with me, maybe I’ll get her thoughts on the book after we’re done.