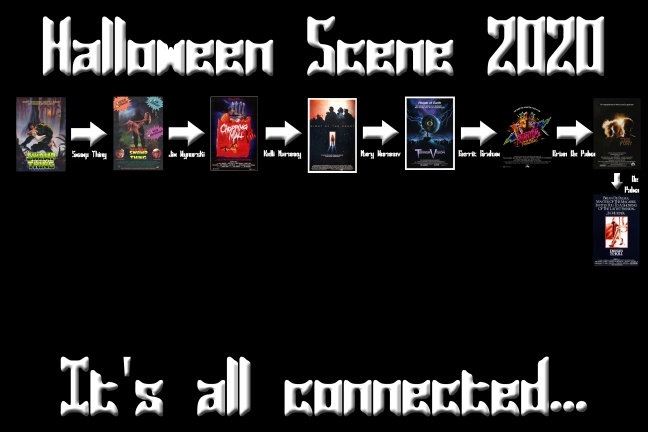 Once I decided to dive into Brian De Palma’s films as part of It’s All Connected 2020, I had to figure out which ones leaned towards horror and which of those happened to be streaming right now. That got me to 1980’s Dressed To Kill which is currently on Amazon Prime. Now, compared to Phantom Of The Paradise, Carrie and The Fury, this film might just barely qualify as horror (most would probably go with the “thriller” label), but it certainly got me thinking, so here goes!

END_OF_DOCUMENT_TOKEN_TO_BE_REPLACED

I was pretty excited when I realized that my previous It’s All Connected 2020 selection, Phantom Of The Paradise,  was directed by Brian De Palma. As I mentioned in that post, I’ve seen a few of his movies, but none of his horror pictures, aside from Carrie. As it happened, I was able to find many of his films from the 70s and 80s streaming, so I went through parts of his filmography in chronological order for a bit, moving into 1978’s The Fury after Paradise.

END_OF_DOCUMENT_TOKEN_TO_BE_REPLACED

Blerg. I’m starting to understand why slasher movies got such a bad rap in the 80s. I knew nothing about Funhouse going in, not even that it was directed by Tobe Hooper, which I learned in the opening credits. I really only rented it because the title sounded cool. I still automatically think of Texas Chainsaw Massacre when I see his name, so I got a little more intrigued, and wondered how he’s scary-up a carnival (which are already pretty scary considering they’re filled with carnies). But the truth is that there isn’t much to be scared of in Funhouse.

There’s a lot of weirdness going on with this movie and I’m not talking about the carnival folk. You start off with a Psycho homage in the beginning with a girl who looks way too young to be topless in a movie, topless in a movie. We’ve all seen Psycho and our fair share of homages, so this was a pretty obvious fake. what was weird about it was the fact that it was a younger brother fake-stabbing his old sister in the shower. That’s weird right? I don’t have an older sister, but that seems like crossing a line into grossness, even for an adolescent horror fan. This starts a subplot that seems completely pointless as our final girl’s little brother follows her to the carnival, gets scared, gets found and then a nice carnie calls his parents to pick him up. It has nothing to do with the main story and doesn’t cross over into what’s going on with his sister and her friends. It’s a little disappointing because I like the idea of a kid alone against a threat, but like I said it goes nowhere. For more, hit the jump.

Which leads us to our final girl and her friends. I think she knows the blonde girl, her Rick Moranis-looking boyfriend and the final girl’s date for the night Buzz. The two girls don’t have much personality, Rick is a stoner douche and Buzz is a pretty nice guy. All in all, they’re boring. And usually that’s not a bad thing because the killings start pretty quickly and we’re off in running. This time, it’s slow going. Really freaking slow. They hang out in the carnival. Look at weird animals and a baby in the jar (do they ever say that’s the big weird monster’s brother? I assumed it was). Then they decide to spend the night by jumping off inside the funhouse.

At this point the movie finally gets started. The kids witness some craziness involving a bruiser wearing a Frankenstein masks (he turns out to be the gross thing on the poster), we find out that he has a history of killing people and the movie turns into your basic “we have to protect our family” plot you’ve seen dozens of times. Even then, it’s still very slow. That’s what happens when you’ve got four potential victims (five if you count the kid, but like I said, he’s hardly in danger).

I also take issue with how freaking enormous the actual funhouse is. Not only is one level high enough to drop a rope around his neck and pull him up so high that the others couldn’t even reach his feet, but there’s also enough below it for a trap door to open and seriously injure someone and the final battle ground which shows all the gears and moving parts underneath the funhouse (which also seems to have 8-10 foot ceilings. I’m also not sure how they’re looking down on events happening. Structurally it’s confusing. Are they up a floor somehow? I kept asking myself these questions and, not being able to nail it down, kept getting distracted. Stories have to make sense, even on an architectural level!

If you’re looking for a rad carnival movie, check out Freaks, Ghoulies 2 and the HBO series Carnivale, as Funhouse doesn’t really take advantage of the setting, in fact, we only see two evil carnies. Where are all the other ones while all this craziness is going on in the funhouse? Blah. Next!