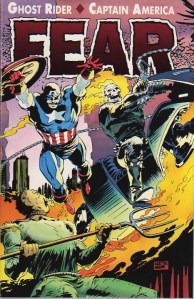 I haven’t talked about it much on the blog here, but I’m a huge fan of Ed Brubaker’s run on Captain America. I think it’s one of those runs that people will (and some already do) look back on with the same awe as Frank Miller’s Daredevil or Chris Claremont and John Byrne’s X-Men (but, unlike those runs, I actually like reading this one). Outside of Brubaker’s Cap and his appearances in the Avengers, I don’t have a lot of experience with the Sentinel of Liberty so I’m always look for new trades read. And, after just reading those first five issues of the 90s Ghost Rider, I’m now also looking for Ghost Rider books. So, when I saw a book on Sequential Swap called Ghost Rider/Captain America FEAR, I was sold. Well, as it turned out, it’s not really a trade, it’s a 48-page prestige format book with a fold-out cover (I wish Swap was a little more discerning in what they consider trades, but I also should have done a little research). When I opened the package, I thought it was actually a bonus comic thrown in for good measure along with Walking Dead Vol. 10 until I went back and realized I swapped for it. No big deal, just a cautionary tale to do your research.

Anyway, I had a good time reading this book. The story, written by Howard Mackie and drawn by Lee Weeks, teams Ghost Rider and Captain America up against an enhanced Scarecrow. The one and only interaction I’ve had with Marvel’s Scarecrow is an appearance in DC Vs. Marvel when he appeared with the real Scarecrow, so I don’t know what he was like before, but after a series of surgeries he now has enhanced strength and he makes anyone within 20 feet of him feel scared. It’s a hormone thing. Oh, he also talks about his mommy a lot.

The story is pretty much a Ghost Rider one with Cap thrown in to make Ghost Rider feel like a hero and track down Scarecrow who’s obsessed with him. You’ve probably seen the moment before when a young/new hero talks to Cap, Cap says he’s doing a good job and they feel honored or vindicated. Well, Danny Ketch here has been Ghost Rider for roughly 25 issues (according to an editor’s note, I miss those things) and he’s feeling like everyone hates and is afraid of his alter ego (it’s probably the flaming skull), but Cap doesn’t judge him harshly. Cap says he’s doing a good job by only going after bad guys and that being a hero isn’t easy. Then they pretty easily go after Scarecrow and fight him and win.

I will admit, I’m still not clear on all of Ghost Riders abilities or how they work. I get that his bike can fly/jump/ride up walls, he’s strong and pretty much every part of his jacket can be used as a weapon, but what I don’t get is the Penance Stare. There’s a moment where he tries to give Scarecrow the Stare but he can’t because Scarecrow’s brain is so screwed up. Shouldn’t Hell trump craziness? I dunno, maybe it’s explained somewhere.

It might sound like this is just a stretched-out single issue, but Mackie handles the 48 pages really well without much drag. It’s like one of those rare annuals that is actually enjoyable and well-paced (I know you’ve got one or two in mind). And even though this is a Ghost Rider story mainly, it reminds me of how much fun Marvel’s NYC must have been in the 90s. Both Captain America and Ghost Rider were hanging out, fighting bad guys and occasionally crossing paths. I would hope that the Ghost Rider issues after this helped Danny get a little bit more comfortable in his vengeance-seeking skin and that the weird Scarecrow ending came back somewhere. I probably won’t be keeping this book in my collection but hope that when every comic book ever finally gets collected, this is included in it’s correct chronological order with the rest of the Ghost Rider books. Those I would keep.