It was bound to happen. It’s not like I could have 100% luck liking these comics I picked at random and let me tell you, these four issues of Warlock And The Infinity Watch from 1993 and 1994 written by Jim Starlin and drawn by Tom Grindberg (21, 23, 24) and Angel Medina (22) are just bad. It doesn’t help that 21 and 22 are Infinity Crusade tie-ins while 23 and 24 are part of the four title, 13 issue Blood and Thunder Thor crossover and I have very little working knowledge of Warlock and his team aside from what I’ve read in the current Guardians of the Galaxy and Infinity Gauntlet. Oh, also, I hate Grindberg’s art. He’s like a less anatomically correct and more sloppy Mike Mignola. And I love Mignola, which got me thinking about how fine the line between art I like and art I don’t is. I wasn’t going to even bother scanning one of the pages, but since these covers don’t seem to be online anywhere and I was scanning anyway, I figured “what the hell.” You can see the last two covers with your own eyes. I have no idea how the inker and colorist figured out what belonged to which character.

But enough about that. I like Jim Starlin space comics and these were not good Jim Starlin space comics. They don’t even approach something like Infinity Gauntlet or Dreadstar (a book I highly recommend checking out). It did go a little away from his usual “space government fighting against space church” thing he seems to go to a lot, but I really had no idea what was going on in these issues. Again, it’s hard to really judge a series of comics that have no running story between them, zero character development (Drax fights Thor…a lot), very little team interaction and absolutely no room for newbies like myself to gain a foothold. Blech. Maybe they’re better in the context of their related stories, but as of now, I’m not putting the effort in. Hopefully the other WATIW comics in the box are a lot better because there are quite a few of them (their numbers come in second to the nearly complete run of Power Man and Iron Fist I keep hoping I don’t pull for this column (did you like the new logo?). 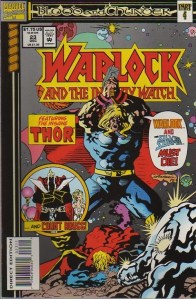