I am a gigantic Rich Koslowski fan. I first discovered his work as a youngin at the Mid Ohio Con back when it was still at the Adam’s Mark hotel, before they moved it to the always awkward Hilton (rich folks staring at comic fans like animals at the zoo is always a good ego boost). Back in the day I would try and buy at least one thing from some random dude in artists alley. Previous cons introduced me to great books like Lethargic Lad and Him. Anyway, I was walking around and this dude grabbed my attention and the next thing I know, I’m buying a package of comics called 3 Geeks and a tape recording of the next issue. I instantly fell in love with these three weirdo comic fans and could immediately relate to their tales of comic con troubles (I actually read that arc on the car ride home). From there I started buying 3 Geeks whenever I could and then later Geeksville when it moved to Image. I also borrowed Rickey’s copy of The King and really dug it, so when I saw this Christmas-themed book by him on the old Wizard free table I jumped at the chance to pick it up. However it took me a while to actually get around to reading it. I was looking at my bookshelf yesterday and saw The List sitting there, waiting to be read and figured it would be a great time to check it out for a Christmas Stories entry. I didn’t expect to read the whole thing in one night, but that’s just a testament to how good it is. As a quick side note, I was actually going o pass this book to my younger cousin a few times thinking it would be a good thing for him to check out and boy I couldn’t have been more wrong. Thank goodness I didn’t. 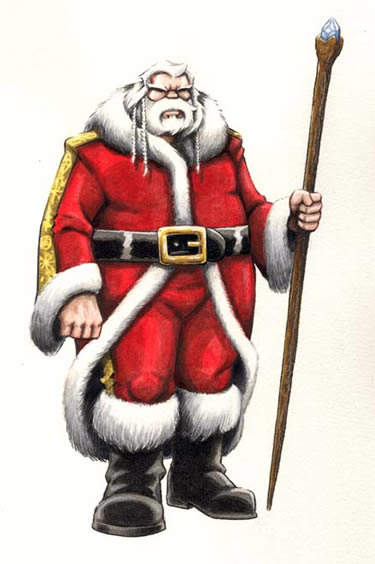 So, what’s The List about? A huge company called Halcyon wants to get Santa’s naughty and nice list, so almost 40 years ago they launched an attack to capture Santa and then take over his castle on the North Pole. Now a small group of Santa sympathizers have freed him and he’s ready to take his house back with the help of his reindeer, elves, Abominable Snowman and a group of others who most fans of Christmas specials will find very familiar.

I LOVED this book. I am a big fan of stories that take a familiar mythos and play with it. In this case, Koslowski not only takes myths about Santa and uses them in his story, but he also takes familiar characters from the Rankin/Bass stable of characters like Rudolph (Rendor The Red-Rider), Clarice (Klaaretteta), Hermie (Norbie), Frosty The Snowman (IceCap) and Yukon Cornelius (Klondike Saskatchewan) and spins an action/sci-fi/fantasy story that truly feels epic. Koslowski bounces back and forth between the present and the past to tell a story that kept me flipping the pages for two hours straight. He keeps the story short and sweet and the action tight, moving things along at a hell of a clip. Also, his occasional illustrations like this badass Santa are all incredibly solid. I’d actually love to see this book turned into a full on comic and/or an animated feature in Koslowski’s style.

So, there you have it, the first and probably only book review I’ll be doing for Christmas Stories as I’m usually a very slow reader, but I’m glad this was the one I read. I’m also glad that I didn’t pass this to my young cousin as it involves more death than I expected, but that’s on me because there’s clearly blood drops on the cover. Do yourself a favor and rustle up a copy of The List and read as much Rich Koslowski as you can find. Also check out his site, where I grabbed these two pics from.

2 thoughts on “Christmas Stories: The List by Rich Koslowski (2007)”