As you hopefully saw, a few days back I ran down 8 great customs I saw over on Fwoosh’s CustomCon 24. Well, being the inquisitive fellow that I am, I decided to go back through the previous 23 CustomCons in the archives, which kept me busy for a lot longer than I’m comfortable admitting. It’s been funny because the first one was in 1999, which means that you got a lot of Super Powers, Marvel Super Heroes, X-Men, Spider-Man, Batman: The Animated Series and Total Justice customs. It’s crazy to think how far action figures have come in 10 years. Now we’ve got much better figures in the form of Marvel Legends, DC Universe Classics, DC Direct’s latter day out put and the 3 3/4-inch offerings from Hasbro (Marvel Universe and G.I. Joe). So, after slogging through tons and tons of custom toys, seeing a seemingly infinite number of variations on the Batman/Superman/JLU animated style and a surprising number of Count Nefaria customs, I wanted to call out some great pieces I’ve come across.

First up, you’ve got these Starman customs from CustomCon 2 (Spring 2000). You can’t really see how good these figures are from this picture, so definitely click through and check out the much better close-ups. Starman being one of my top 5 comic lines of all time, it’s been annoying not having any real figures to collect aside from the just-okay Jack Knight with light-up staff DC Direct made a while back. I’d love to get my hands on a line like this.

CustomCon 7 (Fall 2002) brought us these fantastic Top 10 figures by 2D Toys. I’m really impressed with how well the sculptors were able to not only capture Dust Devil, Smax, Girl One, Jackie Phantom, Synasthaesia and Jack Peacock as characters, but also Gene Ha’s inimitable art style. Just check out this Smax and then hit the link for all the figures.

Spring of 2005 brought about the 12th CustomCon and with it came the best DC/Marvel Amalgam I saw in my journey through custom toy time by Lars. Dubbed Marvel Legends Amalgam, this line would have given us Spider-Boy (Spider-Man/Superboy), Dr. Strangefate (Doctors Strange & Fate), Dark Claw (Batman/Wolverine), Thorion Of The New Gods (Thor/Orion), Iron Lantern (Iron Man/Green Lantern) and Man Of War (Superman/Captain America). I loved Amalgam when it came out and would have loved some figures like these. 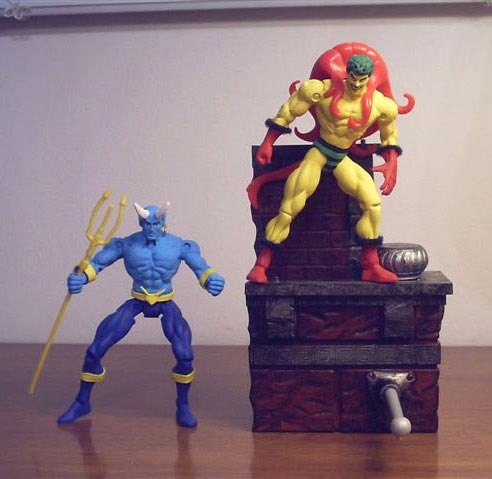 Over the many pages, I was more and more impressed with the faux lines that either mashed-up two different properties or took a property and put a spin on it. Last Spring’s CustomCon 19, did the former by combining Batman and Star Wars, leading to Bounty Hunter Batman and Sith Lord Joker by JB Designs. Super rad!

Sillof did a lot of the latter, where he would take various comic teams and put them in other historical contexts. My personal favorite of all of his takes on heroics are these Victorian Avengers from CC22 (Spring 2009). I think you’ll get the idea from the pic of who made the team. The designs are probably cooler than those in 1602.

And finally, I closed out my tour of CustomCons past seeing a group of figures I had actually seen pics of earlier this year in the form of these Guardians Of The Galaxy customs by Joel Rigueur Jr. for the previous CC. It’s not quite up to date with the current team, but these are rad figures of Star-Lord, Rocket Raccoon and the gang.

With CustomCon 24 finally wrapped up this weekend, look for my wrap-up post some time tomorrow!

One thought on “Toys From CustomCons Past”