ZOT!: THE COMPLETE BLACK & WHITE COLLECTION 1987-1991 (Harper/Eclipse Comics originally)
Written and drawn by Scott McCloud
Collects Zot! #11-18, 21-36
A few months back I did a post about listening to Man Or Astroman while reading Zot! Zot’s the comic that Scott McCloud did back before he decided to explain comic books to the world. Zot comes from an alternate Earth where everything’s pretty perfect. He’s a hero who can fly and uses gadgets that his uncle Max creates to stop what little crime there is (which is usually committed by supervillains instead of regular people). At some point Max discovers “our” Earth and comes over. Zot meets a girl named Jen and they’re kind of dating. Her and her friends go back and forth between their Earth and Zot’s, though, when Zot is on our Earth, he pushes the line and gets into a lot of trouble when he tries to play the superhero. This 576 page book collects only the black and white material that McCloud did, which explains the holes. The first 10 issues were all in color and, according to McCloud, way more simple and superhero-y. The two issue gap of #19 and 20 were when drawn by Chuck Austen while McCloud and his wife Ivy got married. There are thumbnails of those issues in the collection, but not the actual reprints.

I was lucky enough to be given this book back when I was working at Wizard. It sat around for a while. Heck, 576 pages of anything is intimidating. And I did end up taking about a month long break in the middle of reading that actually fit pretty well in the flow of the series, but I really really enjoyed this comic. I’m sure like many of you, you’ve read the “superhero in the real world” concept over and over and over again. But, instead of taking a negative view of the idea, McCloud zooms way in and explores the relationship a young girl has with said superhero and how that hero deals with the challenges he can’t zap with a gun. The first part of the book focuses mostly on Zot’s adventures against enemies like Zybox the world-absorbing robot, 9-Jack-9 the cyber assassin and Dekko the…killer building? Like I said, it’s a long book and I’ve forgotten big chunks of it, but the “standard” hero vs. villain issues are really solid. I only use the word standard in the sense that it’s what you expect from a superhero comic, not that it’s common by any means. The second part, has Zot stuck on our Earth and focuses more on how he interacts with real, human evil and how the supporting characters deal with everyday life, or at least their really shitty lives. I’d like to say that these are my favorite issues, but really, I don’t think there’s a single one I disliked. The arcs are solid all around and, I recommend this book for anyone interested in branching out into more indie-oriented comics while still sticking with superheroes. Also, I’m a big fan of how the book itself is put together. Not only does McCloud do a nice, informative intro that explains the book much better than I did, but he also talks about every single arc after you’re done reading. I love that behind-the scenes approach to extra features. It’s also funny to read how hard on himself he is as an artist, especially because some of his pages blew me away. 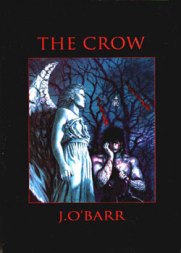 THE CROW (Kitchen Sink Press)
Written and drawn by James O’Barr
Collects 1-5?
Like every other 11 year old in 1994, I saw and loved The Crow, though I’m pretty sure I saw it a few years later. Anyway, with all the mystery thanks to the Brandon Lee’s tragic death and the overall radness of the movie, it was sure to be an instant classic with dudes. I think I knew when it came out that it was based on a comic. If not, I did soon enough, but I never read it until this weekend. I got the book in a swap thanks to the wonderful and highly recommended Sequential Swap TPB trading site.

I liked the book, though it wasn’t all that spectacular. Frankly, I think the screenwriters and director took an alright comic and made it a kick ass movie. I kept reading and getting close to parts I remembered like Eric killing the pawn shop owner or him confronting the little girl’s mother and getting pretty excited only to be let down by standard fare. In the movie, Eric fills a shotgun full of rings and blasts the owner away and he squeezes the drugs out of the mothers arm, in the comic it’s just a simple gunshot and chiding.

So, while, action-wise the movie doesn’t offer up much of interest, it does capture an emotional sense that I didn’t expect to feel. O’Barr really does seem to capture the pain and rage of losing someone you love intensely. In fact, I’d say that’s the real strong suit of the story, especially considering the idea of the Crow and resurrection isn’t really explained in the book (unless it was in one of the transcriptions of friggin’ Joy Division lyrics I skipped over, hey, writers, please stop quoting the damn songs you like in your works unless it actually matters!). Anyway, I’m not sure if the book would make much sense if you hadn’t seen the movie, at least on a larger scale than the basic revenge story (I wonder if that sentence has ever been written before).

So, anyone else read Zot or The Crow and have any thoughts? I’d like to hear them. Are the other Crow books worth reading?