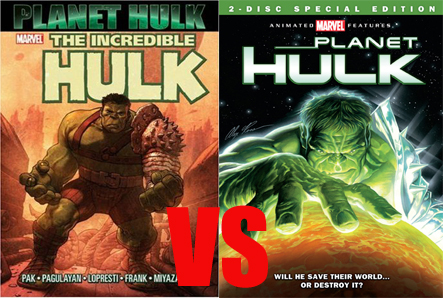 I’ve been looking forward to the Planet Hulk dvd for quite a while. I first posted the Alex Ross DVD cover back in October, then I did interviews with some of the people behind the movie for Marvel.com and even mentioned how hopeful I was for it in a list over at Topless Robot. Plus, the comic is one of my all time favorite Marvel runs of all time, so, needless to say, I was really hoping the dvd feature wouldn’t disappoint me. And thankfully it didn’t.

What I liked about the comics is that the story by Greg Pak took a character who generally seemed to be a plot device and turned him into an actual down-to-Sakaar character who you were rooting for. There was an epic nature to that tale, taking the Hulk from stranded and betrayed to revered royalty. I didn’t like World War Hulk because, let’s face it, the premise itself just wasn’t going to happen in the regular Marvel universe. Hulk was never going to come to Earth and kill the guys who sent him there. I know that ended up not being the point of the story anyway, but that was the bill of goods we were sold heading in the project. Anyway, as a collection, the hardcover is one of my favorite because it includes so many extras and just looks damn nice on a shelf.

So, what about the movie? I think they did a helluva job interpreting it for the small screen. Sure, it could have been longer and covered the entire run of the book, but I like where it left off, even if I wasn’t expecting it to end so soon. Consider this potential SPOILER territory if you haven’t seen it. The movie covers the first 2/3 of the comic basically, with Hulk and the Warbound overthrowing the Red King and Hulk becoming the new king. So, you don’t get the spaceship blowing up and a vengeful Hulk ready to smash the Earth, instead it ends on a happy note with Hulk and his lady celebrating. It was kind of a nice change. Plus, it leaves plenty of room for a sequel that can go right into World War Hulk if they think that will work.

And, while many of the story points were compressed and combined, I didn’t feel like anything huge was left out. There were some changes seemingly made based on the rights to certain characters. For instance, the Warbound does not include a Brood, presumably because she’s part of the X-Men license which isn’t held by Marvel Studios presumably. The same goes for the lack of Silver Surfer who showed up in the comics to fight Hulk and company. This time it’s Beta Ray Bill who first pops up in Korg’s Thor-based flashback and then fights Hulk. I’m guessing this is the same thing, considering Fantastic Four characters fall outside of Marvel Studios’ purview currently. It was a change I liked, I mean, how can you not like seeing ol’ Horseface fighting Hulk? 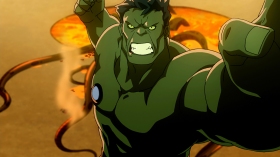 Which brings me to the fight scenes. Man are they cool. I don’t think I’ll ever get sick of Hulk throwing down with robots, pink zombies or dudes in armor. Those were the best parts of the Incredible Hulk movie, which I really didn’t like, but luckily, the story here is a lot tighter and makes more sense. The pace is rapid, but not without character moments and all around a great piece of work by everyone involved. Two thumbs way up.

EDIT: In a conversation with my buddy Ben, I was reminded that Marvel Studios does the Wolverine and the X-Men cartoon, so they obviously do have the rights to do Brood. Maybe they didn’t because they’re gross.