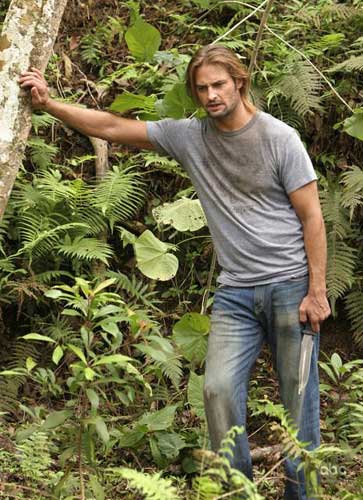 Like with alternate universe Locke, Ben and Arzt, I would love to watch a spin-off starring detective Sawyer (well, Ford, I guess) and Miles. I’m getting a Nash Bridges vibe from it.

It’s cool seeing the bad guy team coming together. Crazy Claire, Killer Sayid, Non Locke, injured Jin, the stewardess and kids and kinda Kate. As Em pointed out, Kate is like when Shaun and company try to pose as zombies in Shaun of the Dead. Made me laugh when she said it, but it seems to fit as we don’t really know where she stands (though I’m guessing she’s just trying not to die).

I called that Charlotte would be Sawyer’s date, but only because I saw her in the credits while working on my Maxim TV column, which doesn’t contain Lost because I’m trying not to put it in every single week (even though I want to). I wonder if we’ll see more of her in the flashsidewayses.

I couldn’t tell if Zoe was actually Jodie Lyn O’Keefe from the beginning (she looked different, right?), but IMDb tells me the Tina Fey lookalike’s name is actually Sheila Kelley. Definitely knew that Zoe wasn’t who she said she was, but didn’t make the connection that she’d be with Widmore and company.

Widmore’s completely right, we really don’t know anything about him or his motives. We know he’s a protective father who doesn’t think Desmond is good enough (can’t say I blame him), but aside from that, we just know what Ben, a known liar, has told as. And considering how seemingly misinformed Ben has been (killing the man he supposedly served), we shouldn’t take what he says as gospel. Definitely wish Sawyer would have pressed the issue of what’s actually going on a bit more. As Em pointed out, Hurley would have been all over the questions.

Crazy Claire tried to kill Kate while Sayid just watched and I didn’t care one bit. I’m not sure what purpose Kate serves aside from screwing things up and chasing after people who don’t want to be followed.

So, Non Locke had a crazy mother (I’m guessing based on some myth) just like Aaron now has. Remember how it was said that Aaron could either be an important or dangerous being? I wonder if he’s the next Non Locke.

In Dimension X, Sawyer’s family was still conned, presumably by Locke’s dad. So, I’m guessing that, like I suggested in my Lost Thoughts about The Substitute, either Locke’s dad hasn’t revealed himself to be a conman or Locke’s involved somehow. I’m leaning towards the former, but not counting out the latter.

I just realized that Non Locke obviously knew that Widmore was over on Hydra Island or that his people were there. Remember last episode when he told Ben to go there? Seems like Non Locke wanted Ben to run into Widmore and get his ass killed. But, if Non Locke was over there and killed the other passengers, why didn’t he kill the Widmore folks? OR did he and then Widmore and company showed up in the sub?

Em’s got me worried about who Juliette will shoot back when they were hopping through time after the Ajira plane landed and they were in a canoe race. I hope it’s not Sawyer, that would be TOO much.

I like how Sawyer’s playing both sides, but it seems like he’s greatly underestimating how difficult it is to drive a sub. It’s a good think Lapidus is still around (hey, there’s his reason for existing).

Oh man, finally, a Richard episode next week! I wonder if it will still have a flashsideways or just flashbacks.

Okay, it’s time for big theory time. I’m starting to lean towards the theory that Jack’s plan worked and they never appeared on the island. Many of us have been watching the Dimension X storyline as “other” instead of assuming Jack’s plan worked and everything got restarted. It’s almost like we’re getting a “what happened after the end of the series” look that you never do because, well, the series ended. Of course, I’m not quite sure how to explain what’s going on on the island in what seems like the present. Is it possible that the explosion somehow set them outside of time? If so, how did Widmore get there? It’s not even close to an airtight theory obviously, but hopefully we’ll get even more information as to what the hell’s going on.

One thought on “Lost Thoughts: Recon”