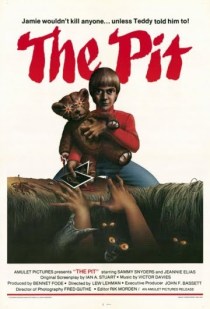 If the poster alone doesn’t make you want to watch The Pit, then I’m not sure if there’s any hope for you. This is a ridiculously weird and enjoyable little movie about a boy named Jamie who has a teddy bear who talks to him, knows about a pit in the woods with weird little monsters in them and a super hot babysitter. But that’s not all, as Jamie spies on his neighbor (the local librarian), writes on the mirror while the babysitter showers, oh, and starts leading very stupid people to their deaths in the pit. Why are they stupid, you might ask? Well, they don’t see a giant frigging hole in the middle of a clearing. Not smart.

With all that, though, I still really enjoyed the movie because it’s just so strange. The kid who plays Jamie, Sammy Snyders, isn’t really a great actor, but that kind of adds to the mix of weirdness that is so appealing to me. He’s got a strange look with that protruding nose and a strange voice that makes him sound like a whiny cartoon character, but it all works because he’s supposed to be a strange little boy.

The movie itself doesn’t make a lot of sense, not because they don’t explain what the monsters are (they do), but because it feels like there was a lot of “oh shit” storytelling. By that I mean, the movie’s going along with Jamie being creepy and talking to his bear and then they’re like “Oh shit, we need to show and explain the monsters.” Then it goes to another part of the story followed by “Oh shit, he needs to start leading people to their deaths, let’s do all those right now.” The last 15-20 are pretty crazy with a series of things happening I wasn’t expecting including the last shot of the movie which I loved. Also, I’m still not sure what, if any, connection there was supposed to be between the bear (whose head we are shown moving independently, with no one else in the room) and the monsters, though I could have easily missed it as I wasn’t paying a lot of attention early on thanks to the movie’s lopsided sound quality.

So, no, it’s not a good movie by any means, but there’s a quirky quality to it that kept me interested the whole time, which is more than I can say for something like Cabin Fever 2 which I watched earlier last night. If you like movies that are so bad they’re good or, being nicer, a little off, then please do yourself a favor and check this one out.