I’ve picked up a lot of comics over the year. Some of them fit into larger collections I’m working on while others just strike my fancy at the time. Comics Comics Comics Comics will be a look at some of the more random books I’ve picked up here and there with a few scans/pics of favorite or funny moments from the issues. The first entry will be Adventures of Superman Annual #4 from 1992. It’s written by Robert Loren Fleming and drawn by Bob McLeod and seems to be the penultimate issue in the “Eclipso: The Darkness Within” event that was running through the annuals that year.

I have next to no experience with this Eclipso storyline, but as far as I can tell, the idea is that supervillain Eclipso has been possessing superheroes and villains (which he can only do when it’s dark) including Superman. Our big bad will apparently gain the powers of those he’s possessed once the impending lunar eclipse is complete making him pretty damn powerful. 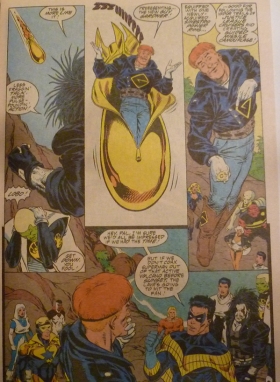 This issue is mostly concerned with members of the Justice League, L.E.G.I.O.N. and a few Teen Titans (or were they just Titans then?) tracking the possessed Superman down and trying to un-possess Big Blue. I was actually a little surprised that there wasn’t a recap page, but I was able to follow things with context clues. However, I’m not sure why so many pages were spent showing various heroes trying to find Superman even after our heroes already figured it out. Maybe they were capping off elements from previous issues, who knows? 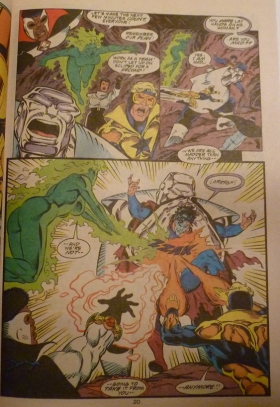 Booster Gold of all people figures out that EclipSupes is hiding out in a volcano during the day. The heroes show up only to be surprised by a newly minted Guy Gardner who recently quit the Green Lantern Corps, got his hands on a Sinestro ring and started running around in a “G” jacket, cowboy boots and jeans. I’m a big fan of Beau Smith’s run on Guy Gardner, but I’m not a fan of how Guy’s written in this issue, read: xenophobic and sexist. Guy’s not an easy character to get right, balancing the arrogance with the good heart, but Guy comes out pretty good in the end. Making him a complete ass is too easy and something a lot of writers tend to do with the character.

As the Joe Quesada/Jimmy Palmiotti cover boasted (and the reason I bought this issue) both Lobo and Guy take their turns fighting Superman and then getting smacked down by him. The plan is to explode the volcano and let the sunlight in thus curing Superman, but the volcano erupts which puts the villagers in danger. Also, it’s night, so the plan was an all-over failure. Earlier in the issue Vril Dox suggests that Guy go get some sun and bring it back, which he says no to, but then goes and does so, which winds up saving the day. With no fear for his personal safety, Guy douses Supes and then launches them both into the volcano. A no-longer-possessed Superman rises out holding Guy whose new ring apparently protects him even when he’s unconscious.

The end of the issues features a big part of Eclipso’s plan. He’s got the Will Payton Starman under his control, but made it look like Starman was being attacked by the other possessed heroes and villains. Taking the bait like super powered fish, the non-possessed heroes swoop in, save Starman and he tells them to go to the dark side of the moon, which they do. Before that, though, Superman asks Nightwing to help him find Dr. Bruce Gordon who is the Eclipso expert and used to share a body with him (or will share a body with him, like I said, I’m no Eclipso expert).

I’ve always loved the Superman/Dick Grayson dynamic, so seeing these two running around trying to solve a mystery for a few pages was very cool for me. Superman’s respect for Nightwing and Nightwing’s level of comfort with the hero everyone reveres is great. They’re checking out the labs of super geniuses like Will Magnus, Lex Luthor the Second, Emil Hamilton, Blue Beetle and more when Hawkman comes in to tell them about the moon. Nightwing goes off with him to help save the (apparently) possessed Titans and Superman gets drawn into a door of light.

Overall, I had a surprising amount of fun with this issue, it even made me want to check out a few more issues of “The Darkness Within,” at least Eclipso: The Darkness Within #2 which I believe ended the story. This issue would probably be hard for a reader unfamiliar with 90s DC comics to jump right into. Though I would start reading comics later in 1992, I still have no idea why Hawkman is wearing that red costume or what Black Canary was doing during this era (I assume she was still kicking around Green Arrow and don’t really remember her being in any of the Justice League books of the time), but if you’re at all familiar with comics, you know that random things like this change without having a lot of baring on the overall story. I’ve read Marvel books where Thor has a beard and Hulk’s wearing a tank top, but it doesn’t really effect how I read the story. I just use Wiki to find out what the deal was (I know why Thor had a beard and Hulk had a tank top, by the way, it was just an example). Putting this story into context with the upcoming Death of Superman story is interesting, especially seeing as how so many heroes–really powerful ones at that–had trouble taking Superman down. Makes Doomsday seem all the more powerful.