Sometimes a comic just calls to you. 1994’s What If… #57 was one of those comics. I saw it while flipping through long boxes this year and just had to have it. See, the idea is that, in this version of Marvel history, the Punisher became a member of S.H.I.E.L.D. which makes all kinds of sense. It helps that I’ve been a fan of Punisher for a while, love S.H.I.E.L.D. and that my favorite issue of What If… is #44 in which Venom attaches itself to Punisher and things work out surprisingly well. The thing I love about What If issues is that many of them are really asking “What if we didn’t have to worry about continuity and could really treat these characters in fun ways, what would happen then?”It’s fun to see those questions answered in the course of one single issue. Nuts to decompression!

That’s exactly what happens this time around thanks to Chuck Dixon and Mike Harris as Punisher finds himself jammed up, knocked out and presented with the option of either working for S.H.I.E.L.D. or being thrown in jail by Nick Fury himself. It should come as no surprise that Frank Castle not only loves taking on bigger criminals instead of low-level hoods on the street, but also gets into trouble with Fury for going overboard. Hey Fury, what did you expect?

Punisher’s got his own squad, each of whom wears the Punisher symbol on their berets (in my head, they’re called the Punishers or something rad like that), but after not following Fury’s dictates one more time he gets saddled with a crappy detail following Dum Dum Dugan into the jungle where a bunch of Hydra agents kill most of them (including Dugan). Punisher gets some coordinates from his old pal Microchip, makes his way to a S.H.I.E.L.D. facility, steals some gear and sets his sites on Hydra’s main headquarters: Hydra Island. 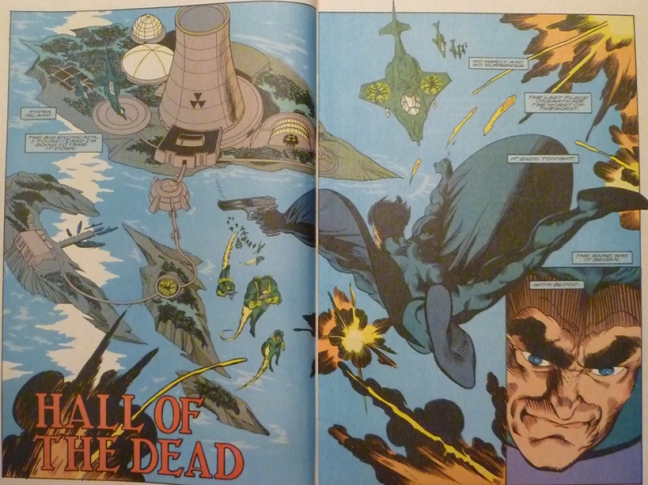 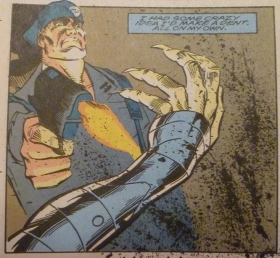 The mix of traditional S.H.I.E.L.D. elements like the glider suit and mid-air battles fit so well with the Punisher’s mentality, that I could easily find myself enthralled by a comic set in this world, though it seems that after FrankenCastle, people aren’t very interested in new takes on Punisher. I’ve always thought an alternate universe where S.H.I.E.L.D. recruits superheros as they develop and really trains them would be fun, but with more of a James Bond/Steranko vibe to it than what the similarly themed Ultimate universe turned into. Harris has kind of a Howard Chaykin style going on which is interesting, but this issue would have been a lot more fun for me personally if a more detailed artist had the gig.

The book ends SPOILER with Punisher succeeding in rigging Hydra Island to explode with him still on it and taking fire. I assume from the dialogue box on the last page that he actually dies before the bomb goes off. I’ve seen Punisher die a few times in various alternate realities, most notably Punisher: The End, but I think this is one of my favorites because it actually seems like Frank Castle’s crazy mission to punish the evil actually had some kind of real effect aside from cleaning up a few blocks of turf in Hell’s Kitchen.

I’ve read my fair share of What If issues here and there over the years including both the first and second volumes and many of the one-shots that have come out in the past few years and not all of them have been great. It’s no small task to not only set up how this universe is different than the regular 616, but to also give it some dramatic moments, good dialogue and make things fun for everyone involved.