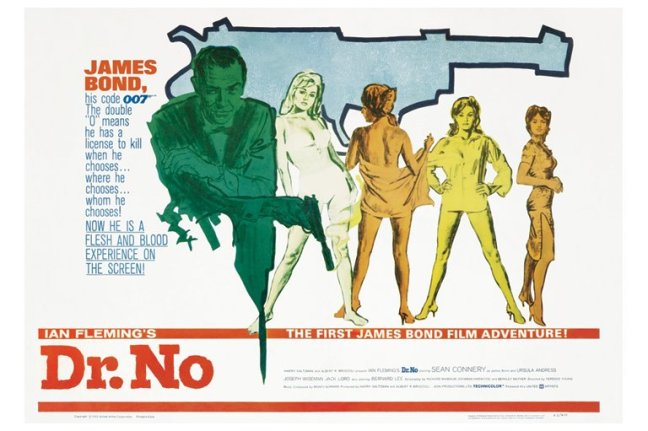 After reading the first Bond novel and watching the first filmed version of the character, I figured it would make sense to continue on with the first movie starring everyone’s favorite British super spy with 1962’s Dr. No. I know for a fact that I’ve watched this movie before, but I had very recollection of it. I wonder if that’s because I haven’t seen it in a while or because the Bond films share so many similarities that it’s hard to remember what happens in which one, especially if you’ve seen them over a span of years and all out of order. The first thing I was struck by was how much more confident and effective Sean Connery seemed as Bond compared to the secret agent introduced in Fleming’s Casino Royale. I’m not sure if it was because the movie is based on a latter day book or just the presence that Connery brought to the role, but it’s hard to imagine this version of Bond falling for Vesper Lynd’s shenanigans or even allowing Le Chiffre to get the drop on him. Speaking of the original novel, I think it’s interesting that, even though that’s not the one being adapted here there are still several elements carried over from it such as Bond’s introduction while playing baccarat to the inclusion of US secret agent Felix Leiter (played by Hawaii 5-0‘s Jack Lord!). We even see him placing hairs throughout his hotel room as a low tech way of making sure no one’s snooping around his room.

Like most of it’s latter day counterparts, Dr. No features exotic locales, beautiful women both on the side of the angels and not, a not very physically formidable main villain and an exploding headquarters at the end. Connery’s Bond is cool, cold and gets to kick a little ass, though don’t expect any drop down drag out brawls in this flick. One thing that struck me while watching was how freaking good the movie looks. I’m watching the versions that came in the then-complete Bond box set pre-Quantum of Solace on regular DVD, not Blu-ray and the colors were just ridiculously amazing. Of course, the real thing to attract the eye in these movies is the gorgeous people on screen. I’m sure Connery in his prime is still delightful for many as is the lovely Ursula Andress as Honey Ryder as well as, well, every other woman in the movie.

While the flick might not include the two things that made me fall in love with the Bond franchise as a kid–insane action scenes and crazy gadgets–I still had a wonderful time watching the movie. Having come onto the Bond scene well after Connery’s last film and probably seeing more Moore and Daltry flicks in my formative years, it’s a lot of fun to go back and see how graceful and intimidating he is as the character. This is not a Bond you want to eff with, as the kids say. Since I’ve already live blogged the Dr. No follow up From Russia With Love, I’m not sure if I’ll give it another watch or just move on to Goldfinger. I’m leaning towards the latter, but we’ll see where the day takes me!