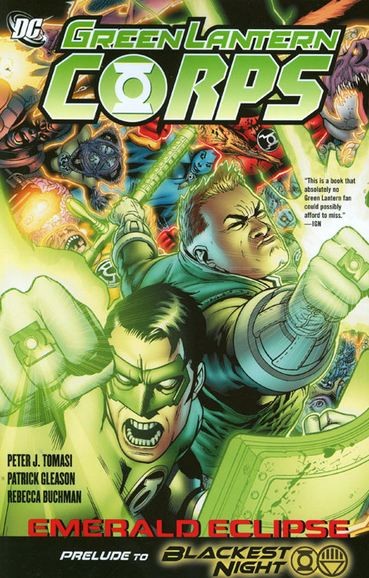 GREEN LANTERN CORPS: EMERALD ECLIPSE (DC)
Written by Peter J. Tomasi, drawn by Patrick Gleason
Collects Green Lantern Corps #33-39
Remember how when I talked about the previous volume of GLC called Sins Of The Star Sapphire that it felt like Tomasi didn’t quite have Dave Gibbons’ flair for treating this book like the cop show it had previously been? Well, that’s not the case with Eclipse which has a ridiculous number of huge moments packed into seven issue. This book contains Arisia and Yat defending Daxam from Mongul, Soranik and Kyle’s relationship moving along at a fast clip, Saarek meeting a Star Sapphire, a battle between Mongul and Arkillo (that’s a personal favorite), Scar engineering a breakout in the Sciencells, Sinestro revealing to Soranik that he is her father, Ash and Saarek finally meeting up on their quest to find the Anti-Monitor, Scar destroying Oa’s protective Lantern-shaped shell, Yat sacrificing himself in Daxam’s sun to save his home planet and Guy and Kyle trying to put a stop to the Alpha Lanterns killing the surviving rioters from the breakout. While reading this book, I was trying to remember when many of those events take place and was shocked how many take place in one episode. It’s like watching “The Puffy Shirt” episode of Seinfeld which not only had the infamous shirt, but also boasts the low-talker woman AND George trying to become a hand model. In my mind, those were all different episodes, but it turns out it’s all one!

Tomasi improved greatly in his ability to handle so many characters and so many rad moments. Patrick Gleason, who for some reason I didn’t realize has drawn most of this series, also seemed to jump a few levels in talent. The way he tackles the fight scenes look big and crazy and choreographed and scary. Next to Doug Mahnke, he’s my favorite artist for this property.

I guess I don’t have a lot more to say about this series other than I have been really enjoying it and, having jumped into reading the Blackest Night, Blackest Night: Green Lantern and Blackest Night: Green Lantern collections, am really impressed with how big and epic the whole thing feels. It’s not like everything that was going on in GLC–which is essentially a secondary book–stops, in fact it’s quite the opposite with things like the Sinestro/Mongul showdown taking place in the middle of the action. Also, for what it’s worth, I think Tomasi and Gibbons before him actually did more to open up a heck of a lot more characters to the reader than Johns did with Hal in Green Lantern. Instead of repeatedly showing young Hal thinking about his dad dying or the conflict with Sinestro, you get looks at Guy’s relationship with Ice, Kyle’s budding romance with Soranik, how different GLs deal with the deaths of their comrades. There’s a lot going on in this book and think it would actually make an insanely entertaining TV series, though it would need a pretty impressive budget. Someone get HBO on the phone!