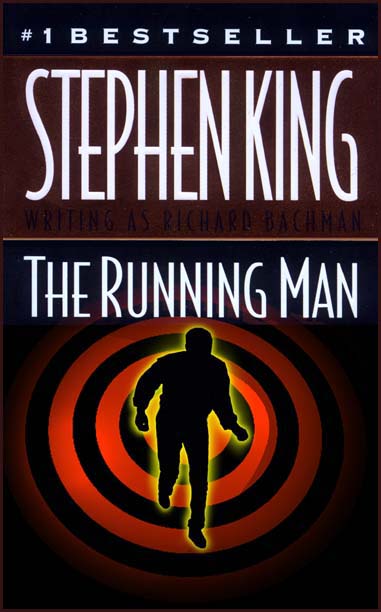 I better be careful, if I keep reading books like The Book Of Lies and The Running Man so quickly, I might not be able to moan about not being able to read very fast. I’ve actually made an effort to use some speed reading techniques I’ve read about, but the long and short of it is that fast paced, easy to understand books just make for fast reading. Sometimes I need to go back to refocus on the words, but I was actually able to read Running Man with the TV on in the background, something I can rarely do.

I picked the book up at a somewhat nearby Borders that’s closing down. I grabbed a small stack of books, including this and King’s Misery. My history with the author includes reading The Shining back in high school, checking out a few short stories including The Monkey, The Langoliers and others. Plus, I’ve been about 150 pages or so into IT for about a decade and have no idea where my copy of the book is right now. I’ve seen the movie based on the book, but it’s not something I have memorized by any means, so it’s not like I was comparing the book to the movie the entire time (I’ll wait to do that after I watch it again in the coming week).

So, in the future, things are pretty bad. The poor have gotten poorer and the rich ignore the poor. Our main character is Ben Richards, a man with a wife who turns tricks for what little money they have in an attempt to feed her family and get money for their sick daughter. The best way to make money for someone in their situation, though, is to become a contestant on one of the many ultra-violent TV (scuse me, Free Vee) game shows. Ben goes through a series of tests and gets picked for the titular game show which sends contestants out into the world with some cash. After a bit of lead time, a group of Hunters starts chasing the man on the run. For every hour he’s free, more money goes to his family and if he makes it 30 days without getting caught, he gets a billion. And when I say caught, I mean killed, they don’t just grab you and put you back in jail. The Running Man has to send video tapes in to the Network twice a day to get retouched and manipulated and put on the air. Turns out Ben Richards is a pretty damn good runner and does a better job than anyone else in the history of the game.

The thing that struck me most about this book is how bleak it is. In King’s introduction he explains that he used the Bachman pseudonym to write books that turned out to be more pessimistic than the books with King’s actual name. That’s definitely the case here. People don’t just have it bad, they’ve got it REALLY bad. Richards doesn’t just have trouble making money (turns out it was for a good reason, actually), his wife is a whore and his daughter is dying. The world isn’t just crazier than the one we know, the air is killing nearly everyone while a huge corporation refuses to sell or give out cheap filters. But all that leads to a pretty epic ending that gets spoiled in King’s introduction. Even having it kind of spoiled for me, King builds towards his ending so deliberately, that it’s not really about whether he will or won’t do it, but why.

I’m a big fan of reading books like this, which are technically sci-fi to me because there are tech aspects that would have seemed futuristic when written in the early 80s. It’s fun to see what writers get right about “the future” and what they don’t. Television shows about people actually getting killed sound pretty out-there, but we do watch some pretty nuts stuff between Survivor and Wipeout (“You know, Fox turned into a hard core porn channel so gradually I didn’t even notice.”). There’s almost no mention of computers and they certainly don’t play the ubiquitous role they do now. I also feel like things are leading to an even more prudish society instead of a more sleazy one, but maybe we’re just hiding things more easily.

All in all, I had a good time reading this book. The fast-paced chase mentality of the last 2/3 keep the plot moving along and, like a lot of great films based on the chase, lots of things get thrown at Richards who also happens to find allies in all kinds of unexpected places. My one complaint about the book is that Richards seems to have knowledge at times that he shouldn’t. I can buy that he gets real cunning when pushed to his limits, but how would he know how to put on a parachute? Ah well, those are the kinds of things you see in action movies all the time. Running Man isn’t a great piece of literary fiction by any means, but it is a fun, action-packed adventure that ranks up with the best of this kind of story in film form. I’m pretty excited to watch the movie version, which takes this story but with Batman villains thrown in if memory serves.