HELLBLAZER: INDIA (Vertigo/DC)
Written by Peter Milligan, drawn by Giuseppe Camuncoli & Simon Bisley
Collects Hellblazer #261-266
Reading Hellblazer books is always a little tricky, especially if you’re like me and only read them in bursts and bits thanks to trades either gotten from Sequential Swap, $5 trade boxes or friends. Putting all the pieces together can be difficult, especially with a character like John Constantine who has been built to have a million skeletons in his closet and old friends to call on him. Unless you’ve got an encyclopedic knowledge of the character, it’s hard to know if whoever’s asking John for help is an established character or someone new being introduced to move the story along. I guess it doesn’t really matter–it’s not easy for a comic geek to let go of his hold on/knowledge of/desire to understand continuity, but I’m working on it–so I’m trying to just jump in and figure it out. For whatever it’s worth, if you’re curious, I’ve also reviewed The Fear Machine, Empathy Is The Enemy and The Roots Of Coincidence. I’m sure I have or will repeat myself in this post compared to those, so maybe you shouldn’t read them…

Anyway, like those other volumes, I quite liked this one, though, also like those others, I’m still not sure if I have any more of a grasp on Constantine as a character aside from him being a badass with ties to the dark arts, but sometimes that’s enough. This book is split between two stories, a 4-parter called “India” and a 2-parter called “No Future.”

“India” is pretty rad, with Constantine traveling to the titular country and facing off against a demon who used to be part of the British effort to take over India. Nowadays, he has virgins sacrificed to him by a Bollywood movie producer, but the system gets a wrench thrown in it when the producer falls for the latest potential sacrifice. Oh and Constantine of course. The story was a lot of fun and pretty tight, but I absolutely love Giuseppe Camuncoli’s artwork. Dude just has such a sick style that fits this book so perfectly. I probably said this before, but he would be awesome on a Hellboy book or maybe one of DC’s upcoming darker books (he might have actually been announced on one, I haven’t been keeping up with the announcements). 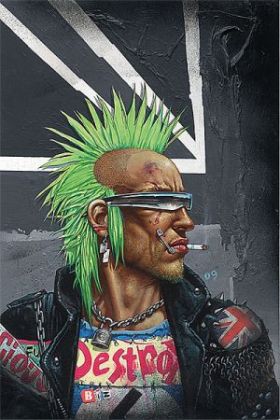 I had an even better time with “No Future” because it goes back to Constantine’s punk rock roots (I’ve actually read one of the books that explained this). His buddy and fellow former punk rocker has built this cult that worships a dummy that supposedly has the spirit of Sid Vicious (I refuse to link to his Wiki page, you should either know he he is, look it up yourself or just watch Sid & Nancy). Constantine’s friend is having his people taken away by the new Conservative party which is made up of zombie demons. Another quick and dirty story, I had a great time with “No Future” especially seeing John done up as a green-haired aging punk. I also really appreciated Simon Bisley’s artwork. He’s a dude I’ve always heard of and appreciated from covers, but not actually read any interiors of, so this was a treat, especially given the subject matter.

With the exception of his relationship to a blue-haired girl who is still alive and a woman who he clearly loved and must have passed away in an earlier volume, I think India is as good of a jumping-on point for new readers. Like I said, Constantine’s a strange character because he seems to know half the planet (the more salacious and devious half, of course) so it doesn’t matter who you know and who you don’t. The holes are filled in for the most part as far as understanding goes. I have a feeling if you picked up the very first Hellblazer trade, he’d be running into old friends and enemies and killing demons or whatever, so why not just jump in here?