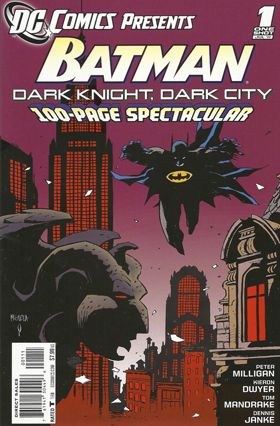 Wow, that is one heck of a title, isn’t it? Seems to me you could either ditch “DC Comics Presents” or “100-Page Spectacular” or possibly both. Also, does it really need a #1 on the cover? Anyway, it seems to me this tiny, cheaper collection format was designed to put out random Batman storyarcs from the two core Bat-books, Shadow of the Bat, Legends of the Dark Knight and the myriad minis starring our hero. I would imagine that, for the most part, many of them will land with me how this one did: just alright. It’s a clever tale that features the Riddler finding some old Gothamite cultist’s journal and getting possessed by a demon. Demon Riddler puts Batman through this series of paces that SPOILER winds up putting him through the motions to prepare him for a dark ritual.Well played Eddie.

As you can imagine, the book is pretty dark, darker than I thought for some reason even though this was well into the grim and gritty period. Seeing Batman stab a dog with a knife is pretty intense. Anyway, the story was a little slow and felt familiar to this long-time Bat-reader, though I can’t pinpoint why. The Riddler reveal is pretty interesting, but it’s kind of like watching a movie you’re not that absorbed by with an interesting twist. Oh okay, cool. What’s next?

Meanwhile, the Detective Comics issue which was also written by Milligan with Tom Mandrake art was just the opposite for me: an interesting story about Bruce Wayne trying to figure out why he wasn’t Batman/where the Batcave had gone, but with an ending that made me not care about what I had just read. This collection’s biggest fault, to me, though is not reprinting the Mike Mignola covers between issues. For the record, there are 88 pages of story in this book, some ads, a 4 page The Search For Swamp Thing preview and a DC Nation column which means there was plenty of room to run the covers. But, if you maybe haven’t read a ton of Batman comics and want to read a darker tale that actually does something interesting with the Riddler, you probably will be okay spending $8 on these four issues. 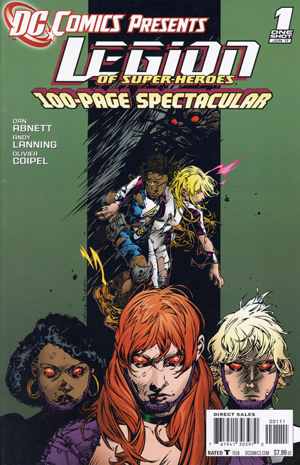 Since I complained about the overly-long Dark Knight, Dark City title, I’ll take a moment to complain about this title as well. I actually think this one should have had an additional subtitle, like Legion Of The Damned. I’m guessing that would not fit on the spine, though. Again, not a big deal, just something that popped into my head.

I moved this mini-trade to the top of my “to-read” pile after reading the first adventures of this incarnation of the Legion. I completely forgot to mention this collection in that post, which was funny because I was literally staring at it while I wrote the post. As it turns out, this bad boy practically ends both the regular LoSH book and Legionnaires. There’s one more issue of each book which leads into the epic and well-received Legion Lost (anyone know if those last two issues are collected in the Legion Lost hardcover?).

Okay, enough about the book itself, how about the content? I really dug this story and it makes me want to keep an eye out for single issues of the previous books and the DnA-written Legion book that followed at cons. I have no idea what went on before this, but the first issue opens with Earth being overrun by the Blight a kind of organic Borg that has overrun the planet and even possessed most of the Legionnaires. Just when Chameleon thinks he’s the last of the bunch, Cosmic Boy, Brainiac 5, Monstress and Apparition return from a wild trip in space that kept them out of this mess as it was going on. Now it’s up to them and a few others–who I won’t spoil, but are on the cover, so I guess it’s not spoiling–to defeat the Blight and save the day. It’s a pretty fun, tight story that really screwed up the Earth and Metropolis, something you don’t really see in comics much without some kind of loophole or get-out. By the end of this book, the Blight have been defeated, but it’s not like Earth and Metropolis are back to normal.

It should also be said, that I wasn’t too confused by what was going on, even though there was a pretty huge gap between my reading of this series. Sure, there’s some characters I didn’t know (Monstress) but it’s not hard to jump into the story because the good guys and bad guys are pretty well defined, so even if I don’t know which Legionnaire Monstress has a crush on or whatever, I know she’s a hero fighting the villains. Nuff said. I was also impressed with Coipel’s artwork. It might not be what you think of when you think of him now because it’s a little sketchier and looser, but still really detailed and stylized. I also appreciated how he drew some of the Legionnaires as if they were actual teenagers. I never for a minute thought that any of the kids in the first trade were younger than 17, so it was good to get the feeling some of them actually looked like their younger age. All in all, this was a great book, definitely worth the price of admission for me and a great precursor to get me excited about the Legion Lost collection.

I mentioned this when I talked about Finals, but I really appreciate that DC has created this new format for collecting their comic books. Purists might not refer to them as trades because they have ads and issue numbers on the cover, but I don’t care about that stuff. In fact, it might be kind of fun to look back and see what was being advertised back in the day. Finals is sitting on my trade shelf between Fallen Angel and The Five Fists Of Science, sure there’s a few more inches of gobbledegook than need be on the spine, but that’s no big deal. My only real complaint (that title stuff is mostly grousing) is that they’re not including the covers in these things. I hope DC keeps doing these even with the relaunch.