After an abundance of seriousness thanks to last week’s FF entry On Deadly Ground, I was looking forward to something goofy and fun. Gymkata completely fits that bill as it features a world class gymnast who trains to become a fighter to head off to some mysterious country and compete in a strange game that looks like it was designed by the American Gladiators folks.

Overall, it’s a dumb movie. Things happen and don’t make sense, not the least of which is the gymnast dude throwing in all kinds of tumbling for no reason and always coming across something that looks suspiciously like gymnastics equipment. They tried really hard to cram that idea down our throats because the star was an actual Olympian. In other nonsensical features, the faraway location is supposed to be in a location near Pakistan and yet all the people in the village look like the kind of folks you’d see at your local Polish festival. The leader of the village looks like a freaking Mel Brooks character! It just makes no sense.

But, and this is a big but for those of you who like bad movies, it is definitely so bad it’s good. You could play a drinking game with all the logic gaps and get a good drunk on if not full on blotto. The game itself involves several guys in windbreakers who look like background players from Goodfellas, given a few minute head start in front of an army of ninjas, some riding horses, some with spears and others with bows and arrows. They even shoot arrows at you while you’re climbing or crossing ropes! But wait, isn’t that against the rules? Who can keep track.

From a fight fan perspective, it’s more “WHY’d they do that?” than “How’d they DO that?” Everyone looks like they’re trying really hard to be serious, but goofiness abounds with choppy editing, mile-away fake punches and all that tumbling I mentioned. There’s even a scene where our hero is stuck in an insane asylum punching old ladies and generally trying to wreck shop on the mentally infirm. It’s hilarious, see below.

There’s also a few odd, probably unintentional comic book references. For starters, the main character’s dad preceded him to this strange, hard to reach city, which reminded me a lot of the Iron Fist mythology. If you can’t figure out how that will play into the story by the 15 minute mark you haven’t seen enough movies. Also, there’s a scene in the flick where the gymnast dude is wearing some kind of goofy ceremonial robes that look an awful lot like Karate Kid’s from the Legion of Super-Heroes. 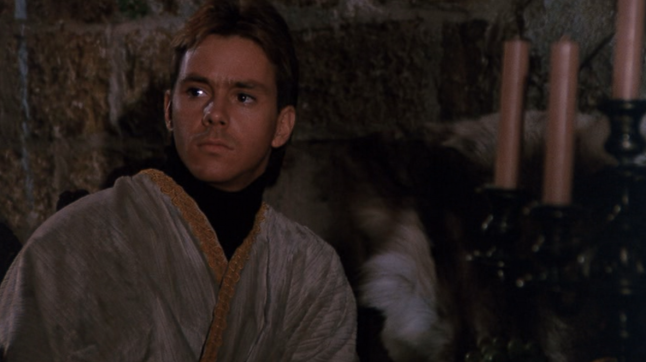 If only he had a higher collar! Anyway, Gymkata is definitely a bad movie that’s worth watching. As I sat through my viewing I desperately wished I was hanging out with a bunch of my buddies with several cases of beer a few pizzas and time to kill because we would have had a ball with this one. It’s ridonc all around and I kind of love it.