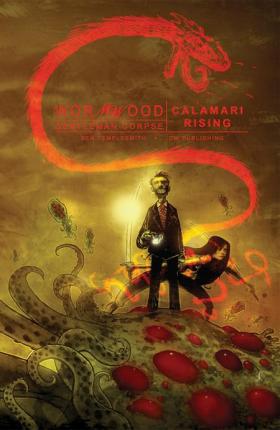 Geez, I can’t believe it’s been almost three years since I reviewed the second volume of Ben Templesmith’s Wormwood Gentleman Corpse. Don’t let that seem like a reflection of how much I like this world Templesmith has created, because this is one of the most fun, bonkers original comic universes around. The basic concept revolves around Wormwood, an interdimensional worm that inhabits corpses who currently hangs out on earth with a robot he built named Pendulum and a former stripper with living tattoos who goes by Phoebe at a strip club located on top of a dimensional portal run by Medusa. Make sense? It might seem more complicated than it is.

Basically, Wormwood is an interdimensional Hellblazer, a mystical dude with a huge past that’s always coming back to bite him–and reality–in the ass. This time around, it’s The Brotherhood of the Calamari, a Lovecraftian race with a mad on for Wormy that leads them to take over Earth and almost succeed. While Pendulum, Phoebe, Medusa and the girls do their best, Wormwood jumps dimensions and winds up teaming up with a reality-hopping Elvis set on killing every other reality’s Elvis to become a god.

The four issues are packed with sci-fi action and quips plus Templesmith’s rad art. He has such an amazing talent for enhancing his pencils with computer effects that really pop and shine off the page thanks to the glossy paper the collection is printed on. It can look a little dark at times, but I think that might be a trick to actually pull you in closer to the page, like a comedian whispering on stage. If you’re into Hellboy or Hellblazer or pretty much anything, I recommend giving these books a look.

I’ve gone on record as being a big WildStorm fan, have read and reviewed most of the Authority trades (the first five books here and the two Revelations books here) and am a huge fan of Garth Ennis’ Preacher (you’ll have to search around for those posts as they’re spread out), one of the greatest pieces of fiction ever created. So, with all that, it should come as no surprise that I wanted to check out The Authority: Kev a book set in the WildStorm U featuring a non-powered SAS officer with terrible luck dealing with the Authority, specifically Midnighter and Apollo. He’s kind of like a more competent, but equally as unlucky Soap from Ennis’ Punisher.

The actual product is pretty much exactly what you would expect from that basic set-up if you’re familiar with the creators and concept. The first one-shot in the collection follows Kev as he’s sent to the Carrier to kill the Authority for the British government which he actually succeeds at thanks to a magic gun. But, it was all a set-up by an invading alien force. The Carrier helps Kev fix things, but this adventure puts him on the Authority’s radar and he winds up working with Midnighter and Apollo after the rest of the Authority wind up on the wrong end of some alien tech. They fight zombies and aliens and some other things, plus we get more of Kev’s history. The collection also Glenn Fabry interior art which looks very much like his covers, but just in pencil instead of painted. I’m a fan of his too, so seeing him to interiors is fun.

KEEP OR DUMP? I’ll be keeping both of these volumes. I think I’ve got the other two Wormwood volumes in boxes somewhere (I hope I do at least) and I’ve kept nearly every WildStorm book I’ve ever gotten. Some day, I’ll get them all together and evaluate which ones I want to keep for later reading. Also, I’d like to read the next volumes of both books, so between that and wanting to keep the trades, that’s a pretty good endorsement.