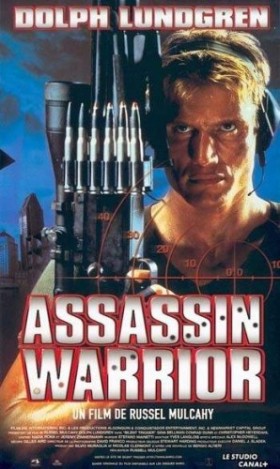 I tried, you guys, I really did. I know I’m not always consistent with my recurring blog posts like Friday Fisticuffs, Trade Posts or Ad It Ups, but I’ve been trying to get back on schedule. I figured that a Dolph Lundgren movie from the 90s would be the perfect FF subject, but I was terribly, terribly wrong. Silent Trigger (or Assassin Warrior as it’s apparently known in France) suuuuuuucks. To try and remedy that, I figured I’d watch a Chuck Norris movie. That should be great, right? Nope, not at all. But I’ll get to that.

First, Silent Trigger. Bleh. What a boring, crappy movie filled with people who seem to be trying really hard to do things they don’t really understand. The female lead in the film seems to have studied at the Ertha Kitt School of Acting because she is forever talking like 60s Catwoman. Meanwhile, the cinematographer or whoever shot this thing starts off trying to do all these crazy angles and whatnot to disorient you, but you know the problem with that? The people and things being shot aren’t interesting. At no point throughout this film did I care about anyone or anything (except when the woman gets beat up, but that’s just because I hate seeing that in general).

I guess I should explain the plot. Dolph’s a sniper and the woman is his spotter. They’re on a job somewhere that goes bad. He doesn’t take the shot and they’re on the run. That right there should have been the plot of this movie, but instead that’s told in flashbacks and our main story finds them teamed back up on another job in an under-construction skyscraper with two guys guarding it, one of whom looks like Randy Johnson and has terrible looking blue spider tattoos all over him because he’s a crazy cokehead. Or something.

The plot, such as it is, is these two people sitting around talking and remembering stuff. That could work with a solid cast, but when Dolph is the best actor you’ve got, don’t build your movie around character beats and drama, JUST BLOW SHIT UP. Additionally, the threats never seem that threatening, but maybe that’s just because I felt like I was watching cartoon character just going through the motions and checking off all the boxes in the list of action movie cliches.

But, beyond all that, there aren’t any fight scenes! Well, there’s a few, but most of the action in the flick is gunplay. That’s on me, of course, I can’t blame the movie for not being something it never claimed to be. There’s one fight between Dolph and Randy with lead up to what should have been another, but that gets cut off at the knees in a moment that’s supposed to show how much trouble they’re really in, but instead just deflates the one possible interesting thing in the movie.

You know what the coolest part of this movie is? The poster. So, just look at that and skip the flick.

I should have known better. When I saw that The Cutter, a Chuck Norris Joint, was released in 2005, I should have gone on by. But, I hoped the old dude still had some strength in those ass kicking legs and hoped for the best. You know what’s better than watching a latter day Chuck Norris movie? Everything. It’s so strange because–to me at least–he looks like he has for the past 10 to 15 years, but he sure has heck doesn’t move like that. There’s a brief scuffle in the beginning of the film where he looks so concerned about breaking a hip that it penetrates your brain from the screen. I didn’t even realize why until I thought about it, but I actually felt nervous watching and it wasn’t because I thought his character was in danger, I was actively worried that one of my childhood idols would slip a disc or something.

The plot on this one is pretty standard. Chuck was hired to find a woman’s daughter, but she gets iced before he can save her. He feels bad and decides to take another job for a woman who had her diamonds stolen. I couldn’t tell if there was an actual connection between the two crimes, but it doens’t really matter. He winds up hanging out with this woman and also Tracy Scoggins who’s a cop I think.

I’ll be honest, I turned this one off in favor of taking a shower while the kid took a nap. I just didn’t care enough and seeing what was left of the awesomeness that once stood toe to toe with Bruce Lee made me sad. Heck, there’s one scene where Chuck is supposed to dive over a two foot tall wall to avoid a shooter and they had to speed the film up! I’d rather remember him as Delta Force or Bruce’s sparring partner than in something like this or the also disappointing Hellbound. I’ve got my fingers crossed that he doesn’t make me cringe in Expendables 2.