I’m still insanely behind on my link reading, but I figured I’d get these particular ones from the past month or so out there for all to read…and to unload a bit.

My pal Rob Bricken left ToplessRobot.com for io9.com. I will definitely miss coming up with crazy lists and writing them for him. Onwards and upwards good sir!

Speaking of me writing stuff, in addition to my usual CBR duties covering Image and doing daily posts for Spinoff Online, I also launched a collecting column over on CBR called Toying Around, I’m pretty psyched about it, here’s the latest one.

While on the subject of things seen on CBR, I was really excited to hear about IDW reprinting Wally Wood’s T.H.U.N.D.E.R. Agents material. Everything that guy did should be in trade format if you ask me.

Would it be awesome to have Robert Plant’s level of talent where you just go over to a friend’s house and make a record without really meaning to? (via Rolling Stone) 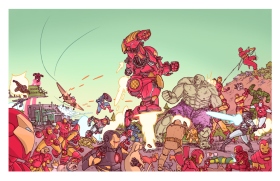 I would very much like to see Ulises Farinas draw all the comics, much like he draw all these Iron Man armors going up against the Hulk.

I know it’s well past the election, but I finally caught up on a few political pieces I really found interesting. First off, director Adam McKay’s HuffPo piece pointed out to everyone that, even though he wasn’t outright saying it, Romney’s politics are almost exactly the same as George W. Bush’s.

I also found Matt Taibbi’s Rolling Stone piece on the big/small government argument is essentially moot considering how huge Bush made the government when he was in power. When will people start actually listening to facts?

The HMAD review of Don Coscarelli’s John Dies At The End makes me really excited about seeing that flick.

John Carpenter talked to Hero Complex about They Live! What an awesome movie.

One of my favorite parts of the year is when Tom and Lorenzo do commentary about the Victoria’s Secret fashion show. Here’s part 1 and part 2. Fun stuff.

Elmore Leonard did the Proust Questionnaire over at Vanity Fair. That guy is so damn cool.

I’m embarrassed to say that I’ve never actually read anything by Harlan Ellison, but I will read his new DC graphic novel with the amazing Paul Chadwick called 7 Against Chaos (via Blastr)

I liked this Hero Complex piece about Adventure Time, then again, I like pretty much anything having to do with that wonderfully weird show.

Some idiots want to secede my hometown of Toledo back to Michigan. What a great use of one’s time. (via The Detroit News)

I like the idea of a new Kurt Cobain documentary, though less so when I find out Courtney Love’s partially involved. I don’t trust that lady. (via Rolling Stone)

Ron Marz’s Shelf Life column over on CBR focused on his days at CrossGen which actually sound a lot like my days at Wizard: a lot of people from all over the place coming together and doing some great work. He wrote a second CG-centric post that I have yet to read, but am excited to.