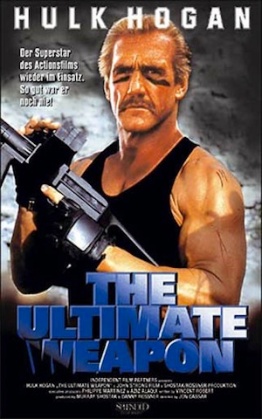 I’ve had pretty great luck lately when it comes to checking out action movies. First The Raid lived up to and exceeded the hype, then I was blown away by Universal Soldier: Day Of Reckoning a few weeks back and also had fun with the nowhere near as good Universal Soldier: The Return and Sudden Death. That streak came to an end the moment I decided to watch Hulk Hogan in The Ultimate Weapon, but that didn’t come as much of a surprise because, well, it’s a Hulk Hogan movie.

Let’s see, what’s the plot of this movie? The basic is that Hulk Hogan decides to leave his mercenary lifestyle behind, marry his lady and get to know his estranged daughter. This goes sideways when it turns out that Hulk’s daughter is your basic sad stripper with a heart of gold who breaks her own rules and decides to go home with a guy only to have him cross the line. In the process she steals some important information from him and runs out. Sounds like a bad situation, but the timing is actually pretty perfect because pops is back in the picture and he’s really good at killing stuff.

All this also winds up tying back in to the beginning of the movie which first saw Hulk teaming up with his old partner’s son for a mission (after a bitchin’ obstacle course montage) and flipping on the guy they were supposed to help because he was bad. Or something. Again, who cares, right? These bad guys wind up being connected to the daughter’s bad guy which leads into a big final battle on a farm house.

I normally wouldn’t even bother writing about this movie but decided to for a trio of reasons. First, there’s some hilariously silly things going on that I want to write about. Second, this fits interestingly into my expanding idea of what makes a good action movie, an okay one and a bad one. And lastly, I want to have a record of my experience to both remind myself not to watch this movie again without buddies and beer and maybe help a few other people avoid it.

What makes this movie so bad isn’t Hulk’s wooden, forced acting, the cheesy lines, the seemingly shoestring budget or the kind of plot you’ve seen a million times, but how dumb it is.  Just watch the above clip. In addition to it being pretty funny, it really gives you an idea of what’s wrong with this flick. That part is from the big final action sequence where the bad guys are laying siege to Hogan’s house and he’s racing back to defend his fiance and daughter. Luckily his new partner is hanging out, right? Well not really. This guy — who we saw be an incredibly efficient soldier in the beginning of the film — runs around trying to take out bad guys with his sniper rifle…wearing the brightest yellow shirt I’ve seen this side of the U of M basketball jerseys!

Those are the kinds of goofs that can really kill a project. Making them all the worse, they don’t cost any money to fix. Have the dude take his shirt(s) off and go about his job and you’re good. It just shows a much deeper problem: no one really cared  or thought about the movie from the script to the actor. It’s pretty clear from the proceedings that everyone was just in this for the paycheck and it shows in just about every frame. 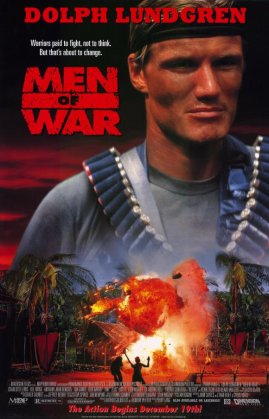 I thought the exact opposite of the Dolph Lundgren movie Men Of War which does well with what it has and actually goes a few places that your average 90s action movie doesn’t. Lundgren plays Nick Gunar (which is awfully close to his Expendables character Gunnar Jensen, interestingly), a mercenary who is hired to gather a team and head to an island in an effort to convince them to sign some kind of deal with Greg from Dharma & Greg and his nerdy partner. After a quick “getting the team together” batch of scenes and the establishing of their one-time partner-turned bad guy Keefer, Dolph and company get to the island only to find that they’re pretty good folks. They weren’t told what the business guys are actually looking for but assume its jade, which sets some of the team on edge because they want the hidden treasure.

Being a pretty good dude all around, Dolph eventually decides to stay and defend the island. This is after the investors explain that they want to kill all the inhabitents and strip mine the crap out of the island for bird crap (didn’t really understand why, but that’s not super important). Dolph offers his people the opportunity to stay with him or go back to the investors and their boat. A big huge satisfying battle eventually follows.

What I liked so much about this movie is the balance of action and genuine-seeming heart. In so many of these movies the motivations seem super-tacked on and unfelt by the characters or actors. In this case you see Dolph going through the emotions, not just the motions. Dude’s a really solid actor. SPOILER WARNING, the following video is of the climactic fight between Dolph and Keefer. You’ve been warned.

I wouldn’t say that Men Of War was a game changer by any means, but like US: DOR this movie takes itself seriously from the beginning and presents itself professionally. There are definitely aspects that aren’t super serious specifically bad guys Keefer and Goldmouth who both come off as cartoonish and silly. Between them and some of the more widely drawn members of his team, the movie doesn’t fully take advantage of the opportunities it could have proceeded with and done something really cool and amazing. Still, Dolph does a lot of the heavy lifting in this well made action movie that I highly recommend.