After being so impressed with Universal Soldier: Day Of Reckoning, I wanted to go back and check out the other movies in the Soldier franchise, just to remind myself of what had happened. I didn’t expect them to be as good as the latest installment, but I was curious to see what had been done in those other films and how the mythology had been handled. The first movie isn’t on Netflix Instant and neither is the third, but The Return was, so naturally, that became the next one I watched. Turns out it wasn’t terrible, but definitely has a very 90s vibe to it.

What was so 90s about it? Well, one of the central figures in the film is a computer called Seth (or more likely S.E.T.H., though I don’t feel like looking up the reason) who spends the first part of the movie existing as a cube in a ball at the end of some kind of robot construct. He basically looks like a Trapper Keeper from the same year, but sounds like Michael Jai White. There’s also a character named Squid who plays the hacker in the movie. He has blue hair, fancies himself some kind of cyber anarchist and makes every character in Hackers look GQ. Oh the 90s.

Anyway, the film follows Jean-Claude Van Damme’s character from the first film, Luc Deveraux. For some reason he’s not a UniSol anymore, though I don’t know if they every explain how or why. I remember almost nothing from my first viewing of that movie, so this was a curious development. He does hang out with and train UniSols, though, with a few pals. Everything’s going okay until one day — a day when a news crew is in the building, of course — SETH figures out that the program is going to be shut down. He then unleashes all of the Soldiers from the military’s command and sets them against Deveraux and company. The local General wants to just blow the building up, but Luc can’t allow that because,  yup, you probably guessed it, Seth kidnapped his daughter. SPOILER WARNER, the following video is the final battle from the movie, so watch at your own discretion:

Hokey, contrived and over-used plot lines aside (what do you really expect from a 90s action movie?), I had a pretty good time with USTR. In his prime, Van Damme was one of the best action guys around, not the greatest actor in the world, but able to play concerned father while kicking ass at the same time. I was also impressed with both White and Bill Goldberg’s performances. Why didn’t either of these guys really hit in the film industry? They both cut imposing figures — Goldberg is like sculpted meat in this thing — and can handle themselves in a fight scene, so what happened there? Anyway, if you’re in the mood for a mostly fun action romp, give this movie a look, but don’t expect the greatness seen in Day Of Judgement which gets better and better in my memory the more “just alright” and downright-bad action movies I watch. 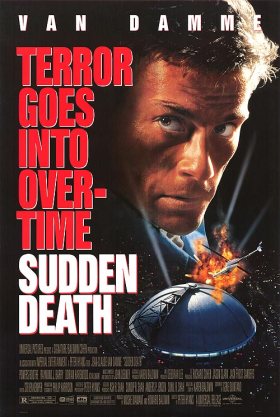 For me, JCVD’s movies are like potato chips or whiskey and sodas, I can’t have just one. While clicking through Netflix Instant I saw that Sudden Death had been added to the list of flicks. I have trouble remembering which of these movies is which and it doesn’t help when Netflix claims the film takes place in a baseball stadium (it’s a hockey game).

Van Damme stars as the difficult to kill Darren McCord, a firefighter in Pittsburgh who had some bad luck with a blaze. After that, he’s having a hard time of things and has taken a safer job as the fire marshall of the Civic Arena. Or something. There’s a lot of details in this movie that seem way too complicated, but we’ll get to that more in a bit. McCord takes his son and daughter to the last game of the Stanley Cup finals between the Pittsburgh Penguins and the Chicago Blackhawks, game that the Vice President is also attending. Powers Boothe takes this opportunity to kidnap the VP and hold him for ransom. That’s the simple version. There’s more about unfreezing bank account numbers and setting the time table of the caper to the game itself, but all you really need to know is that Powers Boothe is the bad guy, something that becomes eminently clear the moment you look at this guy. Have you seen him on Nashville? He’s gotten more evil looking as he ages. I think he’d make Hannibal Lecter uncomfortable at this point.

Because he’s awesome and because his daughter gets dragged into things — what is it with JCVD’s kids movie getting involved with villains? — McCord has to face his fears and fight…ahem…fire with fire (ie violence with violence, sorry, couldn’t resist the pun). This leads to a series of fights with individuals in various parts of the arena including my personal favorite, one with a woman in the penguin mascot costume. It sounds goofy, but it actually makes sense given the plot.

What I really liked about this movie is that it took full advantage of the setting, one that you almost never see in films. Even the above penguin-lady fight is unique even though it takes place in a kitchen. I like that kind of ingenuity used in designing the fight scenes. There’s also a nice flow from confined to dangerously huge as not one but two battles take place on the dome of the Civic Arena. It’s nowhere near a perfect film because there are some goofy moments and the occasional bad effect (the showcase one at the end of the film looks 15 kinds of bad), but overall I had a really fun time with the movie and think you will too if you’re jonesing for some vintage Van Damme.