In my mind Gone In Sixty Seconds and The Fast And The Furious came out pretty close to one another. I remember walking out of the latter and thinking the former was a lot better. I still stand by that opinion which is reflected in the simple fact that I’ve watched Gone just about every time I’ve seen it pop up on cable, while this weekend was the first time I watched Fast since it came out. I can’t remember for sure, but I think I kept up with the series through Tokyo Drift and then lost track of it. Like a lot of people in the same boat, I was pretty surprised when the last three films made huge, ridiculous money in theaters. So, when I came across the first movie on TNT this weekend, I figured it was worth another watch.

The basic idea of The Fast And The Furious is that undercover cop Brian O’Conner (Paul Walker) is trying to get in on the underground street racing scene in LA to try and find out which crew has been robbing semi trucks. He winds up crossing paths with Dominic Toretto (Vin Diesel), his sister Mia (Jordana Brewster), his girl Letty (Michelle Rodriguez) and the rest of the gang. O’Conner falls for Mia and winds up deciding if he’s going to stick with the cops or side with Toretto and his crew who may or may not be the aforementioned thieves.

The story’s fun and still holds up pretty well, but I would imagine a kid discovering this movie after watching Fast & Furious, Fast Five or Fast & Furious Six would snicker at a few things. First and foremost, the racing scenes in the beginning don’t look great by today’s standards. When the NOS hits actual moving cars turn into what looks like humans superimposed onto slot cars. I giggled a bit at that point. But the film is also very 2001 when you watch it from the music (Limp Bizkit’s “Rollin'” and lots of Ja Rule who’s also in the movie) to the clothes. I’m also not so sure if illegal street racing would be as huge of a draw as the movie makes it seem, but that’s just a minor realism problem I had because anything illegal makes me nervous.

Aside from that stuff, which was more nostalgic and funny to me but could be a deal breaker for others, I enjoyed this movie. I remember walking out and thinking Diesel was pretty cool and imagining myself driving some crazy fast car instead of the 1994 Ford Aerostar Mini Van I actually drove. It’s a fun movie with cool characters doing cool things, the exact kind of thing I like watching on a Saturday night. Still, it’s hard to believe that this movie launched such a juggernaut of a franchise! 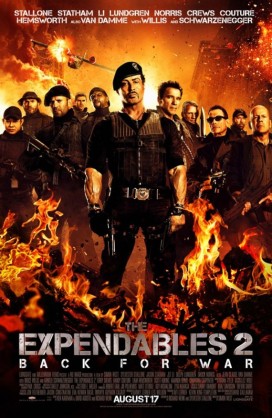 While on something of an action kick, I figured I’d give Expendables 2 another watch. I wrote about the film and how it’s basically the perfect franchise last December, but for some reason the main aspect of the film that stuck with me was a sense of corniness and jokiness that came especially from Arnold Schwarzenegger and Bruce Willis who make several jokes about their respective film franchises. In reality, though, that’s a very small portion of the film and I’m glad I watched it again to update my memories.

Holy crap, you guys, that opening scene with the Expendables split into three different tank-like cars blasting their way through a bad guy stronghold is AWESOME. See below clip for proof. Then you’ve got Liam Hemsworth who is honestly fantastic in this film. He brings a youth and honesty to not only the role but also the team that seems like it just can’t fit in with these grizzled veterans. On top of all that you also get a wonderful villain turn from Jean-Claude Van Damme who doesn’t get to be quite as awesome as he is in Universal Soldier: Day Of Reckoning but gets to have more fun with his evilness. JCVD is joined by Scott Adkins, one of the best younger on-screen fighters around who squared off against the vet in Day Of Reckoning, gets to team up with his idol this time.

I also appreciate how much Dolph Lundgren got to do and how much of his real self got put into the character. Both he and Gunnar studied Chemical Engineering in college only to drop out to play bodyguard for a women (in Dolph’s case it was Grace Jones who helped get him a gig as a bad guy in A View To A Kill. In this case, the references to real life didn’t bother me while the ones to movies did. I can’t quite explain why that is, maybe it’s because I felt like you needed to have a deeper knowledge of these guys beyond just their films to get the joke? It’s cool being in the more exclusive club, you know?

Sure, the jokes are still a little groan-worthy and Chuck Norris literally comes in and out of the movie out of nowhere, but the second time around I expected these things and therefore they didn’t bother me as much as they might have the first time around. In my original review, I said the action scenes might have suffered because of the quips, but that thought didn’t even enter my mind this time around. Sure, many of them are built around the various guest stars, but that’s okay. I don’t expect a super-organic and realistic action film along the lines of Haywire when I’m watching an Expendables movie. These guys need to go for capital A awesome every time and nail it as often as they can. Here’s hoping that’s the case for the third film! I still want to see a movie where Jason Statham fights JCVD though!