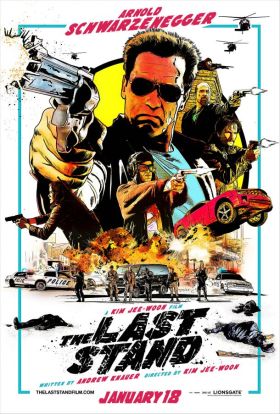 I think it’s pretty clear by now that I’m a sucker for an action movie, especially one starring the heroes who populated the explosions and punch-filled films of my youth. Even if I didn’t actually see them until I was a teenager, these larger than life characters seemed to be everywhere and could do anything. Of course, those guys have gotten older and some of them, well, they haven’t held up so well. I was worried Arnold Schwarzenegger would fall into that category when I first started hearing about The Last Stand. I mean, dude’s 65 and was kind of busy as the governor of California, so it’s not like he was able to keep in as much shape as someone like Stallone, right? I think a lot of people might have had that idea in mind, which is why the film tanked only bringing in $12 million here, but earning a total of $37 million worldwide which still didn’t match the $45 million budget.

One other problem with the movie is that the plot is kind of silly when you break it down to one sentence: a soon-to-retire border town sheriff must rally the townspeople to stop a fugitive drug dealer in a super fast car from crossing over into Mexico. That car bit made me chuckle more than a few times when I wrote about this film over on Spinoff Online. But, what makes this movie rad — and it is rad, make no bones about it — is that director Kim Jee-Woon (A Tale Of Two Sisters, The Good, The Bad, The Weird) took Andrew Knauer’s script seriously and shot this thing beautifully. In fact, everyone in the cast — including Luis Guzman, Forest Whitaker, Peter Stomare, Eduardo Noriega, Jaimie Alexander and Johnny Knoxville — committed and made this a really well-acted, fantastic looking film.

To expand a little bit on the plot, Whitaker’s character is on the hunt for drug kingpin Noriega who’s in his fast car — faster than a helicopter we’re told — trying to get back to Mexico. Whitaker and his team discover Schwarzenegger’s town might be one of the places the villain is heading at around the same time that the sheriff and his deputies find one of their own dead. They start unraveling what’s really going on: Noriega’s people are actually building a bridge in the remote town across a canyon that will allow him to leave. Since the town’s in the middle of nowhere, they’re counting on no one noticing, but also have about a dozen mercenaries with huge guns  lead by Stormare willing to kill anyone who does. After an initial encounter with the bad guys, Schwarzenegger vows to put a stop to this madness, heading over to the local gun nut (Knoxville), deputizing him and using his arsenal to take out the mercenaries and stop Noriega.

I mentioned how good this film looks and it really can’t be overstated. Jee-Woon takes full advantage of the desert-like locale. I don’t know much about lenses or angles, but I imagine he or his cinematographer Ji-yong Kim certainly do. Everything from the night time farm-based shoot out and the western style showdown in the middle of town during the day to the car chase through the corn field and the epic-looking final battle between the man who thinks he can buy everyone and everything and the man who can’t be bought just look crisp and stellar (especially on the Blu-ray I got from Netflix). You can get a bit of that from this NSFW clip from the movie:

I like this clip a lot, actually because it kind of encapsulates the whole movie. It looks great, the violence is well executed though sometimes cartoony and it captures some of that small town attitude. I’m not a big fan of how broad Johnny Knoxville’s character is, but it’s a minor quibble from a film that allowed me to enjoy seeing a 65 year old mean beat the crap out of a bad guy and not worry about him breaking a hip.