Before jumping into my review of Pacific Rim, I want to talk about two things running through my mind as I was heading into the theater Saturday evening. First off, I’d been reading a lot that week about how this movie was going to tank. That’s one of the downsides to having a gig in the entertainment industry, you’re constantly inundated with the business-y side of Hollywood, the kind of stuff most people don’t really care about. The problem, though, is that sometimes the projections about how well a movie is going to do leading up to its release wind up poisoning the well a bit for the people who do pay attention to these things. “It’s not going to do well? I’m not gonna go.” I don’t have a solution for those aside, but the news bummed me out. Did it have something to do with Despicable Me 2 and Grown Ups 2 doing better over the weekend at the box office? Maybe. Then again, those more family friendly movies were going to be big no matter what.

The other thing rolling through my head was, “THIS is going to be what I always wanted from a Godzilla movie.” As a kid, I loved the bits and pieces of giant moster flicks I’d catch on TV, but when I finally turned 16 and started getting tapes by the backpack-full from Family Video I discovered something rather unsettling: a lot of those movies (like Gamer vs. Viras) are super boring. All you really want is guys in rubber suits fighting over a cardboard city with toy tanks shooting at them, but what you get is a little bit of that with a lot of scientists talking about how to stop the monster. Yawn.

I figured that a director like Guillermo del Toro would be able to figure out a way to balance the giant action with the smaller character moments and that’s what Pacific Rim delivered as far as I’m concerned. The story takes place on an Earth in which an inter-dimensional portal has opened up in the ocean. Said portal spits out giant monsters — dubbed kaiju — that humanity has to fight. The human race took on the first one with conventional weapons, but eventually built gigantic robots called jaegers to handle the menace. The jaegers are so big, though, that you’ve got to meld two minds to run them. Two pilots — usually relatives — literally link minds to drive these things and fight the baddies. Charlie Hunnam’s Raleigh Becket is a one-time jaeger pilot who winds up working for his old boss Stacker Pentecost (Idris Elba) and new co-pilot Mako Mori (Rinko Kikuchi) to try and put a stop to this nearly decade-long menace once and for all. There’s a whole heckuva lot more going on, of course, but I don’t want to get too spoilery (yet).

Guys, I loved this movie. It delivered exactly what I wanted and even a little more. The robots versus monsters scenes were fantastic with everything from spinning blades and swords to battleships coming into play. But there’s also a real sense of menace to the film. They got pretty good at taking on the kaiju for a while as Becket tells us in the opening monologue, but then things got crazier with bigger, more dangerous monsters attacking. A pair of scientists played by Charlie Day and Burn Gorman are doing their best to figure out what’s going on, but in the meantime you get the sense that the world is hanging in the balance. Some politicians have decided to bury their heads in the sand and try a fairly foolish means of defense (which might seem a little insane, but I bought it enough), but luckily for earth there are some very brave men and women from all over the globe working together to put a stop to it.

As a kid I always wanted to cut out all the boring stuff with people and just watch the fights, but in this one, I thought there was a good deal of humanity interspersed throughout. Sure, a lot of it’s the kind of stuff you’d expect. A leader who considers his image more important than his well-being, a cocky fighter unsure of why the hasbeen and rookie have been brought in, a person who hates the kaiju for destroying their family (that flashback scene kicked me in the gut, I’m such a wuss when it comes to kids in films these days). But when those characters are played well — and I thought they were for the most part — a bit of new life is breathed in. Plus, even if you don’t dig the, you wait a little bit and a robot rips a monster’s tongue out, so it’s cool. 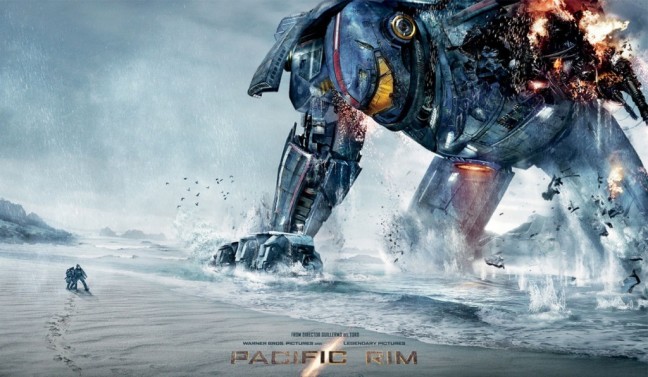 There were a few elements of the film that didn’t sit particularly well with me. Minor SPOILERS follow. I enjoyed Hunnam’s performance, but the way he spoke was kind of distracting. The actor is from England, but he sports one of those accents that doesn’t sound like it truly belongs on either side of the pond. I had a similar complaint regarding Freddie Highmore’s performance in the first episode of Bates Motel. I’m not sure if this is just how he talks or how he was directed to speak, but it was distracting. I also wondered why the manner of defense against the kaiju was so segregated. You’ve basically got the jaegers and a giant wall, but the two are almost completely unrelated. Wouldn’t it make sense to have cannons that can do the same thing that Gipsy Danger’s fists can? They’ve been fighting these monsters for 6 or 7 years and no one thought of building up the borders in a different way?

But those are fairly minor quibbles. On the whole, I thought the story had a lot of fun, new elements that made sense and also had fun with sci-fi elements. The mental handshake stuff was cool and how can you not love ridiculously gigantic robots being built in even bigger bunkers driven by two people? The basic concepts get thrown at you pretty early in the movie, so if you’re not on board with the movie science, then you might want to skip the whole thing altogether. As it is, I enjoyed seeing a big budget spectacle that wasn’t based on anything but writer Travis Beachum and del Toro’s imaginations. I was far from disappointed by this film and would recommend anyone who though the trailers looked cool to go check it out.

Okay, SUPER SPOILER TIME. This is so SPOILERY that I’m putting it after the jump if you happen to be reading this post on the main page. If not, you’ve been warned.

Again, if you haven’t seen the movie stop reading because this is all ending talk.

Seriously, go away if you haven’t seen Pacific Rim. Keep scrolling if you have.

Still here? Okay, how bummed out do you think del Toro was when he saw The Avengers? Both movies have nearly the exact same ending: an armored being has to carry a nuke through an inter-dimensional portal to blow up an alien species and just barely makes it back without dying. I’m not the kind of person who thinks that one cribbed from the other or anything like that, but, man, that must have been a kick in the gut. “Oh, the biggest earning movie of all time has the same ending as ours? That’s…great.” And, it’s not like the ending could have been altered too much because it’s so directly connected with the rest of the story.