For the most part, when it comes to remakes of prominent 80s slasher films from the past decade or so, I’m not a fan. I really disliked Rob Zombie’s Halloween and wasn’t a fan of the Platinum Dunes version of Texas Chainsaw Massacre (though I kind of liked TCM: Beginning, so go figure). It’s not so much that I can’t believe my beloved crazy murderers are getting updated or changed, it’s that there should be certain parameters that get addressed and ideas hit in any given property or franchise otherwise you’re dealing with a completely different thing. I fully understand that that’s exactly what an old fuddy duddy would say, so I guess that’s where I’m at.

Even with all that said, I actually liked the 2009 reboot of Jason Voorheese in Friday The 13th. The movie acted as more of a remake of the first three films from the original series with nods to Mrs. Voorheese being a maniac, Jason killing while wearing some funky headgear and him finally grabbing the hockey mask. The film doesn’t actually involve any campers which is a bit of a bummer, but this holds with reality better than the original films when you think about it. Who’s going to keep opening camps on a lake where a madman has created his own private hunting grounds? Those elements were still in the film, though, in the form of the abandoned camp.

It’s buildings like these where Jason has made his home. He’s basically been living in the woods for 20 years on his own, killing and maiming as he sees fit. His warped mind is reflected in the home he’s made for himself which looks like what you’d expect from a hulking man with the emotional capacity of an 8 year old (who also happens to murder people).

And boy, does he murder a lot of people. There are actually two sets of victims in this film, the first is basically pre-credits fodder who show the audience what Jason is capable of and then the second that’s staying at a rich asshole’s parents’ cabin near Crystal Lake. Meanwhile, Jared Padalecki’s traveling around trying to find his sister who was one of the women from the first batch. As you’d expect, they run afoul of Jason and he starts picking them off one by one, utilizing his trademark machete as well as a bow and arrow and a few other tools he finds nearby.

The movie’s nowhere near perfect, though. It definitely follows that late 80s slasher trend that was continued throughout most of these 00s remakes where the soon-to-be victims are all either complete asshats or, at the very least, unlikeable caricatures of stereotypes. This movie’s got the drug obsessed potheads, the jerky rich guys, the girl who sleeps with the guy as soon as his girlfriend leaves the room and the unfortunate nice girl who gets swept up in all this madness. The general idea behind creating characters like this is that audiences won’t mind seeing jerks get iced. There’s a bit of truth to that, but many horror fans would argue that it’s far more interesting to see characters we like in danger than ones we could care less about.

Still, this is a slick looking horror film with a super-intimidating actor under the Jason mask plus a story that mostly makes sense within its own rules. Some characters make wildly stupid decisions, but that’s to be expected when they’re drunk, post-coital, high or on the run from a maniac the size of a redwood. While the movie doesn’t necessarily add anything but slickness to the Friday the 13th franchise, I also don’t think it detracts like the Halloween remake did.

I would like to pose a question to my fellow Jason fans that gets into spoiler territory for this film as well as the original, so if you haven’t seen them you might want to move on. What did you think of the very end where Jason pops out of the water to grab the survivors? Personally, I’m on the fence. On one hand, I like the homage to the original, but it also felt really forced. We spent this whole time dealing with what seemed like a very human villain and then he comes back with this supernatural craziness? If they wanted to go with this kind of ending, maybe it would have been wise to avoid a wood chipper as a means of stopping him. How does he come back from that with his head intact? If it’s a dream, like some of the other water pop-outs, it’s not my bag. 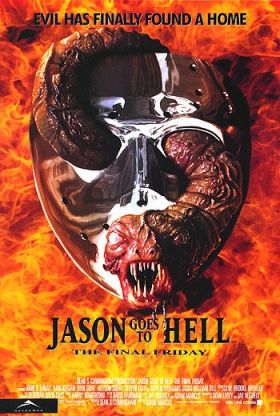 In the process of watching all the F13 films, I of course returned to the one I liked the least, Jason Goes To Hell. This is one of those cases where I remembered not liking the film and read my old review which was overly negative, but couldn’t remember any specifics aside from the fact that they got rid of Jason and used a worm-thing to transfer evil from one body to the next.

Maybe I’m in a much different place mentally these days or maybe a complete lack of expectations made for a better viewing experience, but I like this movie more this time around. I mean, it’s not great (or even all the way good), but it’s not as terrible as my memory told me it was. There are three main problems with this film: it shouldn’t be a Jason movie, the directing is wonky and the casting was bad.

If this was simply a supernatural slasher movie about an evil transported from body to body in search of a perfect specimen, it’d actually be pretty cool. But when you take one of the most iconic killers of all time and remove him from all but two big chunks of the film, you’re not really making a new Friday the 13th movie.

As far as the directing goes, I don’t think this needs much explanation. Some elements of this film are just dumb. But, even if they weren’t there are some supremely strange choices. Jessica returns to her house to find her mom’s co-worker (and a childhood friend, possibly) cleaning her dead mom’s blood out of the carpet. This scene isn’t necessarily acted poorly, but it is staged in a supremely strange manner. These two old friends start catching up (not weird) about five yards from the gigantic blood stain (weird). Oh, also, the friend doesn’t know about Jessica’s baby even though she spent a lot of time with the kid’s grandma AND knows the father. That just doesn’t make sense.

It’s not easy separating the acting choices with the directing ones in this film. Everyone related to Ma, the diner owner, is awful. They’re poorly constructed characters performed in this ridiculous, over-the-top manner that made me bristle. On the other hand, you’ve got Steven Williams as the bounty hunter who somehow knows EVERYTHING about Jason and yet has never killed the maniac himself. This guy thinks he’s so Eastwood it’s annoying. You don’t need to growl everything to let us know you’re a badass.

And yet, I can’t completely write this movie off. Like I said, it’s an interesting story. Plus, the special effects are pretty great at times. The part where that guy basically melts was pretty gross and that little Jason monster made me cringe.  At the end of the day, this could have been a better movie with a few changes or maybe another pass or two in the editing/writing phase.