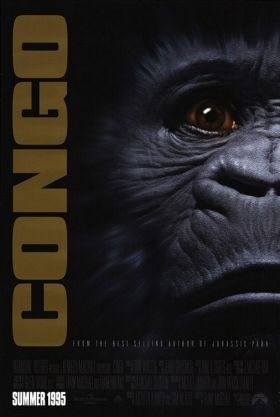 As I’ve said before, I’m a big fan of How Did This Get Made, the Earwolf podcast where hosts Paul Scheer, June Diane Rapahel, Jason Mantzoukas and a special guest all watch a movie and then pose the title question, usually in awe of its badness. When I saw that this week’s film, Congo, also happened to be on Netflix Instant, I figured I’d give it a watch ahead of time so I could be in on the gag a bit more.

The plot as presented in the film is pretty complicated, with lots of motivations, but the basic idea is that various people are all going to one place in the Congo and wind up working together. Laura Linney’s going to see if her former fiance/explorer is still alive (and also see if communications-enhancing diamonds really exist there). Meanwhile Dylan Walsh is a scientist bringing gorilla Amy back to her home after teacher her sign language (which gets interpreted to voices thanks to a contraption). You’ve also got Tim Curry looking for Solomon’s Mines and Ghostbuster Ernie Hudson along as their guide plus a few others.

Most of the film is actually about the group traveling by various forms of transportation to where they want to go, Once they get there, it turns out there’s a small army of super-aggressive white apes guarding the actual mine. Oh and it’s also on a volcano, so there’s your ticking clock.

For about 2/3 of this movie I was thinking to myself, “Sure, there’s a lot of travel and Amy the gorilla is clearly a person in a suit, but I don’t know if this is up there with other HDTGM fodder.” And then the ending happens. Guys, it’s bonkers. There’s lazer guns and fire and monkeys killing people and people killing monkeys (lots of that actually) and terrible CGI and an air balloon.

At the end of the day, I don’t regret watching the film. I actually enjoyed the adventures parts and even got to enjoy some of the characters — Hudson is SUPER charismatic in this — plus, it’s always fun to actually watch these movies before listening to the podcast. I still enjoy the episodes referring to movies I haven’t seen, but like I said above, it’s more fun to be in on the gag. Still, it’s not exactly what you’d call a good movie. In fact, there is a good movie in here and it’s the one featuring Bruce Campbell as a jungle explorer, but he doesn’t make it past the first few minutes. Oh, SPOILER warning, I guess.