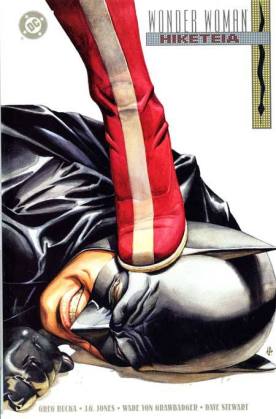 Back in my Wizard days one of the editors was a huge Greg Rucka fan. I was familiar with his Batman work at the time, but not the variety of other comic and novel projects he’d worked on. Over the years I’ve become a big fan myself, both of his comics and the man himself. A few weeks back I was thinking about Wonder Woman comics and remembered that he did a pretty substantial run and headed to my library website to see if the books were available. As it turns out they all are, so get ready for a few Greg Rucka Wondy posts in the next few weeks. The Hiketeia, a 2002 graphic novel drawn by J.G. Jones is a pretty simple story that bridges Rucka’s Batman and Wonder Woman work by having a murderer from Gotham asking for sanctuary and offering her servitude (a ritual known as The Hiketeia) to Wonder Woman which she accepts. Having given her word, Wonder Woman is compelled to protect this woman even against her trusted ally and friend Batman as the Furies keep watch. I really enjoyed Jones’ artwork in this book. I didn’t enjoy him as much on something like Final Crisis, but in this case, he really nails Wonder Woman’s power, even when she’s wearing jeans and a tank top. He’s got a lot of dynamism too that works as easily when drafting the dark Batman and the light-loving Diana. I also like that we’re dealing with an established version of Wonder Woman. I don’t want to rag on the New 52 too much — especially because I like Brian Azzarello’s take on the character — but there’s just not as much history there. This book comes from the era of DC Comics I’m most familiar with and was most interested in, so it’s cool to see how well Batman and Wonder Woman respect each other, even if they don’t get along particularly well in this story. The Hiketeia acts as a great sampler for what I’ve read of Rucka’s Wonder Woman run so far. It’s appropriately steeped in Greek mythology and custom, which is exactly how a person built of clay from an island filled with mythological Greek women should be. You also get a sense of the majesty that surrounds Diana, which is a huge part of the upcoming run. 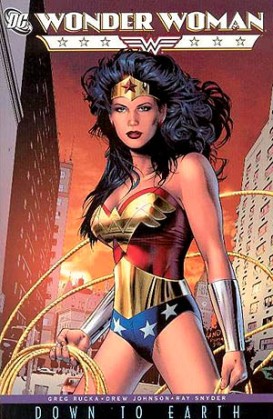 Not long after The Hiketeia, Rucka took over as the regular writer on Wonder Woman. If you’re picking this book out of the blue, here’s a few things you need to know. 1) Wonder Woman was a goddess for a little while, but isn’t any longer. 2) Her home island of Themyscira is known to the world and has declared itself a country. 3) Wonder Woman is not only a solo hero and part of the JLA, but also the ambassador for Themyscrira to the United States.

Down To Earth is basically the first third of a movie that you don’t get the end of until later in the run. Rucka’s playing a long game here and gets a lot of balls rolling that pay off in various ways. Our entry character here is Jonah, a new embassy worker joining the team as Diana’s book, a collection of essays and speeches, hits the world. What they don’t know, though, is that a woman named Veronica Cale is gunning for Wonder Woman, going so far as to bankroll a slander campaign against her that involved right wing-esque complains of her Amazonian heritage, killers and Dr. Psycho.

This volume also sets up Ares machinations amongst the gods, Diana’s more nature-based sense of heroism, the return of the Silver Swan and the near-destruction of Paradise Island. If you’re looking for a one-off Wonder Woman book to read, this is not the one for you, but if you want to invest yourself in a classically plotted run of comics, this is for you. 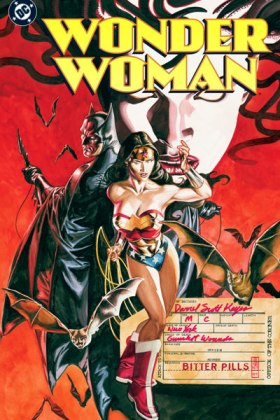 Bitter Rivals basically carries over all of the elements from the previous book, adding a few more pieces of information — like Cale’s origin story and why she has a mad-on for Wonder Woman — to the mix while also keeping the larger mysterious interesting enough to keep me along for the ride.

With Wonder Woman’s deck shuffled pretty heavily in the previous volume with the uproar against her, the murder of one of her opposers, Circe teaming up with the Gorgons, Silver Swan’s potential recovery and Paradise Island being nearly destroyed.

In this one, Wonder Woman goes to Cale’s partner for help in figuring out what’s wrong with Silver Swan. Batman also shows up to let her know that Dr. Psycho had something to do with the death of the aforementioned opposer. The book ends with a fight between everyone and Dr. Psycho and the return of Medusa which basically makes it the mid season finale of the run.

Another chapter of Rucka’s overall story, Bitter Rivals is, again, not a good entry point book. It’s part of a larger whole. You could probably jump in here and figure out what’s going on, but that’s silly. We’re used to doing that as comic readers, but when it comes to Rucka’s Wonder Woman run, you’re dealing with five books and 30-some comics. It’s not such a big deal to track them all down and read the whole thing. That’s my plan, assuming I can ever get my hands on the third book from my library (I’ve got the other two sitting right here).

Before signing off here, I want to say a few words about Drew Johnson’s art. He’s not an artist that I had an opinion on going into these books, but I’ve got to say, I found his pencils to be really solid and majestic. Sometimes, things feel a little slight, which is a misstep when you’re dealing with a character like Wonder Woman who is supposed to be surrounded by a sense of majesty, but overall, he really got the hang of things as these first two books got going. His Dr. Psycho is super creepy, but I think his Veronica Cale is the best of the bunch because she’s supposed to have her own majestic quantity, but housed in a human form that’s got a darker interior than Diana. He nailed her right off the bat and I’m really excited to see how things go from here.