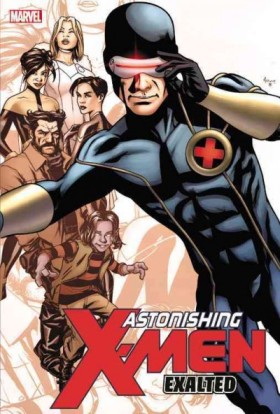 I can’t seem to stop reading X-Men comics these days! I’m on quite a streak thanks to my library system having a huge selection. Not everything has been a hit, but I figured I’d run down my experience with these books outside of the usual Trade Post format.

My buddy Brett White is a huge X-fan, so he was the first person I went to when trying to figure out which of the many books to request. On the top of his list was Marjorie Liu’s run on Astonishing X-Men. I looked into it and saw that Greg Pak did the arc before hers, so I requested that one first. Astonishing X-Men – Volume 9: Exalted

collects #44-47 of that book plus part of a Warren Ellis/Adi Granov story called Ghost Boxes that plays into this story of alternate dimensions drawn by the excellent mike McKone.

Like the rest of the books on this list, this one spins out of Schism and then leads into Pak’s X-Treme X-Men (something I didn’t realize when I read it). Exalted is about as much up my alley as you can get because it’s an alternate reality story featuring slightly different versions of the characters you know and love. Wolverine’s got god-like adamantium and is also kind of old-timey, Nightcrawler’s a kid, Kitty Pryde’s a badass and Emma Frost…wears a different revealing white costume.

These characters, as well as 616 Cyclops, all wind up in a reality where a version of Charles Xavier figured out that mutant powers can be used to keep their ruined earth together. Our Cyclops is just one of many who have been taken from their homes to keep it all going, but Scott shows why he’s different and gets back home all with excellent flourish from one of the best pencilers in the biz Mike McKone. I don’t think this story will win Cyclops any fans, but it seemed to be a good character study for him during this particularly trying time. Plus, he’s not a jerk like he is in so many of his other appearances which was a huge plus.

From there I moved on to the first volume by Liu with art by Mike Perkins. Called Northstar

, this book picks up in kind of a crazy place with Wolverine heading downstate from the Jean Grey school to recruit Gambit, Northstar and a few others to stop the Marauders who are under some kind of mind control. It’s actually a little difficult to catch up with as the story just races along as you try to figure out what’s going on.

As you can imagine from the title, Northstar grabs much of the spotlight as he and his longtime boyfriend Kyle deal with a relationship that involves one half fighting supervillains on the regular and the other being a normal dude. As you can tell from the cover, they get through their problems and get hitched! I thought this was a really smart, honest look at relationships as they would happen in a world with super-powers which I really enjoyed. I wasn’t as big a fan of the artwork. I absolutely love Perkins’ work on Captain America, but it felt a little looser or sketchier this time around. That might be a change in the inking/coloring team, I’m not quite sure. Either way, I’m still on board with this comic and actually have the next book waiting in my to-read box from the library!

Brett was also very excited about Brian Wood’s run on X-Men, so I got my hands on the first two volumes,  Blank Generation

which collect the end of one volume of that book before it was relaunched as the all-female title of the same name. On Cyclops’ side, this Storm-lead team flies around in a jet trying to stop problems before they threaten mutantkind.

Unfortunately, this one didn’t grab me as much because I wasn’t very interested in a story about ancient mutant DNA being discovered and used as a weapon against modern day mutants. The idea of “there are other kinds of mutants!” felt familiar (see: Supernovas) and I’m not even that well-versed in these books. I don’t mean that it felt copied or anything like that. It’s just one of those things that happens with books like this that have been around forever: story similarities can really stick out and distract.

I mentioned that to Brett and he said that he really appreciated how the team of Storm, Psylocke, Domino, Pixie and Colossus interacted with one another and became interesting characters with unique outlooks on life and mutanthood. I totally get that and appreciate what he’s saying, but the things that they were talking about didn’t grab me too. It’s kind of like hearing a really interesting person talk about something you have zero interest in. It’s too easy to tune out. I also have to say that Cyclops has a stink on him as a character that I just can’t get over. He has an understandable point of view, it’s just not one I want to read about, so I’m less inclined to get into the spinoff books aligned with his side (even if Storm clearly feels the same way about him that I do). Still, I’d be interested in giving the next volume of X-Men a shot to see how else Wood plays with those characters.

. The collection I read was the hardcover which includes the first 10 issues of this book in which a dying Beast travels back in time to bring the original teenage X-team to the present to show Scott Summers how crazy he’s been post-Schism and AVX in order to avoid a mutant apocalypse. When/if they succeed, the kids will go back and presumably have their minds erased by Professor X to avoid time paradoxes.

These first 10 issues bring the kids to the present, show them to the rest of the Jean Grey school, bounce them off their modern day counterparts, get them involved with Wolverine (of course) and throw them up against Cyclops and Co. a few times. While I’m sure the point of this book is to build to a larger story, I was impressed with how well each story flowed into the other while also taking side trips to focus on the different characters. That Bendis guy sure knows what he’s doing!

And so do artists Stuart Immonen and David Marquez. I’ve known Immonen since his days drawing Superman comics in the 90s. In fact, I think he was the first artist whose artwork made me realize that not all artists drew the same way. He’s changed quite a bit since then and I dig this evolution. The pages in this book capture the action as well as the “acting moments” while also offering robust characters. He reminded me a bit of a less cheesecake-y Terry Dodson. Then Marquez comes along and does his thing which is also big and bold, but with its own style. I liked both and appreciate that they went for artists who fit in well together.

My only problem with the book is that it is not easy to follow if you’re not familiar with whatever was going on with the X-World at the time. I try to just dive in with these things and use whatever existing knowledge I have plus whatever is stated in the book to get by, but it was tough this time around. It doesn’t help that, to my mind, X-Men is up there with the Legion of Super Heroes when it comes to difficult-to-casually-follow comic teams. There’s a nice text box in the beginning of the book that explains Avengers Vs. X-Men, but there’s no explanation for why Cyclops and Magneto change costumes towards the end. But, these weren’t “Shut it down!” problems. In fact, I’m trying to figure out what I’m missing so I can then request those books from the library and see what’s up.