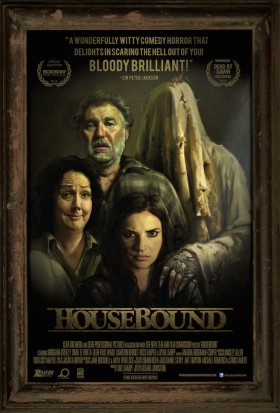 As an avid listener of my favorite horror podcast Killer POV, I hear about a lot of movies that sound cool. That’s where I heard about You’re Next and Resolution, both of which were awesome. The only problem? It’s hard to keep everything straight, especially because they’re usually talking about films they’ve seen at festivals or screenings and it takes a while for them to show up on Netflix. Luckily for me, I remembered them talking about Gerard Johnstone’s Housebound and then the movie popped up on Instant, so I gave it a watch yesterday and really enjoyed it.

Here’s all I knew about the film: a troubled young woman gets sentenced to live in her mom’s house for several months which may or may not be haunted. Also, it mixes in healthy doses of comedy with the scares and has a particularly Kiwi sensibility. Really, that’s all you need to know. Go watch it, then read the rest of the review, because going in blind is the best way for this film.

Okay, have you seen it? I’m not looking to spoil the whole thing, but I love how this movie plays off, not just the thoughts and superstitions of the people in the story, but also my own experiences as a horror fan. Like anyone, I’ve seen my share of haunted house stories, so even though I don’t believe in that kind of thing in the real world, I’m totally open to it happening in the world of this movie. So, that being the case, I found myself buying in to what I was presented because that’s part of the game. The way that Johnstone and the actors played with those expectations and yanked me around was just fantastic.

We’re in definite plot SPOILER territory with this paragraph, so consider yourself warned. I also loved how basically everyone in this movie is wrong about something. Theories are floated as if they’re fact, seem plausible and then get smashed by someone coming along and telling the truth. I love when stories do that because far too after then hero knows more than they need to just to get to the end. I also really enjoyed the Eugene reveal. It’s such a cool idea how he could be mistaken for something supernatural. Plus, I’m a sucker for reinvisioned gothic haunted house tropes being worked into modern stories.

Okay, no more spoilers. I really enjoyed this movie and think you should check it out immediately. Go! Now!