Jason Aaron’s one of those comic writers whose career has interestingly intersected with my career as a writer about comics. When I first started at Wizard one of my buddies and an editor at the magazine was huge on his Vertigo series The Other Side. I didn’t read that one, but I did check out the Ripclaw one-shot he did as part of Top Cow’s Pilot Season not too long after that and the first few books in his Scalped series.

The first of his works that really captivated me, though was Ghost Rider. But it wasn’t until my second attempt at reading it. As I’ve written, I love the down-and-dirty, grindhouse-y tone of that book and the wild places he took it. I assumed for a while that that was pretty much his wheelhouse, but as I’ve learned recently from branching out into X-Men: Schism, Wolverine & The X-Men, Amazing X-Men, Thanos Rising, Incredible Hulk, Astonishing Spider-Man & Wolverine and Thor: God Of Thunder, this guy has more tricks up his sleeve than all the magicians in Vegas.

The best thing about Aaron’s books is that they never do what you expect them to. I’ve been reading comics for 2/3 of my life, so at times it feels like I’ve seen it all. Then I open up WATX and I’m blown away by the mix of teen and team book ideas or Thor and there’s a trio of Thors or Astonishing and we’re dealing with time travel craziness. Aaron doesn’t just zig when you expect him to zag, he’s usually on a whole different path altogether. 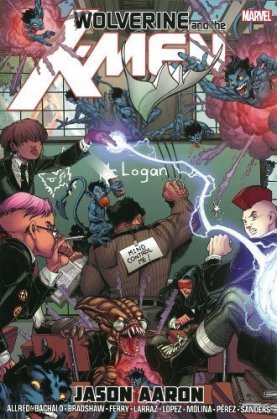 I’ve now read through all of the wonderful WATX as well as the first volume of Amazing X-Men which ties up a few loose ends. A lot of teen superhero books wind up hitting the same adolescent notes, so the more of them you read, the less interesting they can become, but the great thing about this comic is that it mixes those elements with the overarching ideas of this being a school, the teachers being superheroes and, most importantly, mountains of FUN. I’ve read a lot of great comics in my time, but I’m having trouble thinking of one that I’ve had as much fun with since the days of Justice League International.

He also did the thing that Corporate Comics rarely do for me anymore and that’s give me a sense that this thing that Wolverine started — the school — will have a long-lasting legacy into the future. I know future stories are made to be broken (or endlessly referenced and retrod) in these worlds, but this one feels solid and strong to me, like I was there from the beginning and now know that it will all be fine. And even if it never gets referred to again, I’m okay with that because I dig this story so much.

I’m far from an X-pert, but this remains one of my favorite and best experiences with this franchise to date. In fact, it was so good that I almost don’t want to bother with the other X-books. I did like delving into that first Amazing arc, though because it made me realize that Nightcrawler is one of the coolest characters around and I want to read more of his adventures. Also, not for nothing, but Aaron really delivered on the Bamf mystery. That gun was there in the first issue of WATX and he finally fired it 40-ish issues later with very satisfying results.

For a less involved reading experience, check out Astonishing Spider-Man & Wolverine. Going into something like this, I expected the usual kind of team-up stuff, but this one starts with our heroes back in caveman times before hopping through time and facing off against time-traveling hoodlums, Wolverine’s brother, Phoenix bullets and a combination of Dr. Doom and Ego, the Living Planet.

This book is packed with little nods to Aaron’s other books. The Orb was in Ghost Rider and the character of Wolverine’s brother Dog goes on to cause a good deal of trouble for his bro and his students in the pages of WATX which makes it not just a solid read in and of itself, but a piece of the overall Jason Aaron Marvel Puzzle.

From there I moved on to the first volume Aaron’s Incredible Hulk which finds Hulk and Bruce Banner mysteriously separated (by Doctor Doom, we later discover). Hulk’s doing okay living under ground for awhile until it becomes evident that Banner can’t live without his inner beast. As Banner goes more and more insane, turning everything from snakes to humans into gamma-irradiated monsters, Hulk gets drawn back in to try and help his former mental roommate.

Of all the books in this post, this one took me the longest to warm up to. I wasn’t a big fan of seeing Banner so damn crazy because I loved how he was treated by Greg Pak during his Incredible Hulk run, but it eventually made sense within the story and all came together. There’s only one more book in this run that I haven’t read yet (the library doesn’t have it, so I’ll probably check it out on Marvel Unlimited). 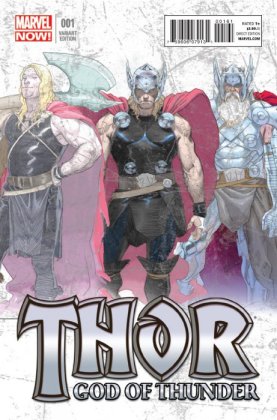 Right now, I’m halfway through Aaron’s third Thor: God Of Thunder book and am just blown away by what he’s doing. Aside from a few books here and there, I haven’t had a great experience with Thor comics, mostly because they tend to boil down to Loki pulling his half brother’s strings. That’s nowhere near the case with this series (at least for now). In the first two installments Thor faces a madman called The God Butcher who he faced as a young man, as an Avenger and as the King of Asgard far in the future. Again, I’ve been reading comics for a while, so I thought I knew where this was going, but I was wrong and I loved it. All three wind up coming together to fight this menace and save all the gods that have or will ever be.

Like his other books, Aaron tricked me into believing the threat was as high and real as it was presented to be. I don’t know how a writer does that, but when it works it’s so much fun to get sucked into something so huge and so epic that it took me back to the early days of reading comics when I really thought Superman was dead, Batman’s back was broken and someone else was going to be Wonder Woman.

I’m told that this book just keeps getting better and, as anyone paying attention to the comic book internet knows, the identity of the female Thor was revealed last week. I hadn’t thought about who might be under the helmet, but as soon as I did, I jumped back to the scene with Thor and this particular woman from one of these first two trades and it made all kinds of sense. I don’t care that I know one of the book’s major mysteries before going in, I’m still stoked to read more of Aaron’s Thor. I’m also excited to move on to Aaron’s Wolverine Omnibus volumes which are sitting here in my office just waiting to be read!

I’m glad I decided to try and catch up on X-Men all those months ago because it lead me to WATX and then on to all of these other magnificent comics. It’s always nice coming across a creator whose work you love so much, especially when they show a talent for diverse storytelling across various platforms and set-ups. It’s even better when you discover them a bit into their career which means you’ve got a lot to catch up on and even more to look forward to in the future!