A good buddy of mine sent me a box of awesome horror Blu-rays leading up to Halloween. I wrote about a few of them last week, but also wanted to give Stung and Return Of Count Yorga some blog love.

Stung was actually a bonus tossed in the box without warning. At first I wasn’t super interested because it sounded like a bit of Syfy or Asylum craziness with a plot revolving around giant wasps attacking an upscale garden party. But this Benni Diez-directed, Adam Aresty-written film is actually pretty damn delightful.

Our heroes are the owner of a catering company and her slacker employee who can barely handle himself when she switches from one shirt into another on the way to the event. He’s a bit too much of a goofball for my personal tastes (haven’t we seen enough of this character?) but he gets tangled up in the craziness of the events around him and starts adapting in the process.

Anyway, they wind up working some local bigwig’s party when these insane wasps start attacking. The stings are bad enough, but they also make their targets transform into gigantic wasps. Our heroes are joined in their drive to survive by Clifton Collins Jr. (who starred in Capote) and friggin’ Lance Henriksen, both of whom play against type a bit and also last much longer than you might expect.

I give Stung a lot of credit for not only featuring some impressive special effects (yes, there’s a lot of CGI, plus a fair amount of practical grossness) but also playing with expectations with what many would assume is stunt casting. I also thought it worked quite well as a nature-run-amok movie along the lines of Frogs. My own personal scare factor was boosted because I’ve been dealing with wasps under our siding all summer and hate those damn things. Whether you have wasps diving bombing your table or not, I highly recommend checking out Stung. It just went up on Netflix Instant, so it’s even easier! 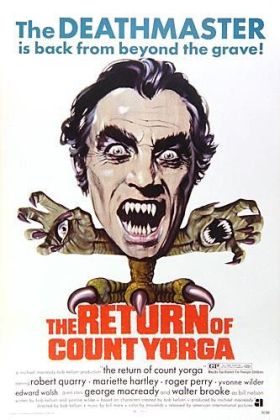 I also gave The Return Of Count Yorga a watch. I feel like I’ve always known about these movies (or at least the original one from 1970), but just never got around to watching either of them. I think I saw part of the first on Netflix a while back, but who can remember?

Anyway, in this film, Yorga (Robert Quarry) makes his come back because of the Santa Anna winds (sure, why not) and he soon gets to work turning the gorgeous Cynthia — played by Mariette Hartley — into a fellow undead minion. Along the way his vampire brides also turn an orphan boy who then leads them to Cynthia’s family. Soon enough everyone in the family is turned aside from a deaf woman. She goes to the police about the attack, but no one believes her because the vamps cleaned up the mess and the kid is on their side.

As I mentioned, Hartley is just captivating, but so is Quarry. When he’s just hanging out in slick guy mode — at a costume party no less — he’s mesmerizing. But when he’s in vamp mode? It’s a bit laughable. Instead of sneaking up on his victims, he puts both arms straight out and just charges at them (complete with white pancake makeup). Even with that, though, there are some pretty scary moments, though they mostly revolve around people telling the truth and not being believed or voices coming from nowhere potentially driving folks crazy.

So, yeah, it’s a little goofy at times, but there’s also enough cool in this movie for me to recommend it if you dig on early 70s movies with some psychological scares and great actors.